Never Quit on a Hill

Writing About The Holocaust

Earlier this week, Karol Neilsen wrote about the inefficiency of writing and how not to quit. Her new memoir, Black Elephants, was just released.

For a long time, I didn’t want to add historical context to


, because I thought it would turn into a history book. But I kept thinking of a favorite professor at the Columbia University School of Journalism, who published memoir and narrative nonfiction books, one of them a finalist for the Pulitzer Prize in Nonfiction. He encouraged writers to set stories in context, but I resisted until a scholarly travel writer shared his opinion that the Gulf War was a “piss in the bucket” and that Saddam Hussein never had chemical weapons. 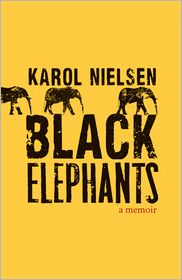 I knew then that I had to explain the larger narrative of history and the slim slice that I’d witnessed. I had published op-eds and travel essays about my adventures in South America and Israel during the first intifada and the Gulf War in the Stamford Advocate, my hometown newspaper in Connecticut. So I already knew that moment of history intimately. But I went on a rigorous fact-finding mission, reading dozens of books and articles and documents, fleshing out context spanning World War II through the wars in Afghanistan and Iraq. It was hard reading. Memories bubbling up in uncomfortable ways. But it was necessary for the book and, ultimately, healing for me, as I wrestled with the ghosts of my past.

I thought I was done with the book by the time I found my new agent. She told me that she didn’t want a little book deal. She wanted a Big Book Deal. So she made me write rewrite the synopsis, hoping that I could capture the essence of my story and style in 15-20 pages. I’d send her a new draft of the synopsis every few months, wait for her comments, then go back to the drawing board. She wanted more reflection. Dig, really dig.

After a year and a half of this, I asked if I was the slowest writer she’d ever worked with. She told me that she’d made an award-winning journalist work on a proposal for four years before she sold the book. I had done two Ironman triathlons, but somehow this seemed far more demanding of my endurance. And my mother’s. She asked if she could try to submit the book to independent and university presses. I wrote to the agent who said she hoped I’d find a home for the book. My mother became my agent.

She is a techie who could have been a cyber-detective, because she can dig up about anything on the internet. She put together a list of presses that publish memoir and mailed the proposal, using only a short synopsis similar to the one that appears on the published book instead of the opus I’d worked on for so long. Within three weeks, the editor-in-chief at the University of Nebraska Press read the proposal and asked for the whole memoir. She wrote a few weeks later to say that she enjoyed the book and wanted to send it out for peer review.

Both reviews asked for more reflection. I wrote a long response about how too much reflection could slow the pace and darken the tone. My editor suggested that I write a short letter, explaining how I could deepen the narrative. You want to make sure it comes through to the reader, she said. So I wrote a brief note about how I could revise the book. The editorial board approved it unanimously. I was encouraged. And terrified.

By now, I knew what the story meant, but how could I force the reader to agree, after hearing so many takes on the root of our troubles, and how could I do it without making it a heart-wrenching tale? It was delicate work, inserting a line here and a paragraph there, adding a chapter toward the beginning and expanding another at the end. The revisions were a success. The press officially accepted the book for publication, and later selected it as a promotional giveaway at BookExpo America this spring.


, already a bestselling title for my publisher, came out in October through the paperback imprint, Bison Books. Kirkus Reviews said it is “poetic,” “filled with idealism and adventure,” “a memorable read.” The Christian Science Monitor ran a reader recommendation in its print edition, calling the memoir “moving and thought-provoking.” Poets & Writers selected it as a New and Noteworthy Book. I signed books at my launch party at Idlewild Books and more after a talk the New York University Bookstore. Then I visited the Big Blue Marble Bookstore in Philadelphia to talk about Black Elephants with the Women of the World Book Club. A psychologist, who spent 18 months in Iraq helping soldiers, identified with my experiences and endorsed my approach to healing. Write, Pray, Swim, Bike, Run.

A Book and Its Translators

It was a freezing afternoon outside Warsaw in March 2012, and I was sitting in a cramped hut listening to ...

What does a concentration camp look like?Does it look like this?(Set aside for a moment the fact that it’s a ...

The Inefficiency of Writing

Karol Nielsen’s memoir Black Elephants has just been released. She will be blogging all week for MyJewishLearning and the Jewish ...