I became Orthodox under the guidance of someone who advised me to run from it. Rabbi Dr. Barry Freundel, the rabbi of the Kesher Israel Congregation in Washington D.C. — whose name you might recognize from the 2000 presidential election, when he was constantly quoted as “Joe Lieberman’s rabbi” and asked deeply-thought questions like, “If a nuclear war breaks out on Shabbat, will Senator Lieberman be allowed to help out in the ensuing battles?” 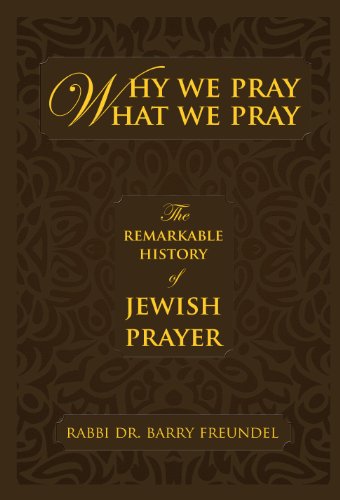 In addition to being a rabbi, he holds advanced degrees in chemistry and biology, and is a fiendishly rational thinker. While many people are attracted to religion through mystical stories and supernatural powers, for me the draw was the exact opposite. I was already totally nuts. I needed something to ground me, a rational set of rules to lead my life by. I started by going to Rabbi Freundel’s weekly halacha shiur — a three-hour class about everything from washing your hands before getting out of bed to whether one needs to tie tzitzit on a rain poncho to what happens if you start eating a ham sandwich, realize it’s not kosher, then get a craving for macaroni and cheese — are you allowed to? (Yes: because ham doesn’t fall under the category of kosher meat.) “Run the other way,” he said. “We are competists.” I’m a masochist. It just made me hungry for more.

Anyway. Rabbi Freundel has a new book, Why We Pray What We Pray, and it’s a doozy. The book is an excellent field guide to Jewish prayers, perhaps the most well-conceived and fully-realized book on the subject in English to come out in years. (And just so you don’t think my opinion is weighted, he is also the man who forced me to type up 112 pages of notes about tefillin. Five times.) What the book lacks in scope, it makes up in depth — choosing just six different prayers, giving their history, previous incarnations,

Which might sound boring under someone else’s wing. The first chapter is dedicated to the Shema — and Freundel picks apart its history step by step, discovering that, in its 3000-year lifespan, the prayer once included several other parts of the Torah — and things that didn’t even come from the Torah, including the second line of its present incarnation — as well as one whole Torah portion (this part was ultimately excised, on the grounds that it would take too damn long for normal people to get through) and the entirety of the Ten Commandments. Later chapters go through other prayers, some of which (like “Nishmat”) have just become known as long and sort of meandering in the present liturgy, others (such as “Alenu”) have become sing-songy and equally meaningless for us. This book is an adventure in the best way, a book that makes us love words again.

Reading Why We Pray, I sometimes wished that Freundel, and not some boring dictionary-like rabbi, wrote the lines of commentary underneath the prayers in my normal old prayerbook. Then I changed my mind. Those little two-line insights are good for ignoring on a day-to-day basis, and jumping right back into the prayerbook. These stories are at their best for actual reading, for paying attention to and for diving into. As Rabbi Dr. Jonathan Lord Sacks says (in this superb video), Jewish people are great at being kind to others and at studying, two of the three pillars on which the world rests. The praying part — taking these words that we say every time we set foot in a synagogue* and giving our prayer meaning, a life beyond our lips, and a meaning above the dullness of mundane routine — is what we need to work on.

And here, folks, is where it starts.

As promised, here is the complete text of Sarah Margles’ speech about the Prayer for the State of Israel (mentioned ...

How Do I Become an Empowered Jew?

Praying (They Don’t Think I’m Gonna Blow Them Up)

I’m reporting to you live on location from the airport lobby. At 6:00 AM, the place gleams with a shine ...