Molly Birnbaum is the author of Season to Taste: How I Lost my Sense of Smell and Found My Way. She will be blogging all week for the Jewish Book Council and MyJewishLearning’s Author Blog series.

The first book I ever wrote was with my grandfather, Morris, a big-boned businessman who lived with my grandmother in upstate New York. He was a talented amateur artist. I was five.

We wrote a whole series of books together, in fact, over a number of years, lying belly-down on the living room rug, surrounded by sheathes of blank paper and boxes of colored pencils, pastels, and crayons. I spun tangled stories — often minute variations on the same one about a nurse, her puppy, and the bright red convertible they drove around town — that my grandfather transcribed in his spidery scrawl. He would then illustrate the blank pages of our makeshift books with intricate line drawings of people, animals, and cars. Under his watchful eye, I filled them with waxy strokes of color.

For some reason most of our stories were set in Florida. This was most likely because my grandparents, like many Jewish grandparents, wintered there. But also because I loved the exotic curves to palm trees on paper, and the line my crayon took when I filled them in with green. At the time I thought I wanted to be an artist. It was only later that I realized it was the writing that drew me in.

My grandfather passed away in 2008. I was 25 at the time, and it had been many years since he and I were close. Divorce and drama had soured the relationships among many of my family members and I had pulled away, content with avoidance. When I thought about the grandfather of my youth, I remembered a tough guy with a loud laugh, famous for 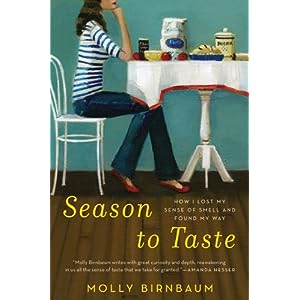 refusing to wear a jacket when the winter temperatures would plunge far below freezing. I remembered his love of dried apricots, which I thought looked like wrinkled brains, and the fact that he put extra salt on everything. But when I flew from California, where I was working as a newspaper reporter, to New York for his funeral, I began to think again about those books.

I loved those books. So did he. Even between my childhood visits, when I was at home with my family in a suburb of Boston, my grandfather would send me new books in the mail — some that we had talked about, a few we worked on together, but many he created completely on his own. They arrived in big manila envelopes that had decorated with whimsical scenes of elephants and trapeze artists rendered in thick black ink.

My first book,
Season to Taste: How I Lost my Sense of Smell and Found My Way
, will be published on June 21st by Ecco/HarperCollins. It took me years to write. There are no pictures inside. But I wish that I could send my grandfather a copy, shiny and new. I’ d mail it to him in a thick manila envelope, covered with sketches of elephants, apricots, and palm trees. My own drawing would be far more amateur than his, but I’ m pretty sure he’ d be shocked to see how far I’ve come.

Come back all week to read Molly Birnbaum’s posts for the Jewish Book Council and MyJewishLearning’s Author Blog series.