Now I did not know this but if you were to visit Arlington National Cemetery, there are three seperate plaques that are set up to memorialize different religious chaplains that have been killed as a result of their military service. There is one dedicated to chaplains from World War I and the other two are dedicated to Catholic and Protestant chaplains that have died in subsequent wars.

However, between 1943-1974, there were thirteen Jewish chaplains that were killed while in service. But since they weren’t involved in World War I, nor were they Catholic or Protestant, they have been excluded from the memorial. Hopefully, until now.

Congressman Anthony Weiner and Senator Chuck Schumer, both from New York, are sponsoring a bill that would create a fourth plaque to be placed into the cemetery.

But like most things in Congress, bills sound easier to pass than they actually are. While there is bipartisan support for the bill, there is a worry by some supporters that many congressmen are weary about giving official memorials to just anybody.

Nevertheless, organizers of the bill have raised about $50,000 in order to pay for the memorial and have done proper background checks in order to confirm the exact names and correct number of chaplains that need to be honored. 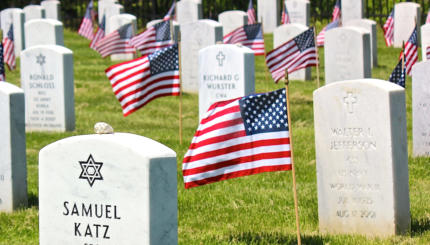 How does a Jewish military funeral work?

Sometimes the chaplain is the only one who can mourn.

The origins and development of the interfaith movement in America