Here’s the thing. If God was able to split the sea and allow the Israelites to pass through it, why didn’t he just delay the Egyptians a tad longer so they could have spent a little time to leaven their bread? I mean, he just killed thousands of Egyptians with the tenth plague! You’re trying to tell me that the only way the Israelites would have freely made it out of Egypt was if they didn’t bake bread? Plot hole, God. Major plot hole.

Speaking of which, how good is bread? Am I right, people?

Alright, here is every link you need for the weekend.

Seriously though, who wants to bake challah?

I made it all the way to Day 1 of the Omer, and then I forgot. Are you still going strong?

This Sunday night and Monday, Jews around the world commemorate the victims of the Holocaust with the annual Yom Hashoah.

The Territories–the West Bank, Gaza Strip, parts of Jerusalem, and the Golan Heights–have had a large impact on the growth and history of Israel (to say the least!). Learn more about them.

Okay! See ya next week! 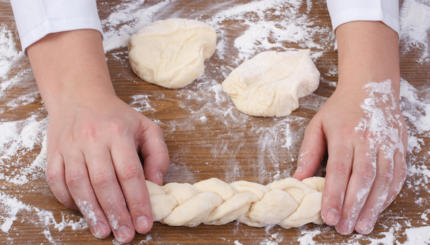 Tools and Tricks for the Best Challah

For a variety of challah recipes, ranging from Honey Whole Wheat to Double Chocolate Chip to Gluten-Free, click here. People often ask for my ...