— most of New York is a neat, orderly grid, but once you hit the Manhattan Bridge, Canal Street turns into a sudden mountain, half going up and half going straight down, and you’re never quite sure when a street is going to splinter into three different streets and when it’s going to dead-end in the middle of a block. (It’s twice as cool because Fred’s a comic artist and his story Johnny Hiro: Half-Asian, All Hero, which takes place on these very streets, has just been excerpted in the 2010 Best American Comics.)

In the middle of all this, Fred and I both realize that we are massively hungry. My stomach muscles, through a few years of this, have grown accustomed to being both kosher and out late. My stomach growls, I reply that we are out on the town and that there are no kosher restaurants around, and it quietly sulks to itself in a corner.

Fred is not so disciplined. “I know a great place right around here,” he says. And then he suddenly vanishes around a corner, disappears, and takes me along with him.

I don’t usually sit with people in restaurants. I feel too much like a second-class citizen. Everyone else is pigging out, eating great-smelling food (and food always looks better in non-kosher places) and you’re smiling to yourself and telling them, don’t worry, you’re really in the mood for ice water.

But it’s late, and I haven’t seen Fred in a while, and I don’t want to kill the conversation. So we take our seats.

Is this a test? A test from God?

“I’m always weird about seafood,” I say. “Not just the kosher thing. It just feels like, is that stuff really dead? Was it ever alive?”

“Okay,” he says. And so he turns to the waitress and orders the pork soup.

I manage meekly to say: “I’ll just have a cold drink.” And I dash for the refrigerator.

Okay. But the truth is, I’m curious about trayf. How it looks. The way it tastes. The animals it comes from. And I’ve also been way curious about real Chinese restaurants,

the kind that real Chinese people eat in, because I’ve always suspected that the places where white people eat, kosher or not, are faking it, the same way that Jackie Chan exaggerates his accent in the Rush Hour movies.

Almost immediately, they bring a plate. It’s just a pile of bean sprouts, with a little lemon slice sitting on top. Is that supposed to be a salad? Fred ignores it. He’s like that with salads, though.

Then the bowl comes out, and it’s huge. He didn’t say “large” or “small,” but this soup is the size of a Thanksgiving turkey. There’s a stack of those special Chinese-food spoons upside down, in the same holder as the soy sauce and hot sauce. I’ve never seen that before. Fred takes one, and he breaks into his chopsticks, holds them close to the ground and whittles them twice, to throw off the splintery pieces. He dumps the sprouts into the soup, explaining that that’s what you’re supposed to do, which I never would have guessed.

And then he starts eating.

He alternates with the spoon and chopsticks, working his way through the meat and noodles. I ask him what that meat is, and from time to time he explains. The pink stuff floating on top is nearly raw. The chef does that in order to show you how fresh the meat is. Underneath, pretty much all the meat is brown or gray. There are a few marble-spattered parts, which Fred says are tendons. And then there’s a white bumpy substance, which he thinks (but isn’t sure) are the stomach lining.

“Are you sure? I thought gelatin was the hooves.”

I frown. Instead of ice-water, I have opted for a beer, and it’s hard to recall the basics of whatever I’ve read on animal slaughter. “You might be right,” I say. “My family-in-law makes this Yiddish food thing out of cow hooves. It’s these yellow cubes. I think they’re called gullis?”

“Oh yeah! My family makes something like that, too,” said Fred. “It’s called,” he said, and here ends the tale of charming culture-mixing, because he said something in Chinese that there was no way for me to understand, much less transcribe the next morning.

He scooped the last of the soup-meat dregs into his spoon with chopsticks and slurped it up. Then I let him have the last of my beer — call me a fundamentalist zealot, but I get squeamish about pork-breath in my beer bottle — and then we were out.

Thanks to No-Frills Recipes for the pork pic. 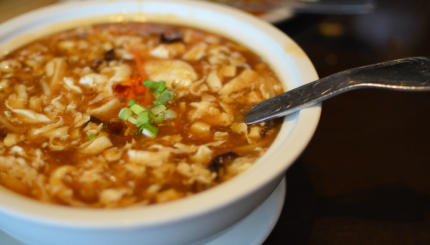 A savory and delicious soup with a sweet story.

That’s right–I have a new hero. I’m sorry, Uncle Phil from The Fresh Prince of Bel-Air, you’re going to have ...

What Chinese People Think about Jews

On Monday, Michael Levy wrote about Jews and Chinese Food. He is the author of Kosher Chinese: Living, Teaching, and Eating ...