There is that cheesy saying that goes, “Calories on Shabbat don’t count.” It was probably invented by your grandmother after you refused to eat your eighth piece of brisket.

Eating at Jewish holidays can be tough on your diet. It just seems as though everything is deep fried in chicken fat. And as great as that sounds to my hungry stomach right now, I know it is probably bad for me and my waistline in the long run.

In what can only be reported as the greatest news of all time, Mark Haub, a professor nutrition at Kansas State University, lost 27 pounds by only eating snack foods. Instead of eating meals, he would eat a twinkie every three hours, with the occasional bag of chips or Oreo cookies to change things up.

You’re hearing it here first. For the next six months, I will be eating a scoop of chopped liver every three hours. To change things up, I’ll occasionally drink a cup of schmaltz.

I hope you can make it to my funeral. 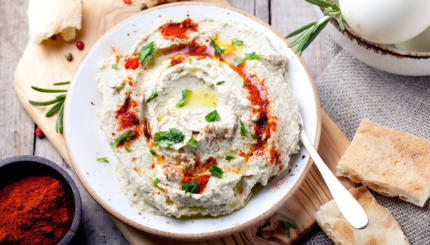 An easy recipe for eggplant.

7 Tips for Staying Healthy During the Yom Kippur Fast

Yom Kippur not only requires emotional preparation, but physical as well.