How Do You Say Goal in Hebrew?

I can’t get enough of Sayed Kashua. If you haven’t subscribed to Jewniverse, our new daily culture and inspiration email, do it now — we’ll send you something new and mindblowing every single morning. Last week, we wrote about a new sitcom about Israeli Arabs that blew my mind — and, judging from the discussion on my Facebook wall, I wasn’t the only one. 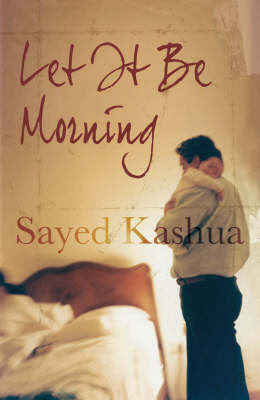 And now, because I am obsessive, I am slowly filling my brain with Kashua. I picked up his novel
Let It Be Morning
, which is as different from the Seinfeld antics of Arab Labor as you can get — and yet it still grips and twists your heart in the same way.

The nameless journalist narrating the story is an Arab reporter for an Israeli newspaper (just like in Labor). He’s on a low ebb, having been reduced from staff to a freelancer, picking up fewer stories, and caring for his infant daughter. He just moved from the big city to the Arab village where he grew up — he’s relieved; his wife is furious, but they can’t afford anything else.

A few weeks into they return, the village is surrounded by Israeli tanks. No one is allowed to leave; no one can come in. And the 150 or so pages that follow are a masterful slowed-down examination of existence, like Kafka or Sartre spending entire chapters detailing a scene, letting every adjective serve as the basis for a sprawling, meaningful flashback. But it’s anything but slow — it’s like one long, tense buildup before the intensity of the last 80 pages, which are a single extended adrenaline rush.

Lest you think that the book is a castigation of Israelis, let me just say that it shows both West-Bank Palestinians and Israeli Arabs at their worst, basest, and most morally depraved, and that even the Israeli government looks like a hero in the end. Kashua isn’t a political writer — or, he’s a hugely political writer, if only because he’s equally critical of everyone. Occasionally, I would have to stop reading and remind myself that all of Kashua’s work is written in Hebrew — and, therefore, he’s writing primarily for Jewish Israelis — and wonder exactly what he’s trying to tell them.

My biggest fear was that such an existentially-meandering plot would lead to one of those annoying postmodern endings. You know — where the tanks fade away, the village is safe, maybe one or two people are dead, but nobody knows what it means. Thankfully, Kashua is too much of a master storyteller for that — his last-act spin comes fast and loud from left field, enough of a shock to make you reread several sentences and yet totally in line with what’s happened so far. I know, I’m being annoyingly vague. But, once you read the book, you’ll thank me for it. And you will. Read it, I mean.

(Huge tremendous hat-tip to Hadara and Aadam for introducing me.)

Casspi Better Get Used To Losing

In professional sports, winning is everything. Sure, both teams can play hard, but in the end of the day, if ...

From Serious News to the Tabloids

Martin Fletcher’s newest book, Walking Israel: A Personal Search for the Soul of a Nation, will be available tomorrow. He ...

That’s What He Said.

In this case, “He” is actually Hebrew for “She.” But by the time you understand what I’m talking about, the ...