A dark, dark day in basketball. As the state of Kentucky rejoiced with five of their state college’s players being drafted in the first round of the NBA Draft, the Jewish world hung their heads in shame as no Jews were drafted. This ends the amazing streak of Jews getting drafted…at 1.

As mentioned a couple of days ago, Duke guard and Maccabi USA team member Jon Scheyer has entered the draft, but sadly, was left undrafted as the night came to an end. I can only imagine how he is feeling right now. When I went undrafted in 2008, it took me minutes (even hours) until I came to accept my fate. Luckily, I had already been hired to work at MJL, so I had a backup plan.

So hopefully Scheyer is reading this because I have a life plan for him. Come work for MyJewishLearning.com. You’d get to move to New York. They might be able to offer you benefits. The hours are reasonable. Believe me Jon, in this economy, you could do much worse.

But all hope is not lost. While not Jewish, Cornell center Jeff Foote has made some news in the Jewish world by signing a contract with Maccabi Tel Aviv. I’m sure he will be in for a shock when he finds out that Tel Aviv is less Jewish than Ithaca. Don’t say I didn’t warn you! And no Jeff, you can’t have a job at MJL, Scheyer is our man.

A concoction that no one saw coming. 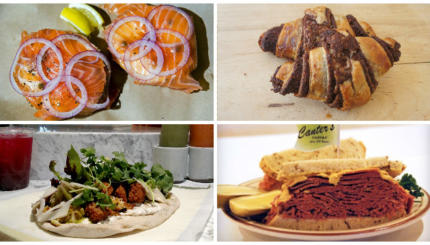