Slow news week I guess. You know not much is going on (even though SO much is going on) when it’s big news that Michael Jordan is sporting a Hitler mustache. But let me tell you something, even if Michael Jordan wanted to be a Nazi, I don’t think he would be chosen in the frat. He isn’t your “prototypical” Nazi if I do say so myself.

If you don’t know what I’m talking about, then watch the video below of Jordan’s newest Hanes commercial. In it, you can see Michael sporting what can only really be described as the Hitler ‘stache. But that’s not even what I find offensive about the video. Why are more people not offended by Jordan’s terrible Howie Mandel soul patch?

Michael, you were the epitome of cool back in the 1990s. There is an actual song written about kids wanted to be like you. That happened. And no one called you out for being an egotistical maniac. Now look at you! I just compared you to Howie Mandel. A fall from grace, sir. A fall from grace.

Also, a quick side note. The other guy in the commercial is secretly huge. Michael Jordan is 6’6 and that guy is almost looking eye to eye with him. As a short Jew, I’m impressed. 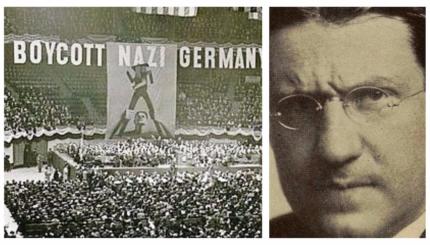