I usually don’t have any trouble believing impossible things, before breakfast or at any other time. But here’s today’s inscrutable news, courtesy of our friend Milhouse:

1) There is a Shoe Museum in Toronto.

2) It’s actually shaped like a shoe, more or less.

3) There’s a ritual in Judaism called chalitza, which is performed when a man dies and his wife is left childless and he has a brother who’s technically supposed to “produce an heir to perpetuate the name of his dead brother” — in other words, to, uh, sire her a child.* Chalitza is a way by which both parties excuse themselves from the transaction (or, they get out of having to, uh, procreate).

4) The entire ritual is performed with a shoe.**

5) The Bata Shoe Museum, according to our source Milhouse, has a special exhibition of chalitza shoes — that is, one of the very podiatrical implements used in the transaction of levirate marriage. I can’t see anything that separates them from normal shoes, except that they’re very old. Still, it’s pretty astounding to look at something as mundane as a shoe and to think, a long time ago in a land far, far away, that shoe was used in a ritual that changed two people’s lives.

_____________
* – Okay, this one’s not impossible to believe. I’ve read the story in the Torah before, and besides, I think I saw it as a child on an episode of “Picket Fences” and didn’t understand all the connotations, but more or less understood it anyway.

** – I knew that part, too. I still don’t understand how it actually works. Although reading our article on the subject is probably the closest I’m ever gonna get.

The Seven Roads to Hell (or: Dante’s Inferno adapted for Chassidic Jews)

Goldie Goldbloom is the author of Toads’ Museum of Freaks and Wonders, a novel about Italian prisoners of war in ... 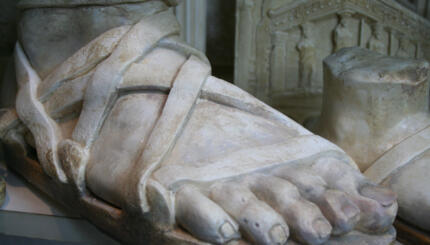 This rarely performed ritual releases a man from the obligation of marrying his deceased brother's childless wife.

Let it not be said that the Jews of the world have neglected the Internet as a way of spreading ...