If you haven’t gotten the flavour of Jeremy Moses’s writing, what are you waiting for? Here’s the direct link on MyJewishLearning.com to read the entire past year and a half of his blog oeuvre. Study it. Memorize it. You will never again be at a loss for a joke, a witty comeback, or an in-depth analysis of a prime-time reality TV show. Or just watch this incredibly viral video of Jeremy setting the world record for matzah eating:

We’re proud like parents that Jeremy has a new weekly column on National Lampoon’s site. Each week, he’s reviewing a YouTube classic video in exhaustive detail and deciding whether it’s one for the ages.

Probably more than any other viral video, â€œNuma Numa Guyâ€ has infiltrated popular culture the most. Quick word of advice to all Moldovan pop group managers. If you get a call from one of Mr. Brolsmaâ€™s people, never call him back. Ever. They owe that guy millions of dollars. Trillions. Basically every cent theyâ€™ve ever made since 2005 should go straight to Brolsma…..

First, a hypothetical. Letâ€™s say that Gary Brolsma were to appear in a rap video, dancing along side Ludicrous, or 50 Cent, or whoever the young people are listening to these days. Would the video automatically become cooler? Just think about that for a second. The fact that it doesnâ€™t automatically seem out of the question for a rapper to invite Brolsma to be in a video dancing with hot women with champagne on their breasts (and the fact that youâ€™re probably wondering in your head if Brolsma might actually have already been in such a video) is all the proof you need.

“Or,” I countered, “One person has seen Numa Numa seven hundred million times.”

We all logged onto the National Lampoon site the second it was posted (remember: proud parents, proud parents!). Then we saw the video. Then I realised: I have heard the Numa Numa song. About a million times. It’s the exact same song — with slightly altered lyrics — that played when I lived in Israel, climbing the mountain to Shimon bar Yochai’s grave in Meron, dancing with the Hasidic hippies in Crack Square, or just turning the corner into an unexpected party in the middle of nowhere.

It’s hard to explain exactly what this song signifies to me. A combination of religious ecstasy, triumphant dancing, and the cheap religious books that the caravans of Hasidic rave-boys sell across Israel (neon covers! kabbalistic wisdom! all yours for, what, the Israeli equivalent of $2.50?). Yes, there’s definitely a lot of drug use among a minority of Na-Nachers. And yes, it’s not a sustainable lifestyle — that is, jumping around to trance music and going village-to-village selling books all day. But for what it is, I think, more than anything, it’s really an expression of bittul, the idea of nullifying your own will before God’s. The idea that, even if you look like a total dork when you dance (and I do) (but who doesn’t, when you’re hopping up and down?), you’re fulfilling Rebbe Nachman‘s entreaty that “it’s a huge commandment to be happy.”

And — and this, I think, is the hidden mystical dimension of Jeremy’s column — who exemplifies this total self-nullification better than the Numa Numa kid? 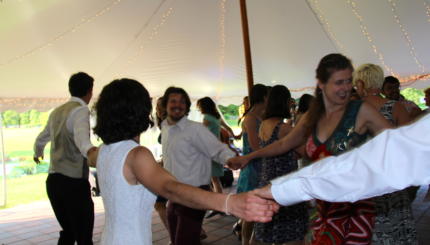