Here’s a conversation that I’ve had on numerous occasions in the past couple of weeks:

Me: OH MY GOD! Did you see Survivor last night?

Other Person: Last night? You mean, ten years ago?

Me: How could you have stopped watching this show!?!?! The battle between Russell and Boston Rob is epic. Like a modern day Saul vs. David.

Other Person: Who is Boston Rob?

Me: We are no longer friends. 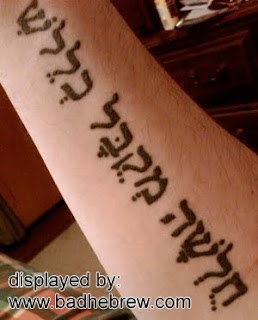 That’s right. I love Survivor. I’m not even going to tell you the reasons why. It’s so good that I don’t even need to explain why the show is so amazing. But this season especially, the show has been unbelievable. The reason? This year’s participants.

Because this season is “Heroes vs. Villains,” the producer have assembled some of the best characters from previous seasons, including people like Boston Robm, Colby, and Jerri. But my favorite might be one of the craziest people to ever appear on network television. That man is “Coach” Benjamin Wade.

Coach is, plain and simply, a crazy person. He doesn’t trust anyone on the show but is unwilling to lie. And when he does lie, he is just plain terrible. But what I like the most about him is his arm tattoo featuring Hebrew writing.

His arms reminds me a lot of the awesome website Bad Hebrew Tattoos. BHT, as I’ve just renamed it, features pictures of people who tried so hard to have Hebrew tattoos, but screwed up on the spelling, giving their tattoos totally different meanings. My favorite is the tattoo that accidentally explains the prohibition against having tattoos.

But back to Coach. I was wondering what the deal with his terrible tattoo was. Luckily, Coach is an egomaniac who can it explain his tattoo himself. Out of context, he’ll seem like a good guy. But believe me, the man is a villain.

The Revolution Will be Televised: Why I Celebrate Survivor

There are a lot of adjectives that I can use to describe my identity, some more obvious than others. It ...

After a hiatus of a couple of years, about two years ago, I started watching Survivor again. While many people ...

Kenny vs Spenny: Who is the Better Jew?

Have I mentioned before that I love television? Because I do (a lot). One of my favorite, if not my ...