I always look forward to the Passover seder. Any ritual organised around reading a book is good by me (those people who shout Bible verses in your face on the subway platform notwithstanding…although, if you catch them in a quiet mood and ask about their lives, you’ll get some pretty wild verbal autobiographies), especially when you’re with the people you love, or a bunch of strangers with interesting things to say, or some combination of the two, which is the way it played out this year.

We were de-invited from our first seder because our hosts’ kid developed mumps, which, since we’ve got an 8-months-pregnant woman and a toddler, is not an ideal situation. (Of course: we live in Crown Heights. Where else in the world is there an outbreak of

mumps in 2010?!) On the other hand: Being that we’re in Crown Heights, it’s totally natural and normal and not at all a breach of social etiquette to call some random folks and say, we need a seder, can we come over?

And that’s what we did — my friend (and awesome poet) Jake Marmer‘s in-laws were glad to take us in for the night. And the next night, we returned the favour — not to them, but to the aforementioned combination of friends and strangers, some of whom knew the seder inside, out, and backwards, and some of whom hadn’t been to a seder in years.

That’s one of the advantages of a seder. With the same text in front of you, the preeminent Torah scholars of the generation and the Child Who Does Not Know How to Ask a Question are on the same footing. The big question of the Haggadah isn’t “How is this night different?” — anyone can see how this night is different, and the Four Questions are really just statements that echo that. The real question is, why is this night different? And anyone is equally qualified to dig into the text and answer that.

When I was a kid, Passover eating was pretty simple. Most nights, we had regular meals with matzah replacing the bread: matzah burgers, matzah pizza, matzah lasagna. It’s totally doable, and even cool as a change-of-pace sort of thing. Desserts were plentiful: macaroons, coconut marshmallows, and jelly-filled whatevers. My grandmother made “matzah rolls” out of matzo meal and lots of eggs, and we could even have sandwiches. We were always okay with that, with the matzahfication of our food. Or at least we were for the first couple of days, until we got bored of matzah and our pee started smelling like burnt toast and we started counting down the days (ok, hours) until we could eat the B-word again. Life — for the 8 days of Passover, the day before (when you stop eating grains in mid-morning), and the month before (when you stock up desperately for food you can barely stand) — becomes centered around this frantic rush of fortifying our boundaries to Passover. Food substitutes and iPhone apps seem to be created for that very purpose, to help us ignore the un-ignorable: that we’re neck-deep in a leaven-less life.

This year, it seems to be the official position of MJL’s blog (well, of Tamar’s posts and my own) to advocate a different sort of simplicity: rather than doing a simple find-and-replace routine on your diet, where you replace any sort of grain with matzah, try eating simpler foods, unprocessed foods, and stuff that doesn’t come out of a package.

All of this is a long way of saying, there are as many ways to keep Passover (both food-wise and otherwise) as there are people who are keeping it. And one of those ways is to pretend that nothing’s wrong, that your diet is completely fine and that you just forgot to buy some bre — yeah. But why turn a potentially awesome transformation of your diet into a gnarly routine of substitution?

Everything you need to know to celebrate the holiday.

So I don’t know if you noticed, but we just finished up with Purim. So many kind strangers and people-from-my-synagogue-whose-names-I-sort-of-know-but-don’t-exactly ... 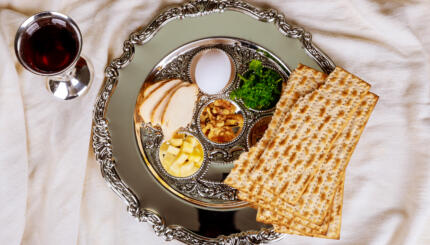