It started with a simple tweet. Little did I know that I would be spending my morning figuring out the details of a law on kashrut.
Yesterday, I went onto MJL’s Twitter account to tweet a cool fact about the permissability of eating quinoa on Passover: Because it is a new world crop, quinoa did not make the kitniyot list because medieval Ashkenazi rabbis didn’t know it existed.

Simple. Direct. I didn’t think much more of it. But then we quickly got a response that stumped me. If quinoa is acceptable on Passover, what about other new world crops? If medieval rabbis didn’t know about corn, why can’t we eat it on Passover?

I made a few phone calls, and even stumped some learned rabbis. Finally, I got in contact with Rabbi Yaakov Luban of the Kashrut department at the Orthodox Union. He led me to an article he wrote about kitniyot that discusses new world crops, including potatoes, peanuts, corn, and yes, quinoa. He writes:

One possible distinction is that corn exhibits many characteristics of kitniyot (it is threshed, winnowed and milled and used in bread, and it often grows near other grains)…The ambiguity about the distinction between peanuts and corn is responsible for the controversial status of quinoa. Another New World grain, quinoa has been a source of much halachic debate. Though quinoa was the staple grain of the Incas, it was almost eradicated by the European conquerors and was all but forgotten until it was reintroduced to the world in the 1970s. Clearly no minhag existed about quinoa.Â

So there you go. Now, I can’t eat corn bread. Feel free to ask any of your questions any time over Twitter. Now you know that we actually try to answer them. 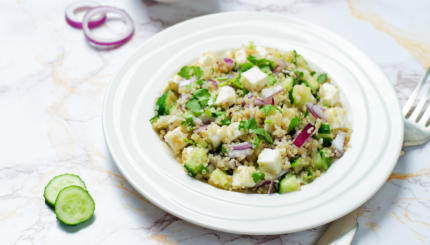