MyJewishLearning’s new versions of traditional Hanukkah songs have been getting noticed! Alicia Jo Rabins’ cover of “Sivivon Sov Sov Sov” was just hailed in the New York Times blogs as a “tender version of the ‘other’ dreidel song,” which, they rave, “should be a Hanukkah standard.”

But my favorite part of the article is the commentary by Alicia Jo herself. “The great thing is that even Hanukkah songs are in minor keys,â€ she says, â€œwhich makes it easy to cover them with a creepy twist.â€

Go listen to it yourself here.

Meanwhile, Mista Cookie Jar, whose cover of “Hanukkah O Hanukkah” has been blowing folks away, just released this video for his song “Aunt Carol”: 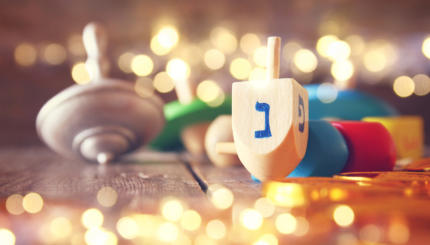 How to Write a Hanukkah Song

The rest of the world is still eons away from Hanukkah. If you’re super-prepared — like my mother, for instance ...

Jewish Music Lyrics: The Best of 2009

It’s not news that a Hasidic Jew can rule the charts or that Yiddish-revivalist klezmer-punk bands are capable of rocking ...