It was 10 p.m. on a Thursday night at the Isabella Freedman Jewish Retreat Center, and I was finally learning how to lay tefillin. I took in all the details with wonder: Seven times around the arm, the shape of a shin on the hand, kabbalistic meaningsâ€¦The only unusual thing was that these werenâ€™t tefillin that you wrap. These were tefillin that you roll…out of challah dough.

Tefillin wasn’t the first ritual Iâ€™d rolled in this fashion. Friends and I had already used challah dough to count the omer, sacrifice a bull, and tie tzitzit.

During my time as a baker in the retreat center kitchen I experimented with all sorts of themed challahs. First, I created a goddess challah for a womenâ€™s group. Then I fashioned a ladder reaching up to heaven for Rosh Hashanah, followed by a seven species challah for Sukkot (made with the seven species of the land of Israel: Wheat, barley, olive oil, pomegranate, dates, figs, and grapes).

Before I knew it, I was reading the weekly Torah portion with an eye toward what challah I’d make that week. Perhaps even more disturbing, I started to care more about how the challah looked than how it tasted.

Pictures of my parashah challah (like Adam sleeping in Bereshit above) will be added to the weekly Torah portion materials on MyJewishLearning each week of 5770. Each picture will be accompanied by a brief explanation of the challah, and the verse from the Torah it is based on. Check out the challah for Parashat Bereshit here. 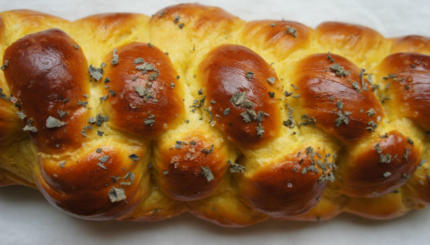