The new film “A Serious Man,” by Joel and Ethan Coen — long-rumored to be their most serious, their most autobiographical, and their most overtly Jewish project yet — opens with a brief scene set in a Yiddish-speaking shtetl, presumably a few hundred years ago. A husband tells his wife of his misfortunes on the way home: his wagon broke, and the only thing that saved him was the sudden appearance of a distinguished Torah scholar, who helped him fix it.

Upon hearing this, the wife looks at the husband in horror: the Torah scholar he named has been dead for three years. The husband returns her horror. The husband invited the scholar to visit them.

When the scholar shows up (a fabulous bearded-and-payosed Fyvush Finkel, the lawyer from Picket Fences, and the only one of the three who speaks Yiddish like he means it), the wife banishes him, claiming he’s a dybbuk, and — spoiler alert — stabs him in the chest. He doesn’t immediately start to bleed, and the wife nods in satisfaction. After a few minutes, though, bloodstains appear below his shirt. The Torah scholar shrugs, never actually answering the question of whether or not he’s mortal, and wanders out into the snow to die.

Judaism is the religion of questioning. In Christianity, the rules are pretty simple: Accept Jesus, and you’re saved. In Judaism, our rulebook is called the Talmud. It’s 3,000 pages long, it’s filled with complex debates that are all replies to relatively straightforward questions — and the most maddening part is, three quarters of the time, there are no direct answers. The Talmud is the worst kind of mystery: the kind that finishes with an open-ended conclusion.

Like the opening of A Serious Man, its finale, and most of what comes in between, is shrouded in questions. The tale itself is a curious pastiche of retro 1970s retro-Philip Roth storytelling and contemporary 1990s Michael Chabon-type storytelling. It’s sufficiently postmodern that it doesn’t feel the need to close up all (or, indeed, any) of the problems it poses, but it examines those problems with thoroughness, clearness, and utter convincing-ness.

The scene that introduces the latter era alternates between the middle-aged Jewish math professor Larry Gopnik being examined by a doctor and his son listening to Jefferson Airplane during Hebrew language lessons on a primitive Walkman.

Each gesture is so amplified — scenes of the son’s ear listening to music, his fingers drumming, the stethoscope being inserted into the father’s ear — so deliberate and so well-thought-out that each passing moment increases the tension with the skill and grace of a well-timed anxiety attack. Will the son’s Walkman be discovered? What will the father’s ear-test results be?

I might take back what I just wrote: it’s easy to compare the Coens’ well-timed meticulousness to Philip Roth. However, whereas Roth resents his neuroses on a fundamental level, envying the goyish concept of joie de vivre, the Coens embrace the notion, even fetishize it. Every manifestation of traditionally Jewish symptoms — from the new rabbi’s attempt to derive spirituality from the freshly-paved parking lot to the chief rabbi’s secretary’s arthritis-affected walk — seems to ooze the same kind of affection that I have for my oh-so-stereotypical Jewish cousins who always compare notes about their allergies: I wince when I hear them talk, but I love every minute of it.

When the main story begins, Gopnik has always been one step away from a total meltdown. His wife leaving him for Sy Adelman — a recently-widowed, Barry White-voiced, white-goateed man with a wardrobe and chilled out temperament that are both reminiscent of The Dude in Big Lebowski — might be the nut that cracks it.

Instead of questioning his wife’s decision or embarking on a midlife crisis of his own, Gopnik goes the existential route. He visits the synagogue’s three rabbis, inquiring of each whether he’s living a good life, doing right by God — whether he is, in fact, a mentsch.

I read somewhere that A Serious Man was going to be titled The Mentsch, and I don’t know if that’s true, but it does seem fitting. The film strikes a strange balance between the religiously-relaxed, uber-Zionist Midwest Judaism of its characters and the mystical, miraculous, otherworldly Judaism of its Kabbalistic source texts. When Gopnik meets with his synagogue’s older rabbi, he is told the story of the Goy’s Teeth — a somewhat epic story told by a member of the congregation, a dentist, who finds a prophetic Hebrew inscription embedded upon the rear of a gentile patient’s teeth — and, after a ten-minute retelling, Gopnik asks: “So what is that supposed to mean?”

Unsurprisingly, the rabbi has no answer. It’s a moment strongly reminiscent of the end of Rebbe Nachman of Bretslav’s fairy tale “The Story of the Seven Beggars”: after close to 100 pages of dead ends and false starts, the rebbe concludes with a dismissive ending: one way or another, the prince managed to rescue the princess. In this film, as in that story, the end — and whether in fact there is an end in the first place — is unimportant. The important part is the journey. 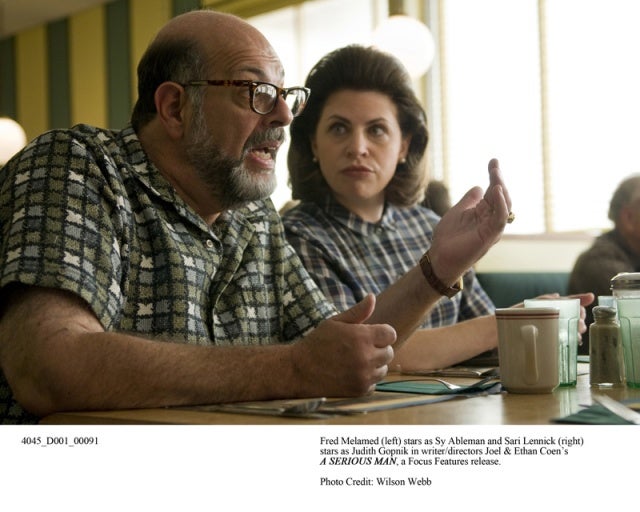 Like the best aggadah, the film sets up a problem, throws in a number of variables, and then poses the “Big Questions.” Although the cast is an ensemble, and there’s a number of subplots encircling the story — everything from the uncle’s Kabbalistic numerology experiments, which unexpectedly win gambling games, to the son’s continued attempts to smoke pot during his Bar Mitzvah lessons — at its heart is Gopnik’s question to his rabbis: Is he a good person? Is he a serious man? Is he, in a word, a mentsch?

It doesn’t answer them. That’s okay. The Coen Brothers are notorious for this type of storytelling, slice-of-life Americana of the most extreme sort: they start with a tangled situation, tangle it further into an intricate cobweb, and then end it. In any of their earlier deus ex machina films — Fargo, Barton Fink, even the (deservedly) deified-by-Jews The Big Lebowski — they never leave the audience feeling satisfied, but always seem to bundle our troubled feelings with an odd sense of closure, as though each improbable ending is the most natural result of whatever set of odd events made the film.

More than anyone else, the Coen brothers have mastered the art of telling a postmodern story and making it feel, more or less, like real life. That Yiddish-speaking husband and wife from the beginning? They never come back. The rabbi who might be a dybbuk? We never find out for sure. The goy’s teeth? They served their purpose, even though we still don’t know what the purpose was.

But the story remains, in all its puzzling detail. The characters are just as frustrating and incomprehensible and gloriously, fallibly human. And that’s as much of a conclusion as we’re going to get.

He could kill a lion or topple a temple with his bare hands, but succumbed to the love of a treacherous woman: many wild traditions circulated about the first Jewish superhero.