Where Do You Get Your Ideas From?

My new novel, Day after Night, is based on the true story of the October 1945 rescue of more than 200 prisoners from the Atlit internment camp, a prison for â€œillegalâ€ immigrants run by the British military near the Mediterranean coast

south of Haifa. The story is told through the eyes of four young women at the camp who survived the Holocaust with profoundly different stories: Shayndel, a Polish Zionist; Leonie, a Parisian beauty; Tedi, a hidden Dutch Jew; and Sorah, a concentration camp survivor. Haunted by the past, the four of them find salvation in the bonds of friendship and shared experience even as they confront the challenge of recreating themselves in a strange new country.

I love the cover. I canâ€™t say that about all the books that bear my name, but I think this one is perfect.

The photograph was found by the persistent, patient, and talented art director Rex Bonomelli at Scribner. Because there are four main protagonists in the book, the search focused on an image of four girls. Some lovely shots were proffered, but because the four main characters â€“ Tedi, Leonie, Zorah, and Shayndel â€“ are described so fully in the novel, the pictures all seemed wrong for one reason or another: clothes, hair color, setting. Many emails were exchanged; many pictures were rejected. 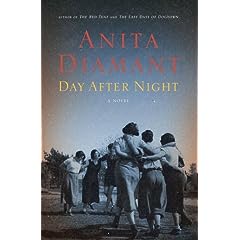 This image arrived via email under the subject line â€œI think this is it.â€ Everyone agreed.

The photo comes from the archive of Herbert and Leni Sonnenfeld, who were well known in Israel as photographers of Jewish settlers in Palestine in the mid-1940s. Indeed, the Sonnenfelds are said to have helped shape the image -â€“ and self-image -â€“ of the state.

The picture was not taken in Palestine at all; it comes from Germany in 1935 and the Ruednitz youth aliyah (Aliyat Hanoar) camp. This pre-immigration training center allowed young people to test their ability to live collectively and try out the demanding agricultural work of kibbutz life in the land of Israel.

Herbert Sonnenfeld (1906-1972) was a Berlin-born photojournalist who, with his wife, Leni (1907-2004) chronicled Jewish life in Germany until they fled the Nazis in 1939. At that point, they tried to immigrate to Palestine, then under British Mandatory rule, but were denied entry. Instead, they settled in the United States and traveled widely, photographing Jewish communities in Iran, Morocco, Spain, and ultimately Israel.

The image on the book cover haunts me. They look so joyful in their dance, in their shorts. There is no record, however, of their names. Did some of these kids make it to Israel? Did any of them?

Admittedly, 770 Eastern Parkway, the biggest synagogue in Crown Heights and the headquarters of the Chabad-Lubavitch branch of Hasidic Judaism, ...

Everything You Heard Is True

Like a lot of Jews my age, I sometimes have a hard time conceptualizing the Holocaust. I’ve heard tons of ...