I was asked by RedRoom, a website for writers, to blog about the problems of publicity when my first book came out. I had a publicist through my publisher, but they’re notoriously overworked, and they didn’t even read my book to start out with. So, because I am Jewish, my publicist ended up being my mother. Here’s how it went.

When my first book came out, I turned into a bit of a diva. 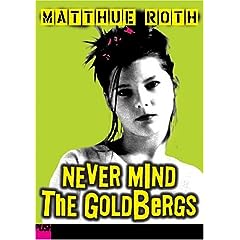 I didn’t expect it to happen. I totally wasn’t diva material. It was like becoming a werewolf: one second you forgot to shave, the next you’re outside, naked, howling at the moon. For me, it was more like howling at everyone who picked up their phones. My editor, my publisher, the company publicist (who was working with about 50 books that came out the same month as mine, each with their own totally press-release-worthy story that was at least as good as mine) and the agent I’d just signed onto who had nothing to do with my first book, but who seemed eager to establish a good relationship with me, and was game to listen to just about any story or rant I cared to fire at him — no one was spared my wrath. Instead of telling people why Never Mind the Goldbergs was the book they needed to read, I kept telling people how no one was ever going to hear about Never Mind the
Goldbergs.

It was my editor, David Levithan, who finally slapped me to my senses. He’s kind of the opposite of me — I’ve been self-publishing zines and chapbooks since I was twelve. He was writing for major publishers (the Baby-Sitters’ Club, no less) at 18. I was punk rock. He listened to teen pop. I was a firm believer in the indie, underground aesthetic; his first book, a personal journal from the viewpoint of Darth Maul, had been printed and publicized by no less than Lucasfilm.

“Matthue, you’ve grown up doing things by yourself, and you’ve never wanted anyone else to put words into your mouth,” he said. (That last part might have been a special dig at the chapter that he wanted to delete and I over-my-dead-body’d him about until he gave in.) “You have friends, good friends, who are willing to die for you. Why not ask them to help? Why not do a little bit yourself?”

So I did. While Scholastic would only buy two ads for my book (one of them in a magazine for middle-aged Jewish women, while the target demographic for my book was 17-21-year-olds — see if you can guess which one), I could write letters. I started telling everyone I knew who had anything to do with the publishing world, or anyone I knew who knew anyone themselves, that my first book was out and that I needed to do something about it. I came this close to a story in the Washington Post, which was my story of the one that got away for the whole next year. More important were the dozens of people who wrote about my book on their blogs and Facebook pages, saying how much they enjoyed it or how it sounded cool. Those dozens of people spread the word to dozens more. It grew exponentially.

Probably most successful of all, my parents threw a party for all their friends, with homemade lemonade and cookies, and had me read from and sign my book. Not only did they buy copies, many of them bought multiple copies. “For Hanukah,” one of them said, even though it was April.

It wasn’t a bestseller, but it was my best seller. “Cult novel” makes Goldbergs sound either kooky or B-level, but that’s exactly what it was — a bunch of people from disparate backgrounds who felt really passionately about my book.

That’s about all I can say about it. The rest, everyone else said for me. And that’s the kind of publicity that no publisher can buy.