The cover of The Baal Teshuva Survival Guide, a handbook to making it as a newly-minted Orthodox Jew, depicts a life preserver being tossed over a body of water. 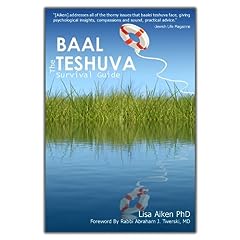 Get it? It’s a really clever way of showing what’s inside the book. You, the reader, are the baal teshuva — the person who’s drowning in the ocean of Orthodox Judaism. This book is your life preserver. If you read the book, it will help you float.

It’s true that Orthodox Judaism has a lot in common with a large body of water. It’s huge, it’s inhabited by a zillion organisms of every conceivable size and shape and opinion, and there are very few road maps. And, like a really smart and accomplished oceanographer, The Baal Teshuva Survival Guide contains a lot of information. Choosing a rabbi, fitting in with a community of Orthodox people who are notoriously secluded and sometimes unwelcoming, how to absorb entire new arenas of Jewish law that you never knew existed.

The thing is — the water on the cover doesn’t have any splashes.

If someone throws you a life preserver, chances are you’re drowning. If the water is calm, sedate, unmoving — well, either you’re floating peacefully, or you’re already dead.

The Baal Teshuva Survival Guide is actually an excellent book. It’s informative, well-organized, and packed full of useful facts and stories — and it is packed full, with more than 400 pages of articles. Most of them are shorter than a page or two, and easily digestible. Lisa Aiken, Ph.D., both a clinical psychologist and accomplished author, takes on both the recent phenomenon of the baal teshuva explosion, as well as the idea itself of being a returnee to the faith.

The problem is, the stories in the Guide are more anecdotal and less in the how-to vein. It’s not a guide to becoming a baal teshuva at all — it’s a guide for, once you’ve already taken on all the burdens and onuses of Orthodox Judaism, settling into your new lifestyle. More passionate than dogmatic, the book pursues the why and the who and the where much more actively than the how. While the title of this book might lead someone to purchase it to learn about becoming more observant, and guiding them through a difficult, intense and life-changing process, step by step, this feels like it’s written to inspire people to tug a friend’s sleeve and say, “Hey — this sounds so much like me!”

As an anthropological study, though, Aiken’s study is excellent. It’s both grand in scope and thorough. Non-observant spouses, dating and marriage, and even the phenomenon of “Too Much, Too Fast” — in which newly Orthodox devotees overdose on Judaism, and then fry out — are covered in remarkable detail, and written from the point of view of someone who clearly knows what she’s talking about.

And, though the book clearly has an agenda (duh, it’s written by Orthodox Jews) it presents the motivations, feelings, and life situations of typical and non-typical baalei teshuva in explanations that are both clear and encyclopedic.

The guide even deals with issues, the ones we all know are there, in a clean and well-intentioned way. Take its section on depression, for instance. Anyone who’s ever spent time in a synagogue with more than one baal teshuva knows that there are a lot of people who are attracted to religion because they’re depressed.

In our synagogue, the common reaction had always been to stay far away from those people until either (A) they made their kitchen kosher, invited us all over for a meal, and their food is really really good, or (B) they flipped out and never come back to the synagogue again.

This book, fortunately, takes a perspective that’s at once refreshing and non-judgmental. In a section called “Pre-Teshuva Depression,” Aiken addresses the idea that being religious will solve all a person’s problems — it won’t, of course, she says. “A person who believes that keeping Torah is the right thing to do may give up familiar sources of happiness and pleasure without having replacements,” Aiken writes. “They stop going to discos, parties, to the beach, and hanging out with the opposite sex. They stop wearing sexy clothes, going to the health club (not that there is anything wrong with exercising, they just tend not to make time for it).”

All told, Aiken has an exemplary understanding of the baal teshuva lifestyle — its stigmas, its problems, and its strengths. The information that’s presented here is superb.

The only issue is, the way it’s presented isn’t really a guide to anything. Maybe the problem is ours. We’re so used to “Judaism for Dummies”-type books that we want all the answers to be quick ones — even answers to Big Theological Questions like God’s existence. Jewish organizations like Aish HaTorah and ArtScroll have made things as complicated as expressing the inalienable concept of Oneness of the Lord as simple as a colored chart and an easy-to-follow prayer script.

Last weekend’s Jewish Week contained an op-ed by Sherri Mandell that seemed to want to make a point about “Orthodox-bashing” ...

As one of the founders of the Jewish Renewal movement, Rabbi Zalman Schachter-Shalomi has labored his whole life to make ...

In the Forward this week, Abbott Katz begins his plea for new Jewish nomenclature with: “Stop calling me an ultra-Orthodox ...