Interview with Daniel Levin, author of The Last Ember 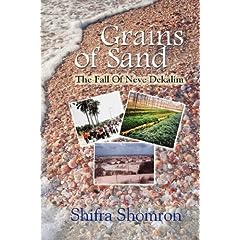 Shifra Shomron’s novel Grains of Sand: The Fall of Neve Dekalim tells the story of Efrat, a teenage girl living in Neve Dekalim, one of the Jewish settlements of Gush Katif. The residents of this community in Gaza were forced to evacuate their homes and communities in August 2005 as part of Israel’s disengagement plan.

The disengagement from Gaza was a politically and socially complicated issue. Many families left voluntarily before the announced date of disengagement, but some stayed and were forcibly removed from their homes. Shomron’s novel is told by a resident of Gush Katif whose family chose not to leave voluntarily.

The book starts by introducing normal family life in the neighborhood. Efrat describes her parents, brother, dog, school and her attachment to Neve Dekalim. We follow Efrat’s life through the intifadas and into the disengagement. We hear Efrat’s emotions and the feelings of her family and neighbors in regards to their removal from their homes.

Shomron, who was in 12th grade when she started writing the novel, utilizes narrative, poetry, journal entries, news articles, photos, and Biblical text to give the reader a full picture of her experiences. As the first English novel about the disengagement geared towards young adult readers, Shomron wrote her story in order to encourage dialogue and discussion and make sure readers knew what the disengagement was like for the residents who were forced to leave their homes.

How much of this story is true to your life?

Though my book is personal, it isn’t an autobiography. Most of the events actually happened–if not to me then to people I know–and much of the dialogue is true. My book is indeed personal but it isn’t only my story. My story is the story of thousands of Jews who lived in Gush Katif.

Many people who have met me after reading Grains Of Sand have approached me and said, “Shifra you’re Efrat, right?” And the answer is not quite “yes,” and yet, it’s not “no.” The character Efrat does reflect me to a certain degree. On the other hand, things happened to her that did not happen to me. Her reactions are not all the same as my reactions were at the time and so, while she is similar to me, she is not a mirror image.

There has been a lot of controversy as to whether your book is worthy of inclusion in the Israeli literature curriculum for the D and F English Literature matriculation exam modules. Many argue that it is too political to be considered appropriate literature for the classroom. Others say that it is inappropriate to present a one-sided position. Still others refute that the novel represents an important aspect of recent Israeli history and relevant to all. Do you think this debate is due to a bias and why should your novel be a part of the curriculum for the exam?

I’m concerned that there is bias against my book. If it hadn’t been for the Jerusalem Post article by Abe Selig, which highlighted the corruption of one of the committee members in regards to my book and forced them to reconsider including the book, my novel wouldn’t even have passed on to the committee as required in their rules.

Since Grains of Sand meets all the needed requirements, was proposed by teachers to be put on the curriculum, and represents a side of the story which many people didn’t hear, I believe it should have a place on the list of recommended reading materials in the Israeli Literature curriculum. I wrote my book as a teenager, and I think my example can serve as encouragement to other teens to write and empower themselves through the written word. Also, there is much in my novel that could help spark classroom discussions.

In Israel, English is a required subject and taught as a foreign language [EFL] and the language in my book is readable with words that are not complicated. Because my book is written in English, it helps put some distance in a familiar event students might feel very strongly about. Grains of Sand addresses material that affected everyone in Israel regardless of political, cultural, religious affiliation and this makes the reading more interesting and able to relate to. My book provides a bridge of understanding towards the diversity and division within Israeli society. Also, as time passes some students will be too young to understand the historical events which unfolded around them, and this is part of our national history.

First, I’d like to point out that many youth from Gush Katif felt betrayed following the expulsion. They found it very difficult and traumatic after their own army, where their father, brothers, relatives and friends had served, had come and expelled them from their homes. Today, four years after the horrible withdrawal, most have joined the Israel Defense Forces and don’t feel so estranged that they do not want to participate in the Israeli army–which is the melting pot of Israeli society. I volunteered in National Service, which is what many religious girls do in Israel instead of going into the Israeli Defense Forces.

I’m quite critical regarding the government. They managed to expel us and destroy our homes in an exceedingly swift and efficient military operation. But now, four years later, we are still in temporary caravillas and our future permanent communities are vague castles in the air. We have high unemployment, health problems on the rise, and little hope for the future–all in direct relation to the unilateral withdrawal/disengagement.

My identity with the State of Israel is not because of the leaders but rather, in spite of them! As a daughter of the Jewish nation, this is my land. This is my heritage. I love my country and my people–and do my best to make this a better place by participating in national elections, writing articles, publishing my novel, and studying to become an English and Bible study teacher.

Where are you living now? How has your family life changed after the disengagement?

I live with my family at the Nitzan caravilla site (pictured) which is the largest encampment of the Gush Katif expellees. The walls are plaster with a thin sheet of metal inside. The caravillas are set very close to each other, and there is little privacy inside the caravilla or between them.

How hasn’t my life changed after disengagement? I’ve gotten tired of always searching for words. Therefore when I found a wonderful quote of Yoni Netanyahu (written to a friend in his first letter from the US after leaving Israel with his family while yet in high school) I memorized it:

“Longing is difficult to describe. I always used to laugh at the word; I always thought that you could forget, but I was wrong; believe me you can’t. To adopt oneself to a new life–yes, that’s possible; but to forget the old- that’s impossible. And I want to return, return, returnâ€¦the word keeps floating up to the surfaceâ€¦ without purpose, without hopeâ€¦ yet always gnawing, stabbing, hurting.” (From the Letters of Jonathan Netanyahu).

Joshua Henkin’s new novel Matrimony hits bookstores today. You can read a description of the book here and order it ...

Only a few years ago, Idan Raichel was just some dreadlocked guy in a Tel Aviv basement, composing music on ...

Alan Kaufman has gone through a lot of cocoons. A beat poet who went big with his hugely-successful anthology The ...