He doesn’t hold seances or visit graveyards — not literal graveyards, anyway. Instead, he takes revisits key moments in Jewish history from the Torah and Tanakh, and breathes new life into them. He does this mainly by becoming them. In “The Silence,” he is Isaac, bound up by his father, being brought up to Mount Moriah to be sacrificed. “It’s Going Down” finds Bar as Rahav, the holy prostitute, spitting rhymes about the strange Children of Israel who’ve just stumbled into town…and he even makes a play at being the holiest one of all, God, in “Know My Name.”

Bar’s Bible Raps project is designed to marry Torah with a present-day pop sensibility. (The chorus of the song “My Brother’s Keeper,” which testifies, “I’m all about my brothers, I’m all about my people,” is a good representation of this.) For the past year, Bar has been touring almost nonstop in support of the project, mostly to Hebrew schools and summer camps, and speaking to crowds that are sometimes as unaccustomed to hip-hop as they are to the Bible — mixed secular and religious crowds of young children, teenagers, and parents. “It seems like it’s not Jewish…it’s really, really
good,” a ten-year-old girl says on Bar’s promo video…and, though she probably doesn’t intend it as a critique of Jewish education, its validity stands.

With this month’s release of the Bible Raps album on CD and iTunes, Matt Bar prepares to take his music and his message to a wider audience, even as he prepares to set out on tour again. The project also includes a seriously mind-blowing teacher’s guide, where Bar and his collaborators create Talmud-style annotations to the lyrics, explaining them while linking to related verses, stories, and offering insights into both the Bible and the song.

On Bible Raps, you take a bunch of Biblical personalities and write songs in their voices. Some of the events — like Isaac, on the way to be sacrificed — are somewhat obvious choices. It’s less so when you rhyme in the voice of Rahav, the kindly prostitute who helps Joshua and the spies when the Children of Israel arrive in Canaan, or when you’re talking about Haman…

Some choices are made based on a class given by one my teachers who really injects life into a chapter or character of Tanakh. Then all I have to do is regurgitate that class in rhyme with a few poetic flourishes. Haman, What’s With the Attitude was done at the request of my buddy (and fellow PresenTense Fellow) Adam Soclof. He wanted to do a video for Purim, so he asked me to write a rap about it. Next thing I knew I was dressing up as a buxom bombshell with a golden afro for a video that would be seen by over 50,000 people on YouTube. I had no idea what I was getting into!

What motivated you to write about Rahav?

Rahav was brought to life by a great teacher named Michael Hattin at the Pardes Institute of Jewish Studies where I’m a fellow. His lesson was the springboard for the Rahav rap.

Rahav is a fascinating character. The rabbis have her marry Joshua, so they obviously see her as substantial lady. She is considered by our tradition the first righteous convert — the only other person besides Abraham, up to that point, to figure out ethical monotheism totally on her own. So she’s a genius philosopher/theologian.

But also, the rabbis say she is one of the four most beautiful women in the history of mankind (they also have a few more crude things to say). What a woman! I had to write about her. I was also Rahav for Purim in Jerusalem and at midnight I freestyled for about 10 minutes looking deeply into her eyes in a mirror. Someone recorded it and put it on the album.

You’ve made a point of trying to write lyrics that are both explicitly Jewish and explicitly real. What’s your process like?

I learn either from a teacher or just reading this stuff myself. What I’ve learned at Pardes is invaluable. For some raps I do extensive research, check the Midrash and some commentators. Others, I just read the story and go at it.

As a Jewish educator, I am cognizant of each song’s pedagogic importance, and as a rapper and I am conscious of the rap’s illness. I am the clown that dances on the tightrope tied by the tension of those two metrics.

What was it like taking the material on tour?

We had a blast. I went with Ori Salzberg, my musical partner, who I met as a PresenTense fellow two years ago. We played day schools, Hebrew schools, Hillels, and a few conventions. Ori plays guitar and beatboxes, and I rap and beatbox and bust out my mouth trumpet from time to time. We hand out the lyric sheets that show where the raps are drawing their lines from Tanakh.

Ori and I are really trying to make our shows not only fun and “Jewish” but meaningful. Before each song we bust a little Torah about the song, and then we use the lyrics as a platform for discussions about Jewish identity and Jewish issues. We also do a workshop where the participants study some text then write and perform their own Torah raps. It’s golden. We have hundreds of students rapping in conversation with the texts, asserting their voices into the tradition.

What about kids who don’t like hip-hop — how do they react? Have you ever experienced a negative reaction from someone who’s like “that’s gangster music” or something?

Most kids like hip-hop. 70% of the Billboard #1 songs last year were rap or had rap in them. Hip-hop is the language of the youth — which is one reason why it’s an ideal tool.

There are many other reasons — for example, you can use a whole lot more words in one song than other genres. That allows you to cover more terrain. Also, as people might know and dislike about rap, it deals with mature subjects. Lil Wayne, the #1 rapper right now, is crude, violent, misogynistic and nihilistic, but he’s also is a genius in his use of language. As a consequence of that, kids’ ears can apprehend more mature and sophisticated subjects in rap better than the other genres.

For the kids that don’t, perhaps they’ll like the poetry or Ori’s guitaring, beat-boxing and pretty face or the creative approach to Torah. We’re very “unplugged.” Live, it’s an acoustic show and my flow is often melodic. Sometimes we do Rahav really sing-songy and, for better for worse, we sound like the Indigo Girls.

For people who have negative connotations about rap, they usually come around when they see what we are doing with rap. It’s also an opportunity to change some people’s misconceptions about hip-hop. I look at Rap as some look at a haiku or iambic pentameter — it’s a mode of organizing language that, if done well, can turn sentences into spells. Hip-hop is a huge tent, and you got 2 Live Crew in one corner and Barack “brush your shoulders off” Obama in the other. Yeah, I said it: without hip-hop Barack Obama would not be president. Same tent though.

A while ago, you were talking about writing a song for every parasha in the Torah. Are you still pressing on with that? What else do you have planned?

Next is another batch of songs that can make the Bible Raps Toolkit fairly comprehensive for Hebrew schools. At the end of the day we want to make Torah exciting and relevant to many, including those who wouldn’t get into the core texts otherwise.

Tanakh is important to each denomination. By making it exciting and hopefully without compromising the tradition we look to facilitate cross-denominational interactions and learning. Also, Ori made aliyah seven years ago, and I currently live in Jerusalem and we hope to bring a bit of Jerusalem Judaism to the States.

Our dynamic sums it up nicely: Ori is from Monsey New York, raised Orthodox, and I am from Iowa City, IA, raised barely-bar-mitzvahed. But we kick it. We get on tremendously and our difference perspectives make for more interesting conversations. 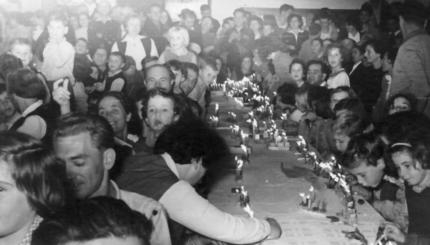 Modern Hebrew culture made of Hanukkah a celebration of the new, self-reliant Jew.

The genius physicist's Jewish activism, while less famous than his theory of relativity, was significant.