In a few weeks, a new siddur is hitting the market with a translation and commentary by Rabbi Dr. Jonathan Sacks, the chief rabbi of the United Kingdom. The publication itself is noticeable if only because a siddur is something that’s used so often by so many people, and comparatively few of them exist — but, more to the point, the Koren Sacks siddur is attempting to do the impossible: to challenge ArtScroll’s near-monopoly on the market. I’m getting one of these in the mail, and I’ve haven’t been this excited to get a book since the board-book version of In the Night Kitchen came out when I was two.

The siddur is being published by Koren, whose biggest entry into the US market to date is that neon-pink-striped Jerusalem Bible. It’s more widely known in Israel and Sephardic communities for printing a Shabbat prayerbook together with an ultra-thin Chumash, which provided the most luxurious experience my hand has ever had on a Saturday morning. You don’t even have to go jumping into the mid-service melee before the Torah reading, because, boom! — you’ve already got a Torah in your back pocket. Needless to say, my hopes for this siddur are high.

This JTA article does a good job of subtly making the point about ArtScroll’s domination of the market. For a number of reasons — everything from the clarity of its typeface and the helpful addition of gray-shaded boxes to separate special additions to the text — to the fact that, sadly, there isn’t much competition out there. But ArtScroll has come under fire for a number of offenses. Some of those offenses are textual. For instance, the ArtScroll Siddur translates the Song of Songs allegorically, translating “breasts” (to pull an example at random) as “the Twin Tablets of the Law.” Its “Women’s Siddur” has been widely criticized by both Orthodox and secular women’s groups for asserting itself as a feminist prayerbook while simultaneously printing disclaimers before Kaddish that advise that it’s inappropriate for a woman to say kaddish.

Despite all this, ArtScroll is still the preeminent prayerbook used in Jewish congregations — both in Orthodox synagogues and in many Conservative and Reform shuls as well. The Orthodox Union — which, in the past, has voiced its displeasure with the absence of the Prayer for the State of Israel in ArtScroll siddurim — is on board as a sponsor of the new siddur. And Koren has pages on its own website that go on and on talking about things like paper weight and typeface choice, which makes book nerds like me go all shivery in anticipation. Even among the greater, non-nerdy Jewish community, there’s a considerable amount of hype.

Is the new siddur worth it? Stay tuned — in the next couple days, I’ll be taking it through the motions, everything from morning Shacharit to the Bedtime Shema. Will it get the best of me? Or will I wind up loving every dot and dagesh? Stick with us for the answers. 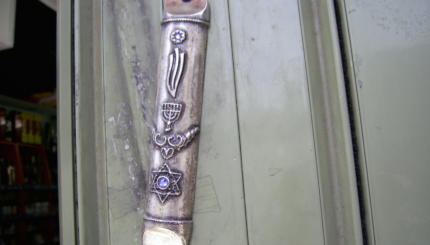 The two pillars of Jewish life.