Writing about Russians is a difficult business. The world of Russian literary fiction has a distinguished heritage that exists almost in its own separate universe, joined to the rest of the fiction world in the same way that Star Trek aliens look like humans: they may look the same, but the eyebrows are a bit off, the ears too pointy, and they bleed green blood. Writing my novel Losers, about Russian Jewish immigrant geeks, felt less like a process of writing than a process of translation: of taking ideas that were universal, and filtering them through an outlook and a set of experiences that are very definitely not.

Her debut collection of short stories, One More Year, lives in the tenuous border between the two. These stories are about immigrants, about being displaced, thinking in a foreign language, and just plain being weirded out by the world around you. Her protagonists are fiercely private and eminently relatable: “Companion” (read it) conflates the experience of being an alien with being a single woman. “The Alternate” tells the strange and awkward relationship that follows an immigrant meeting the daughter of the woman he used to be in love with in Russia. “The Repatriates” (read it) is about a couple trapped between Russia and America by business and indecisiveness.

I once read in the letters column to a science fiction magazine, a postscript: “Sorry for the long letter, but I didn’t have the time to write a short one.” The stories in One More Year, exemplifies that quality: the thought, craft, and sustained intensity of single moments that build together to form a searing, breathless, and sometimes scathing narrative. Stories like these are mini-novels, leaps of character and faith that, even in their brevity, travel the distance between entire worlds. Here, Krasikov talks about her tiny worlds, painting, and writing characters in a language that neither she nor they grew up speaking. 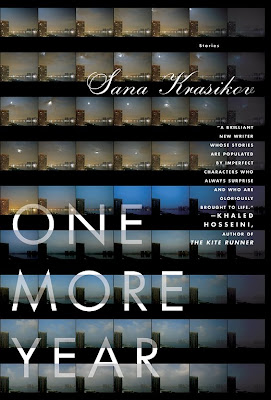 Did you start writing the stories in One More Year as individual stories, or as a collection? When did the idea of a book start to materialize?

As individual stories. Each one had a unique origin. I didn’t start thinking about it as a collection until there were about five or six, and a few I didn’t include.

There’s overwhelming feeling among your characters, I think, of weariness — the weariness of having too much wisdom, or too many experiences, or of too many shady guys. A lot of stories are about people discovering new things — whereas your protagonists feel almost as though they’ve discovered too much. Am I totally off? Or do you think that represents something deeper?

I do think that sometimes when we go through intense experiences, some of the fundamentals of our character, and many of our assumptions about the world, can get shaken. It’s not that we go through life just collecting experiences, it’s more that we get modified by them. And sometimes we have to rebuild ourselves from the bottom up afterwards, even though we may appear to be the same on the outside. I’m not sure if the characters in the stories feel that way, but I do.

How old were you when you arrived in the States? How has your relationship with the country changed since you first arrived?

I was eight. I always thought of myself as pretty solidly American. I think I came face to face with my foreigness after the book came out. When I attended my sister’s book group, some of the American-born women in the group thought a few of the stories ended sadly, and the Russians didn’t. They just thought they were realistic. In fact, they saw all my endings as happy endings. So I guess that answers your question.

These stories have such an intimate, lived-in feel to them — you tell as much with the omission of certain details as with the inclusion of others. Do you borrow from your friends’ or other people’s lives? Have you ever been called out on it?

Fiction always borrows from life. If it didn’t, what would be the point? The moment you put it down on paper though, it becomes fiction. It’s like Cezanne’s apple – he painted an apple people called “abstract,” but all he was saying to the art world was that the most realistically painted apple could still never capture the rich reality of an apple. Even when you were dabbing white dots to signify the pores of a fruit’s skin, you’re still abstracting, magnifying, embellishing. You can never actually record the world as it is; instead, you’re always re-creating it in your own image.

In “The Repatriates,” one character speaks of the lack of spirituality in America. I’ve always thought of Russia as a country of philosophical people, not particularly of spiritual ones — but I barely know anything. What did he mean by that? How would you describe Russian spirituality, if that isn’t putting you on the spot too much?

The word “spirituality” was in italics, which wasn’t too subtle of a way to say that Russians love throwing that word around. It’s sort of the catchall phrase to suggest that American society is shallow, which is a rather uncharitable assessment. It’s a word a lot of disenchanted immigrants use, so when I used it, I meant it ironically.

And, separately, do you have any nostalgia for Georgian life? What are your strongest memories of it?

I don’t really have nostalgia for very much. Georgian culture is unique. Georgians are a complex, passionate people and have an almost Mediterranean sensibility about life, art, and pleasure that is very different from the Russian sensibility. I have wonderful memories from Georgia, but then most people have wonderful memories of their childhoods.

What do you hope your stories do to people?

I hope they resonate with people’s own life experiences. I wouldn’t want my stories to be approached with any particular intellectual or aesthetic agenda. I think if you enjoy reading about real, flawed human beings, these are the types of stories that will appeal.

How’s your new novel going? Are you allowed to say anything about it yet?

I axed a lot of what I thought I was going to write. I’m sort of teaching myself the process form the inside out. It feels a little like re-inventing the wheel.

My new short story “Hailing Frequency” was just published (and you can hear or read the whole thing online). It’s ...

I recently had the opportunity to interview poet and educator Merle Feld, author of A Spiritual Life: Exploring the Heart ...

A Fictional Model of the Former USSR

Maxim D. Shrayer: Papa, let’s start with a basic question. What are the stories gathered in  Dinner with Stalin  about?David Shrayer-Petrov: Above ...