Someone driving through our part of Brooklyn honked at Itta and I, waving us over from the sidewalk. “What’s going on?” she said. “Is this a bank robbery, or is it some kind of Jewish holiday?”

It was a fair question, considering we were standing next to a seven-foot-tall person in all black clothes and a Mexican wrestler mask. This was my first Purim in a Hasidic neighborhood, and it was literally swarming with people: pre-tween geishas hammered on our neighbor’s door. A woman in full turquoise burqa walked down the street next to a man in a streimel and those tight white stockings. People ran everywhere, literally throwing candy at each other at times, and squeezing chocolate bars into people’s mail slots at others. “This is like Halloween, but the way Jews celebrate it,” Itta pointed out. “By giving people candy instead of demanding it.”

I’ve always been a Halloween-positive boy myself, but yesterday, I had to agree: it was pretty much a madhouse of goodwill and thanksgiving. We made thirty-two of our shalach manot packages, and by the day’s end we were down to three. (Frum Satire and his friend, paying us a surprise visit, knocked it down to one.) All told, ’twas better to give than to receive, and it was a mad amount of fun as well.

But, because it’s not bad to receive as well, here are my shalach manot highlights of the year:

* A family friend’s house had do-it-yourself shalach manot — there were a row of boxes, both new things and (packaged) food traded in from other shalach manots earlier that day. “So you guys would like, what, nice chocolate?” she asked, ready to drop in a big old bar that was imported and Swiss. “No way,” I said. It’s true — we’re not chocolate people. “Your wife wouldn’t like that?” she said. “What should I give her…” she rumbled through the box, pulling out a tin and making a face — “sardines?” “Actually,” I said, “she loves sardines.” (Don’t worry — they also gave us two pineapples.)

* Berwin, the aforementioned Mexican wrestler, handed us a bodega-bag with a really nice bottle of wine and a three-pound box of granola. I don’t understand it, either.

* Matisyahu and his family gave out falafel, hummus, and vegetables in reusable enviro-plastic containers, along with a plea to keep the Purim-related waste to a minimum — which was both good advice, and necessary.

This year was definitely my best Purim ever. I had two different costumes, I heard megillah at night and during ... 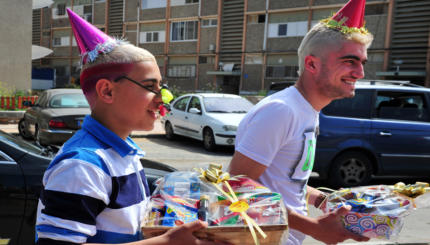 Why Do Jews Send Mishloach Manot on Purim?

It is customary to send Purim gifts to friends and strangers.