Literature and the Arts

Not to get too self-promulgating, but if you’re in New York, show up at the New York Public Library, Jefferson Market Branch in the West Village tonight — I’ll be reading from my new novel Losers, and a host of other people will be appearing, including Coe Booth, whose book Tyrell the New York Times couldn’t get enough of, and David Levithan, who wrote this little movie about two kids and an infinite playlist. 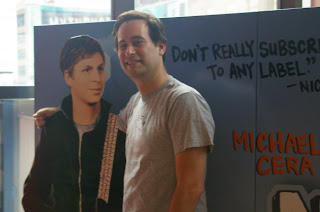 It probably isn’t the first movie ever to give the definition of tikkun olam, but it is the first to do it at an emotional high point that’s riveting and gushing and that makes you feel like you just fell in love. Or, at least, got a maddening crush that fills your skull and flushes out every other thought.

NORAH (letting down her guard): One of the best things about Judaism is called tikkun olam. Itâ€™s the idea that the world has been broken in pieces, and itâ€™s up to us to gather them and put them back together.

Anyway — there you go. Kabbalah, Hassidus, and movie stars. And me. The action starts at 6:00….

Micol Ostow, author of So Punk Rock (And Other Ways to Disappoint Your Mother), is guest-blogging all week with MyJewishLearning ...

Why Can’t Jews Fight Crime Too?

So, a couple of months ago Iâ€™m visiting my parents for the High Holidays and Iâ€™m watching Letterman, and Dave ...

I wrote the following article about Woody Allen’s The Insanity Defense for my Jerusalem Post books column, but it turned ...