Back in 2000, the Baha Men came out with their hit single, Who Let the Dogs Out. Man, that song was catchy.

Being the (un)trendy teenager that I was, I was happy to find out that I had a new catchphrase.Â  I didn’t really know the right context for it, but i knew it had to enter my vocabulary nonetheless.

Then one day at shul, I was talking to an old man at shul who asked me who actually did let the dogs out.Â  The song was ruined for me forever.

Old people ruin jokes and pop culture for everyone.

When I saw one of my favorite comedians, Sarah Silverman come out with her hilarious pro-Obama/Get Out the Vote video, The Big Schlep, a couple of weeks ago,Â  I thought I was in heaven. Young, edgy politics? I’m sold.

Well, right now, all I can say is sell, sell, sell. The establishment (because I’m such a hipster) has ruined Sarah Silverman and the Big Schlep. If I have to read one more article from some middle aged journalist writing an article about the effect of the Big Schlep (like this one or maybe this one), I’m going to vote Libertarian.

In one of Silverman’s bits that is far too inappropriate to post on this blog in full, she says that if you have to explain a joke, it really isn’t that funny. Well, the Big Schlep is officially lame in my books. 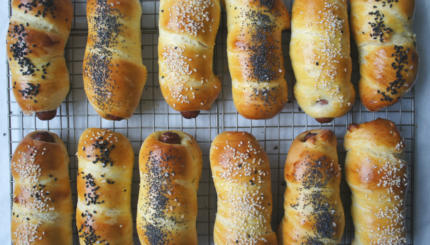 An auspicious food for Rosh Hashanah.