Our newest batch of articles includes an essay of mine on Franz Kafka, a Prague writer from the turn of the previous century who’s probably sparked more speculation, mystery, and drama than almost any other recent author. I read somewhere doing my research that academics have done more analysis-per-word of Kafka’s oeuvre than any other author, ever (but I have no idea where. Surely, Shakespeare and the Bible would both beat him out?).

Regardless of verbiage, Kafka has sparked more creative–or, at least, innovative–critique than any writer I can think of. The artist Star St. Germain, who I admire immensely, recently did this portrait of Kafka for Weird Tales: 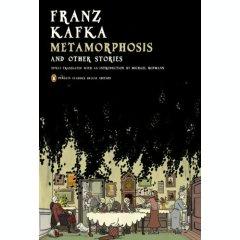 Meanwhile, Penguin Classics has just published a new translation of Metamorphosis, and the cover, by comic artist Sammy Harkham, brings the awesome.

Michael Hofmann’s translation is crisp and clean — although, as Daniel Septimus pointed out in these pages, it’s hardly necessary, given the abundance of good translations out there, and the continuing controversy in translating the titular “monstrous vermin” of the Metamorphosis itself. I cite the cover, though, because in many ways it’s a translation that’s both more radical and more faithful to the original. The back cover flap, a sequence taken from Kafka’s diaries, has actual writing in less than half of its twelve panels, but in its quotidian depiction of Kafka’s life as both nascent and ethereal, it endows a whole new context to his stories. It doesn’t accuse him of being a fan of pornography, yet it provides the context wherein he could have been. The real insight comes in interpreting these trivial gestures — wherein Kafka dreams of an angel, and realizes it was a piece of detritus from a ship that hangs in his room — and, through the simple act of lighting a candle, turns it into something that’s both pathetic and beautiful.

Which is probably what Kafka would have done himself…you know, if he wasn’t already Kafka.

The Book of Psalms (Sefer Tehillim)

These 150 poems feature prominently in Jewish liturgy and are among the Bible's most widely read verses.