Lisa Alcalay Klug’s new book, Cool Jew: The Ultimate Guide for Every Member of the Tribe, is a history and how-to manual of…well, being a cool Jew. Among other things, she has a yarmulke decoder, a “Marley or Matisyahu?” lyric contest, and the funniest example of Jewish Geography-in-action I’ve ever seen. But our favorite part of the book is this brief history of the book Curious George…and how it narrowly escaped from the Nazis. And just to give you an extra bonus, Klug has done a DVD-extras version of the page. Just click away to see.

Did you know Curious George is a Heebster? It’s true. The “parents” of Curious George, Hans Augusto Rey and his wife Margret Rey, first met in their native Hamburg, Germany. They remet and married in Rio De Janeiro.

Later, the happy couple moved to Paris and there, they conceived their story about a lovable, inquisitive monkey. As the Nazis began their advance on Paris, Hans realized they were in danger. Much like their beloved George might, Hans cobbled together spare parts into two bicycles. And in the early hours of June 14, 1940, he and Margret started pedaling.

Within hours, the Nazis occupied Paris but the Reys had already escaped to safety. Four days later they reached the Spanish border, bringing their precious manuscript with them. From there, they traveled on, to Lisbon, Brazil, New York City, and finally, Cambridge, Massachusetts, where they lived out the rest of their days. 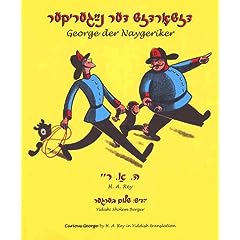 Like Babar, Bambi, Pippi Longstocking, Oliver, and other fictional childhood heroes, George is an orphan. And much like the Reys, he, too, is a refugee from another world. Echoing the Reys’ escape to freedom, each of the seven George books includes an antic chase scene, helping sell millions of books in many languages. Naturlich, naturally, there is a Yiddish version entitled George der Naygeriker.

How did you pitch this book? Did the people you spoke to understand the first thing about cool Jews or, as you term them, Heebsters?

I included two articles in my proposal that I wrote on the eve of 2006. One was about how cool it is to be Jew in the Bay Area for the San Francisco Chronicle. The other was about eight nights of Chanukah kitsch for the Forward. These two stories had something essential in common. And when I thought of a concept to encapsulate that, the word Heebster lit up in my brain like a neon sign. I already had some early ideas mapped out, but once I came up with the book’s alias, The Heebster Handbook, the idea fueled the project. My non-Jewish editor Christine gets it. She grew up on Long Island.

Your own background is just as varied as the Reys’ travel pattern. What sort of traditions did you grow up with? How do you think your varied background played into your quest to define Jewish cool?
My father is an Ashkenazi Holocaust survivor from a modern Hasidic, German-speaking Jewish family who lived in Danzig. Before World War II, Danzig was an independent city-state between Germany and Poland. My dad grew up speaking German, Yiddish, Polish and studying Hebrew. After the war, my dad recuperated in France. My mother is from Panama and her Israeli parents descend from Ladino-speaking Jews from the Balkans. She spent part of her childhood in Israel.
My parents met and married in California, where I grew up. We followed most of my father’s minhagim (traditions), and ate a lot of my mother’s favorite tropical fruits. Sometimes my school lunches were wacky combinations, like gefilte fish and coconut.
My parents inspired me to experiment with language, culture, travel and sometimes cuisine! And that has influenced the diversity reflected in the pages of my book. Cool Jew isn’t autobiographical but between the lines, you can see how my roots come into play. My parents had very rich Jewish experiences in other countries and cultures. And my book grew out of all the ways I’ve sought to create meaningful Jewish experiences of my own.

How did you first find out about H.A. Rey and his wife escaping the Nazis on bicycles?
I always loved Curious George (that’s my George dreidl that appears in Cool Jew). I’m fascinated by survival stories and was one of those kids always on the lookout for Jewish heroes. Cool Jew is filled with them!

In 2005, writer Louise Borden published a book called The Journey That Saved Curious George: The True Wartime Escape of Margret and H. A. Rey. The story was widely reported in the media. Once I learned about the Reys’ amazing escape, I knew I had to include their story in my own. They were so Heebster!

What’s your take on the Jewish hipster revolution in general? Fad, or is it here to stay?
Jewish innovation and creativity have never been more celebrated. One example: my book includes an online directory of Jewish resources and a “Heebster Jewke Box” that highlights the Jewish music scene. Both listings are extensive and yet, there’s already more to add. All signs are go that a Jewish cultural revival is afoot. I’m optimistic.

You’ve got kind of a globetrotting thing of your own going on–you spend time in Israel, California and New York and you balance a bunch of things everywhere, personally and professionally. How do you balance things? And why are the Jews such a wandering people?
My “balance” is to accept things slightly out of balance. That feels familiar. I reckon that’s how professional jugglers actually manage to keep all those balls in the air at once.

As for the wandering, we Jews have shpilkes. It’s genetic. Or spiritually ingrained. We’re always seeking. And that’s a good thing.