I’ve been thinking about what are arguably the two biggest scandals in the music industry right now: illegal downloading and frum Yiddishkeit.

On one hand, music is becoming more readily available, conventional means of turning a profit are no longer working, and the Big Men in Black are trying to get everyday folks in trouble for illegally acquiring songs on the Internet. On the other, many Orthodox Jews are becoming more and more rigidly obsessed with squeezing all the secularity out of our culture–canceling a the New York Times subscription today and demanding that Hasidic singers stop performing live and making “idols” out of themselves the next.

Okay, okay–admittedly, these might not be *the* two biggest music scandals. But there’s a common moral therein: there’s a paradigm that’s been broken, and something needs to change in order for the simple equation of music + listeners to keep happening.

In the secular music industry, there’s probably going to be some shaking up and serious discussion of this report about the band Radiohead’s new pay-what-you-wish album sales, which was issued yesterday by Will Page, chief economist at British copyright organization the MCPS-PRS Alliance, and Eric Garland, CEO of Big Champagne. What they say isn’t news to anyone–free access to good music makes people take notice of it, listen to it more, and value it more–whereas trying to license music will create more problems and freeze out potential customers. Yes, the music industry (that is, the big companies–Universal, Capitol, Time Warner, and their cohorts) is still a huge corporate titan, but we’re seeing bigger and bigger bands endorsing illegal downloads because, they say, if people really like it, they’ll want to make it a part of their lives.

And thus, we arrive at the yeshivish world. A few months ago, over 30 important rabbis shut down an important charity event in the yeshivish world, saying that the event was not kosher due to “sin, ribaldry, and looseness.” When pressured, several important rabbis, including R. Shmuel Kamenetzky, rosh yeshiva of the Talmudical Yeshiva of Philadelphia, said they had a measure of pressure from other rabbis to cancel the event. When the rabbis involved were interviewed, it sounded like a deck of cards falling down–one rabbi signed on without asking too many questions, another rabbi heard the first rabbi was signing on and dittoed him; and then, somehow, big men in frock coats and fur hats singing in front of a crowd became “too goyish” for the nation of Israel.

What are the singers doing to fight back? Not much. While fans are posting errant blog posts, Lipa Schmeltzer, the singer at the center of the fracas, released his new album, “A Poshiter Yid,” last month. The title means “A Simple Jew,” and along with the photo shoot (Lipa learning Torah in front of a shack), it might be the start of a whole new image for Lipa. On one hand, it could be seen as Lipa scaling back, taking himself out of the spotlight and retreating. On the other, Lipa’s previous career highlights–such as this music video–suggest that the man has no notion of, or no use for, subtlety. (There’s a great analysis/review of the CD here. Just scroll past the account of one of the rabbis in question smashing up the car of someone listening to a Lipa CD.)

And if this is the first subversive strike back at an establishment that sees forbidding things as a slash-and-burn exercise in Torah skillz, well, rock on–and kol ha’kavod. This might be the first step in Jewish music following–if not musically, than ideologically–in the footsteps of Radiohead. 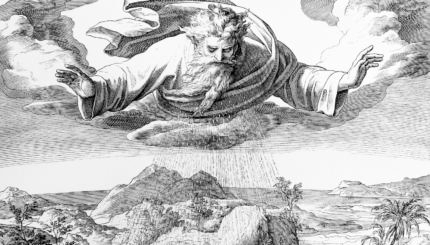 Believers and skeptics alike tend to view God similarly -- as big, all-powerful, and good. But there are other options.