How to Set Your Seder Plate for Passover

A little bit like a fruit salad, according to frequent MJL contributor Jill Jacobs over on Jspot:

1) an orange (women/glbt), olive (peace in middle east), a broken ring (marriage equality), and even a flower on the seder plate (latter is, inexplicably, a vegan substitute for the beitzah/roasted egg).

2) at least four matzot (when I was growing up, the fourth was for Soviet Jews; now it’s for Darfuri refugees, Jews living in oppressive countries, and/or contemporary slaves.)

3) an empty chair for the captured Israeli soldiers, victims of terror, and/or Darfuris (again). (Given the size of my apartment, the people who showed up were lucky to have chairs, let alone the people who didn’t come)

4) an unlit candle for Tibet.

5) a cup of water for Miriam, and a fifth cup of wine for the state of Israel, the captured soldiers (again), or Jesus (uh. . . whoops–that would be the suggestion of the messianic website).

6) a fifth child, who represents either Holocaust victims or the unaffiliated (ok–this one wouldn’t actually take up any of the precious space in my 2-inch wide Manhattan apartment. . . ).

Whether you’re hosting your own seder and looking for a new matzah cover, or going to someone else’s and want ... 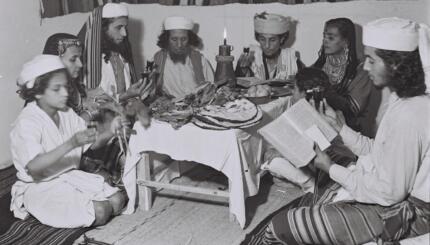