Understanding miracles is difficult in our time. None of us have witnessed a great sea being split, a burning bush that didn’t burn, or a teeny drop of oil lasting for eight days (the question as to whether anyone saw these is a whole other story.)

However, the celebration of Hanukkah is one of miracles. Whether we choose to believe the tale of the oil or look to historical evidence of the Maccabean revolt, the holiday centers around believing in something bigger than ourselves.

With that I share the new ritual of a friend, who spends his Hanukkah trying to understand what miracles look like in modernity:

The holiday of Hanukkah begins tonight and many around the world will begin to celebrate the Festival of Lights. Candles will be lit, dreidels will be spun and latkes will be fried. However for myself, I enjoy most of all a more modern form of celebrating.

At its center, Hanukkah is the celebration of a great miracle. The four sides of the dreidel tell us “Nes Gadol Hayah Sham,” a great miracle happened there–the story of an improbable military victory the Maccabees-led army won over the Greeks. While a miracle event of such magnitude can not be found in modern times, the term miracle itself does have a distinct connotation, especially in the world of sports.

In February of 1980 the world of sports was briefly centered on Lake Placid, NY, for the 13th Winter Olympic Games, the highlight of which is now known as the “Miracle on Ice.” The United States hockey team, a collection of college athletes, all amateurs and all far less experienced than most of the other competitors, began the games with an impressive run through the round robin portion of the contest.

On that night in Lake Placid, a modern miracle took place. The US fought through the first period to a 2-2 tie with the Soviets. After each team added a goal, US team captain Mike Eruzione scored with exactly 10 minutes remaining in the third and final period giving the US a 4-3 lead. As the final minutes ticked away, the crowd, infused with a newfound sense of patriotism, serenaded the team with chants of “U-S-A,” fully understanding the improbability of the event they were witnessing.

Also reaching that understanding was Al Michaels, who was announcing the game on ABC. With the final moments passing by, Michaels uttered his now legendary description of the game’s close.

“You’ve got ten seconds, the countdown going on right now! Morrow, up to Silk… five seconds left in the game. Do you believe in miracles?Â  YES!!!”

Michaels’ description of the US victory as a miracle immediately caught on giving the triumph its classic name. Team USA completed the miracle winning the gold medal in the next and final game against Finland.

In the years since, there have been many tributes to the Miracle on Ice. Sports Illustrated voted it the greatest sports moment of the 20th century. HBO presented a documentary on the events in 2001 titled Do You Believe in Miracles? Most recently, the Disney movie Miracle, starring Kurt Russell was released in 2004. That film is my modern day celebration of Hanukkah.

To compare the miracle of a military victory for religious freedom to the miracle of an unlikely hockey victory (albeit a big one), is obviously a stretch.Â  However, the fact being that the term miracle is used in both instances is enough to give a modern understanding and at least some appreciation to the events of over 2,000 years ago. This is why on the second night of Hanukkah, after lighting the candles and playing a game of dreidel, I will sit down with my Miracle DVD and sing my own adaption of the classic song. 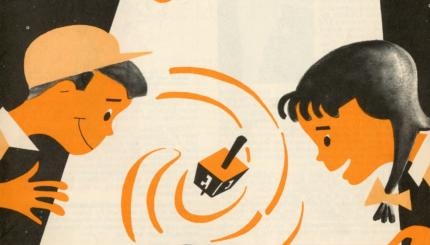 The Surprising Origin of the Dreidel

As you might have guessed, I’m a bit obsessed with the Olympics. They provide for hours of fun and excitement ...

From sufganiyot to the hannukiah, here are the major symbols of the holiday.