Tallits Bring Out the Worst In People

My name is Jason Herman and I am the rabbi at the West Side Jewish Center in Manhattan. I want to share with you all my experience of being arrested with 21 colleagues in an act of civil disobedience outside the United Nations on April 17th.

First, let me explain why it was I decided to participate in the mass Rabbinic Arrest. While I have attended many rallies and demonstrations over the last 20 years beginning with the march on Washington for Soviet Jewry in 1987, I had never been part of anything unlawful and have certainly never been arrested before.

I had friends who were arrested in college as part of the Free Tibet movement, and having learned with Rabbi Avi Weiss for four years, I was aware of his past arrests. I looked at those arrests as a means of an expression of strong anger when it is hard to be heard otherwise.

Some issues are very serious, but until the seriousness is recognized by the masses, something a little more dramatic needs to be done. I felt the issue of Iran was one such issue, and for that reason, I felt getting arrested was warranted. I believed that taking that serious step would demonstrate to other Americans and American Jews in particular that we are prepared to loudly voice our outrage as the world’s ignoring the threat of Iran, and that the world’s business cannot go on as usual while the threat remains.

The rally began like many other rallies I’ve been to–a few speeches, some chants by the crowd, and the occasional cheers and words of support from motorists and passersby. Then we began the march from the Isaiah wall, singing Am Yisroel Chai.

The march itself was moving because with it came the anticipation of what would happen next. I was about to take a very serious step, and one that I wasn’t even sure I wanted to take. I was admittedly uneasy. Would I feel humiliated looking like a criminal? How would the police treat me? What would everyone think of me?

When the moment came, we sat down on the steps–our official act of disorderly conduct. We were instructed that would be arrested individually and told to comply with the arresting officers. The whole time, while singing, “Ani Maamin” I was hoping two things: First, that I not be arrested first –having never done this, I wanted to follow the model and leadership set by others. The second was that after being arrested, we be kept together. I did not want to go through this experience alone.

Thankfully, I saw Rabbis Avi Weiss and Rabbi David Kalb arrested first. They stood up proudly, cooperatively placed their hands behind their backs, and were led off to the paddy wagon. We kept singing Ani Maamin. Several more rabbis were arrested before it was my turn. The singing continued.

When the police finally pointed to me, I knew what to do–I stood up calmly and proudly as the others had done before me. I stood in the place they told me to, and put my hands behind my back. At that moment, I was not afraid, not humiliated, and did not even feel like a criminal. Rather, I felt like I was doing exactly what I was supposed to be doing.

It wasn’t easy, and wasn’t enjoyable, but it gave me the satisfaction of doing something really important and spiritual. The best ritual I can liken it to is burying the dead–one never wants to do it, one is sad to do it, but one feels really fulfilled for having performed such an important mitzvah. In this case, I only hope my actions served to save lives, rather than cover over the ones that have been lost.

As I was led away to the paddy wagon, my feelings of apprehension returned. My arresting officer then asked me, “Have you ever been arrested before” I replied, “No.” He then said, “It’s a long process, but not a difficult one. There is no need to be nervous. I’ll be with you every step of the way; if you have any questions or need anything just ask.”

Wow!!! How reassuring was that? Do the police treat all criminals like that? I’d be very proud if I learned that they do. It is quite a testament to the NYPD that they would treat a group of people who had become criminals with the utmost dignity and respect.

Once the doors of the paddy wagon were shut and locked, a feeling of calm ensued. The most serious part was over. In the ride to central booking, we shared divrei torah, sang a few songs, and began to plan our next steps.

Arriving at Police headquarters, we were brought into a large holding cell, where we began dancing and singing. While that experience was more fun and enjoyable, it also cemented the fact that what we had just done was a spiritual act and in the interests of the Jewish people. The police brought us some fruit to eat, we davened mincha, and committed ourselves at that moment to officially beginning a new movement. Our slogan: “Stop Iran Now!”

The overall experience in the holding cell, though long (about five hours) was actually a positive one. It gave our group a chance to get to know each other on a more personal level, while at the same time planning more mainstream actions. We were able to do this without the distractions of cell phones, walk in appointments or all of our other responsibilities.

Finally, at around 6:30 that evening, we were released one by one, and escorted to the street by one of the officers. The officers told us they were proud of what we had done. Many supported our cause, and asked us to understand that they just had a job to do. After regrouping on the street corner, we gave each other one final embrace and word of encouragement–yasher koach. May we all have the strength to confront our enemies, and emerge from the struggle a more united and committed people.

Apparently, All Jews Are Men

It hasn’t been an awesome few weeks for Jewish women. There has been a lot of brouhaha about the RCA ...

Just Like The Sopranos, But With Thicker Chest Hair

A known Israeli mobster, Yaakov Alperon, was assassinated on Monday in Tel Aviv.Â  Alperon’s car blew up, killing him and ... 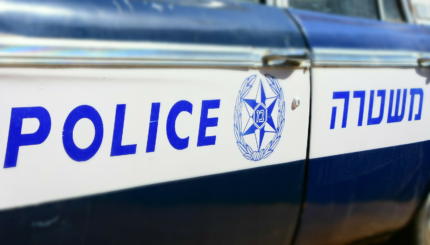 Though the Torah commands the appointment of "officers" to uphold the law, Jewish tradition does not recognize crime as a legal category.