Chef Daniela Moreira was raised in central Argentina, in a small town called Alta Garcia. She grew up eating lots of pasta, beef, and pizza. Desserts starred dulce de leche, a sweet, caramel-like condensed milk that is popular in Latin American pastries. She knew nothing about Jewish food.

So how is it that this 29-year- old, non-Jewish Argentinian is the chef behind Washington D.C.’s hottest “Jewi-ish” deli?

At Call Your Mother deli, you can find her take on wood-fired bagels, creative schmears, and homemade challah.

Moreira was in her 20s the first time she had a bagel. She was introduced to them by Andrew Dana, who she met at his food truck, Timber Pizza Co., at a farmers’ market. Dana and his partner, Chris Brady, were slinging pizzas baked in a wood-fired oven that they hauled around in their sky-blue Chevy. Moreira, a graduate of the Culinary Institute of America, asked if they needed help; they offered part-time work and within two weeks she was a full-time member of the team. Today, the Timber business includes mobile wood-fired ovens and a highly successful brick and mortar restaurant that consistently shows up on lists of best pizzerias in D.C. and beyond.

Dana has always loved pizza — and bagels. So, when Jeff Zients, a friend of a family friend, was looking to open a Jewish deli in D.C, he turned to Moreira and Dana for advice. They created a business plan and presented it to him: Just as they had explored the concept of wood-fired pizza, why not open a deli that features wood-fired bagels and the foods that go along with them? Zients approved the concept of a “Jew-ish” deli.

After their initial excitement, she got to work. Moreira recalls her initial panic: “Why did I say yes to this?” she thought. “I don’t know anything about bagels. I know nothing about Jewish food.” She spent nine months working on a bagel recipe until she created the perfect one. “Our bagels are crisp on the outside because of the wood fire and chewy inside. They are softer than New York bagels and not dense like Montreal bagels.”

At first, the plan for their “Jew-ish” eatery was to build a menu similar to one you would expect to find in a classic Jewish deli: bagels and cream cheese; matzah ball soup; hot dogs; pastrami on rye. But following the soft opening for family and friends, they scrapped that idea.

“It’s hard to compete with nostalgia,” said Moreira. “We realized we needed to be true to ourselves and to offer the kind of food that we like to eat.”

You can get bagel, lox, and cream cheese at Call Your Mother, but if you want to shake things up try the Amar’e (named for basketball player Amar’e Stoudemire), a za’atar bagel slathered with candied salmon cream cheese, crispy shallots, and pea shoot salad. Instead of pastrami on rye, treat yourself to The Greenberg, a pastrami, brisket, cheese, and sofrito sandwich served on their own challah sub rolls.

And speaking of challah, Moreira makes that, too, every Friday. She offers a traditional take on the braided eggy bread as well as a creative version, like pistachio challah. “The first book I bought to learn about challah, braiding, and other Jewish breads was Modern Jewish Baker. I have made every recipe out of that book,” said Moreira. And she found herself turning regularly to The Nosher for inspiration and advice.

Their most popular bagel offering is The Shyne – your choice of bacon or pastrami combined with egg, American and cheddar cheeses, and spicy honey on an everything bagel. That sandwich alone represents 50% of the restaurant’s sales.

In the year and a half since Call Your Mother opened, the restaurant has been featured in Conde Nast Traveler, The Washington Post, and Bon Appetit named it one of its best new restaurants of 2019. Why so popular?

“We source only local ingredients. We buy our produce from the farmers at the markets. The product is a high quality. We are doing something right,” said Moreira. And despite – or perhaps because of – their unusual take on Jewish foods, customers keep coming back.  “I feel like we have created a place for everyone.  By not offering very traditional foods, everyone is welcome. So much of what we offer is prepared in a way that people have never tasted before,” said Moreira.

Moreira is always looking for new and inventive foods to add to her menu. Next up? Jelly donuts that she will fill with her homemade, seasonal jams like raspberry, apple, peach, and nectarine. She and Dana are opening two more locations of Call Your Mother in Georgetown and in Capitol Hill in March 2020. And as of August, Dana is not just her business partner but her fiancé, too, so a wedding is in the future.

When Moreira’s father heard that she was opening a Jewish deli he said, “What do you know about that?” She sent a picture home of her bagels and her family said, “Those are not bagels. They’re donuts!” It took a while, but now they get it. Today, when guests visit her home in Alta Garcia, her mom serves them her daughter’s bagels and babka that she keeps stocked in her freezer. Moreira’s “Jewi-ish” cuisine has made it home.

For a taste of Call Your Mother deli, try their easy recipe for candied salmon cream cheese. 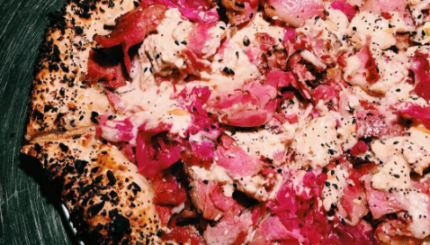 Image from @speedyromeo instagramDijon mustard. Katz’s pastrami. Smoked sauerkraut…and everything bagel spice. Is your stomach growling yet? Now imagine all ... 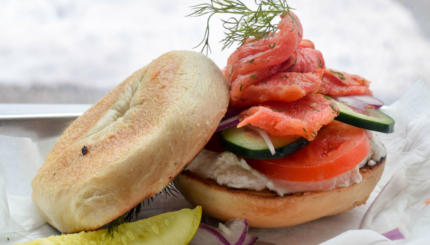 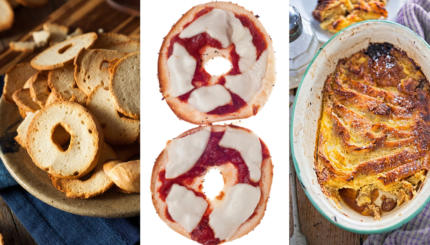