When contestants on The Great British Bake Off were tasked with making rainbow bagels, it, understandably, prompted my American colleagues to ask if Paul Hollywood, who assigned the challenge, had ever actually tasted a decent bagel.

As the only Brit in the office, I felt compelled to jump in. Of course he has, I reasoned, and I don’t mean on his travels to North America. There are great bagels a’plenty on his home turf.

OK, they retorted, so what makes a British bagel (BB) different from a New York bagel? Or a Montreal bagel? And does the quality even compare?

Reader, I was stumped. I thought about it every night before I fell asleep. I chewed it over with family and friends. I was sucked into multiple deep, dark Google sessions. Why — when I was born and raised in the U.K. and have written about Jewish food for the best part of a decade — was I struggling to define British bagels?

The answer is two fold:

Though many — including British consumers — consider bagels to be “American,” they are not. Bagels are probably Polish, though many cultures around the world eat breads with a hole in the middle.

Eastern European (mainly Polish) Jewish immigrants brought bagels to the U.K. (as early as the start of the 19th century) and North America (in the late 19th century). As in the Old Country, bagels were cheap, everyday food sold street-side by poor hawkers. The holes ensured they were easily transportable — they were threaded through strings or sticks.

The original bagels were simply defined by being boiled then baked, with a hole in the middle. British bagels haven’t changed much since then, which brings me to my second point:

Although the British bagel hasn’t changed much, its North American siblings certainly have. They’ve received multiple glow-ups, flourishing, and dwarfing the humble BB.

New York, particularly, has been so successful in its consistent effort to reinvent the bagel — making them bigger, asserting the importance of malt in the dough, popularizing lox and cream cheese (thanks to Philadelphia cheese company in the 1950s), creating the “everything” bagel in the 1970s — that they have become synonymous with the city. 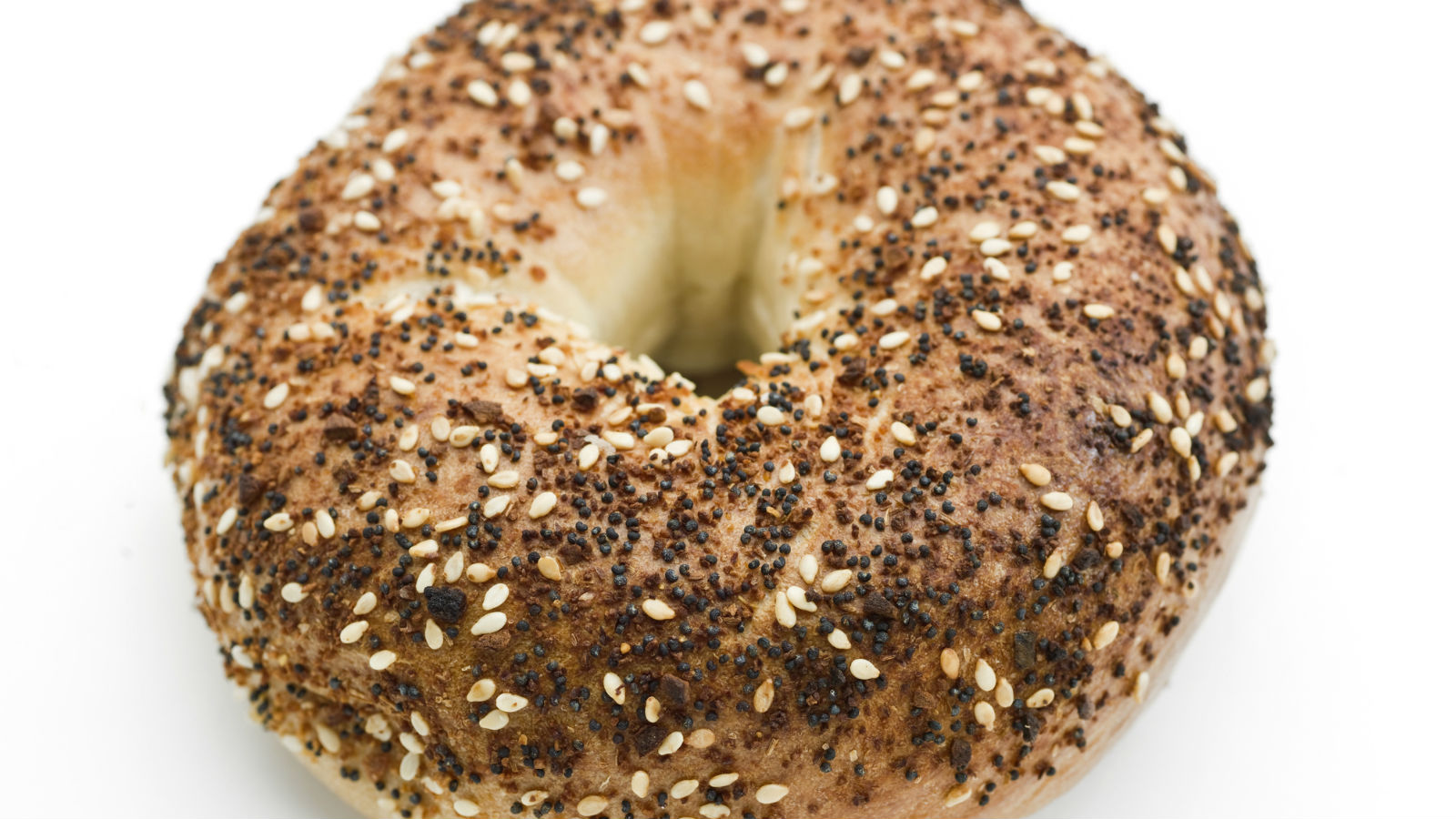 The success of the New York bagel is —at least in part — due to the sheer number of Jews living in the city, and their overall attitude of embracing and celebrating Jewish culture. British Jews, in contrast, have a quieter voice, not only because they make up 0.05% of the U.K. population, but also because they are more cautious about standing out. In contrast, there were so many bagel makers in New York City that they created their own union.

So, is there such thing as a British bagel?

Yes: They are small, chewy, and often have a shiny crust.

They are much more similar to New York bagels with one key difference: BBs have remained a cheap, everyday food.  A classic bagel and lox at Russ and Daughter’s is $14, a nova bagel with all the trimmings at Ess-a-Bagel is $14.95, but a smoked salmon and cream cheese bagel from North London’s Carmelli Bakery is £ 2.60 (around $3.30) and £ 4.10 (around $5.30) at upmarket Panzer’s Deli. A salt beef bagel from East End Beigel Bake is £4.50 (around $5.75), and subbing the salt beef for salami makes it even cheaper.

That’s the another distinction: It is as common to order a smoked salmon bagel in the U.K. as it is to order a hot salt beef bagel with English mustard, a pickle on the side. 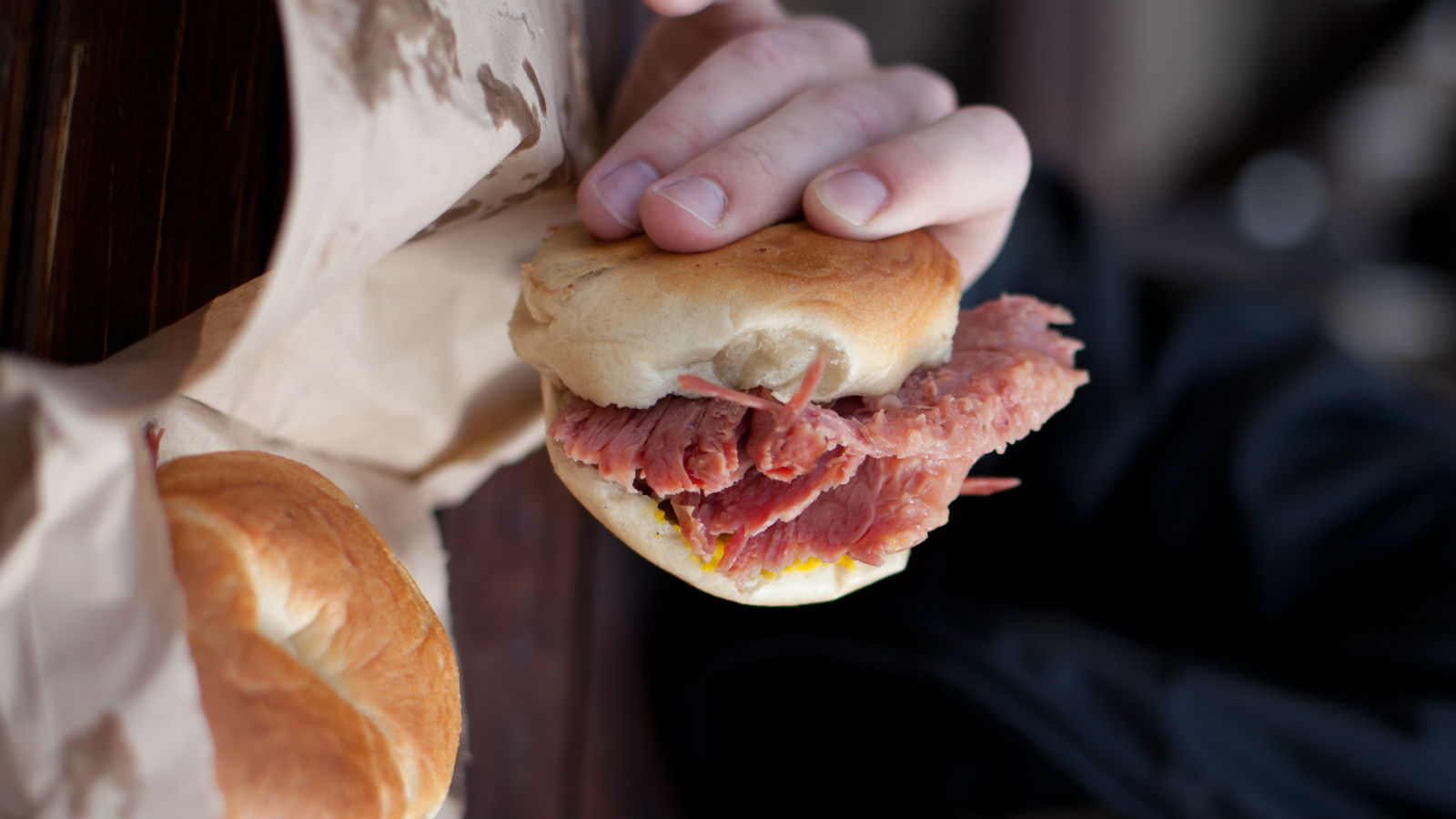 The latter, particularly, is a popular late night snack — often after a night out on the town. Yes, British bagels are eaten around the clock. Why? Because unlike New York, London does sleep, but bagel bakers, who often work through the night, do not. Carmelli Bakery is open for 24 hours from Saturday night (after Shabbat) until Sunday, Beigel Bake is a notorious post-club haunt.

Oh yeah, and some Brits (mainly Londoners) spell them “beigels” (which is actually just another misspelling of the original Yiddish “beygl.”)

Where to Find a Good British Bagel

It’s highly unlikely you’ll find a good British bagel by chance, as you may in New York City. Your best bet is to head to the Jewish communities: Prestwich and Broughton Park in Manchester, Alwoodley in Leeds, Gateshead. Plus, of course, North-West London, notably Carmelli Bakery, Grodinski’s, and Panzer’s Deli. In the city’s East End, the leftovers of a once-thriving Jewish community still flourish, like the rivaling neighbors Beigal Bake and Beigal Shop. 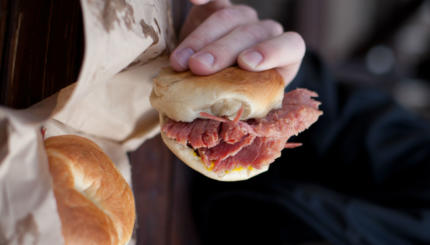 This Bagel Makes Us Want to Go Across the Pond

London's Beigel Bake fills its bagels (aka beigels) with corned beef and more! 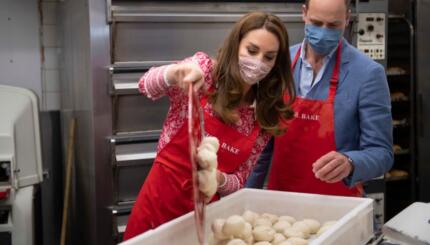 Prince William and Kate Middleton Made Bagels and It Was Smashing

The Jewish-royal crossover we never knew we needed. 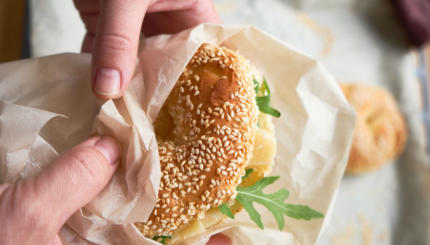 The longstanding debate about New York vs. Montreal bagels continues.