Few cities have as robust of a Jewish food scene as Montreal, where Jewish immigrants from Eastern Europe and North Africa meld their respective heritages in this cosmopolitan bilingual city in a French province of Canada. There’s a rich bagel culture and a dedication to baking as a craft in the city, where Jewish residents harbor deep connections to their favorite delis and to the neighborhoods with immigrant Jewish stories, even now that they’ve become some of the hippest in town.

Amidst Montreal’s landmark delis and bakeries, a new crop of young chefs, producers, and storytellers are crafting vibrant Jewish food experiences that explore Jewish food traditions and pay homage to Montreal’s unique legacy. Stay up all night and get bagels at 2:00 a.m. at Fairmount Bagels, or trek to Côte-Des-Neiges or Côte-Saint-Luc to hang with the locals over cheese bagels at the kosher bakeries. Plan your meals in advance to make sure you can hit all the fantastic new restaurants that are opening up. It’s an exciting time to eat Jewish in Montreal, and we hope this carefully cultivated list of great Jewish food experiences will keep you happy and full throughout the city. 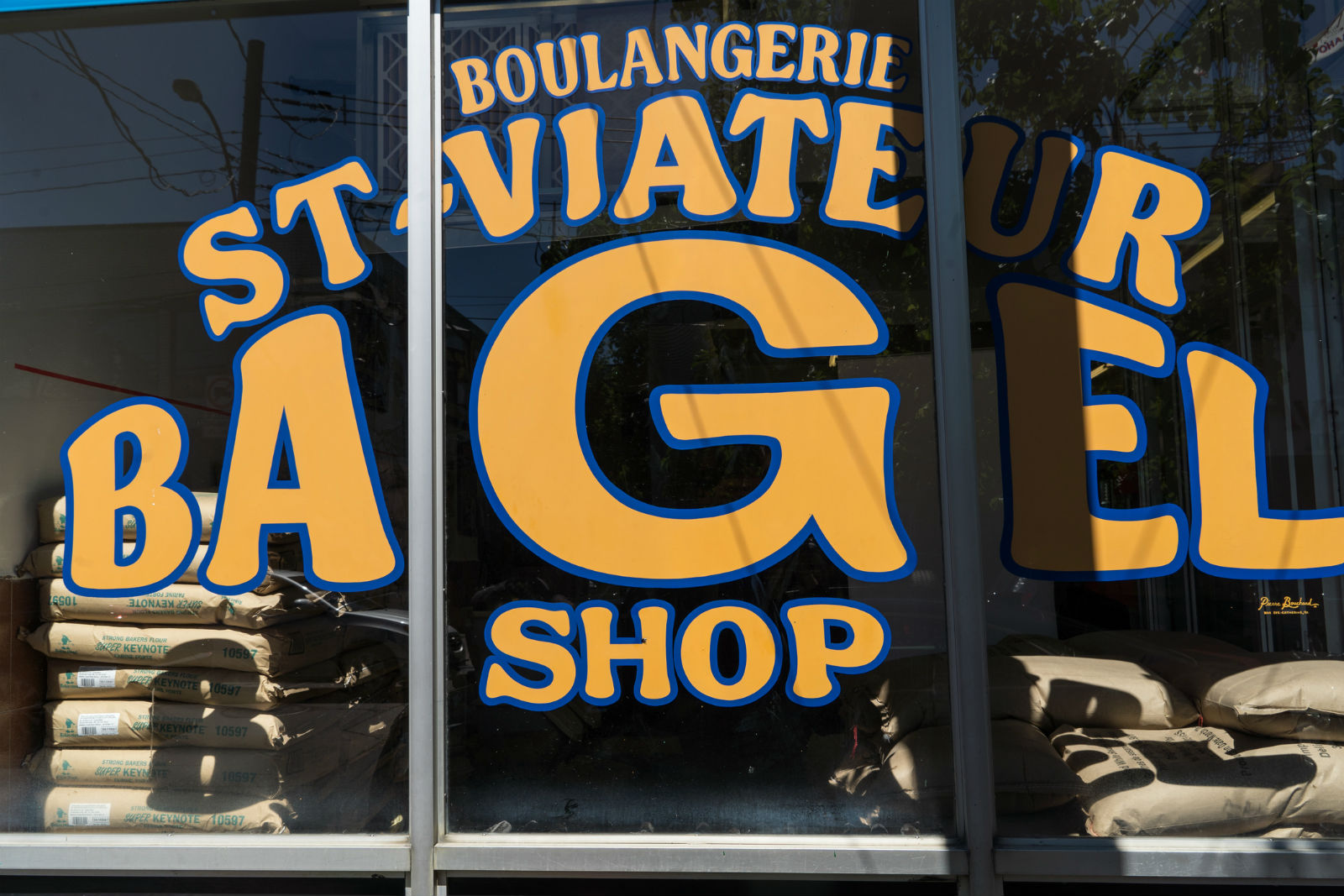 Fresh, hot, and coated in sesame seeds, bagels are a highlight of any trip to Montreal. Throughout the Mile End, you can’t escape the sweet smells of smoke from the wood-fired brick ovens of Fairmount and St-Viateur, the city’s oldest and most esteemed bagel shops. Bakers at both establishments are hard at work boiling the rings of dough in honey water and sliding them into the oven 24 hours a day right in front of your eyes. Montreal bagels are smaller than New York’s and famously use no salt. While you could slice and slather them with cream cheese, they’re best eaten late night or early morning, steaming hot, straight from the oven. Most Montrealers are divided in their bagel shop loyalties, but we’ll leave it to you to decide your favorite.

Pro tip: There are five other St-Viateur locations around the city. And if you’d like your Montreal bagels kosher certified, visit Cote St-Luc Bagel at 5757 Caldwell Avenue. 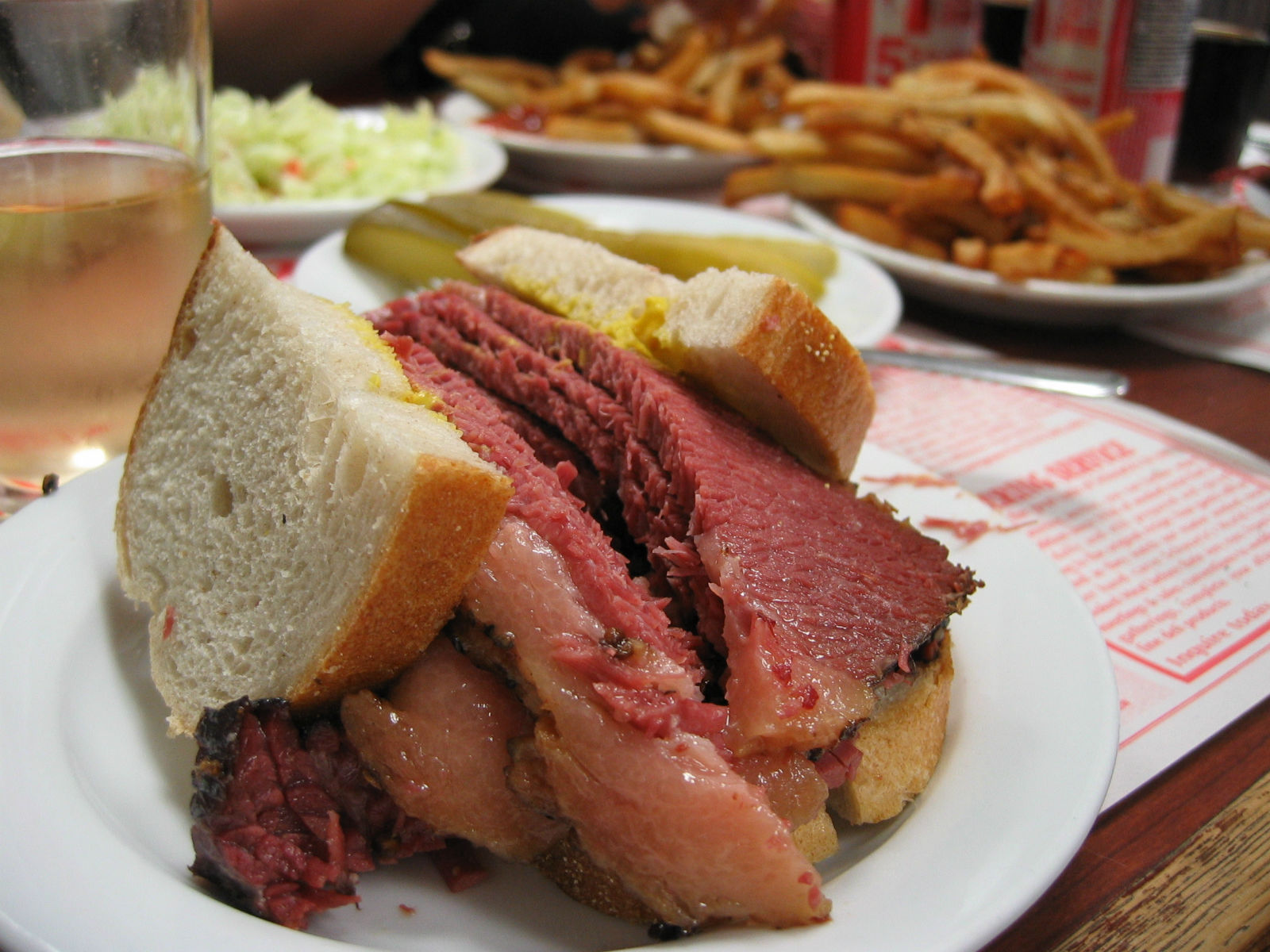 Smoked meat has been a hallmark of the Montreal Jewish food scene for decades and the star of the Montreal Jewish deli. Smoked meat calls for dry-curing brisket, spicing it with coriander and black pepper and then smoking it. Thickly cut, served on rye bread with mustard and a pickle, it’s transcendent. Montrealers pair the sandwich with Cott’s Black Cherry soda. French fries with vinegar complete the experience. The most famous purveyor is Schwartz’s. There are usually lines out the door, even in the dead of winter. Nearby you’ll find The Main and Lester’s. Ask a real Montrealer where to get deli and they will send you a bit further out in Côte-des-Neiges  to Snowdon Deli where you’ll hang with locals and dine on smoked meat sandwiches and karnatzel, a famed Montreal smoked and dried beef sausage. You can try making your own Montreal-style smoked meat with this recipe from Mile End Deli. 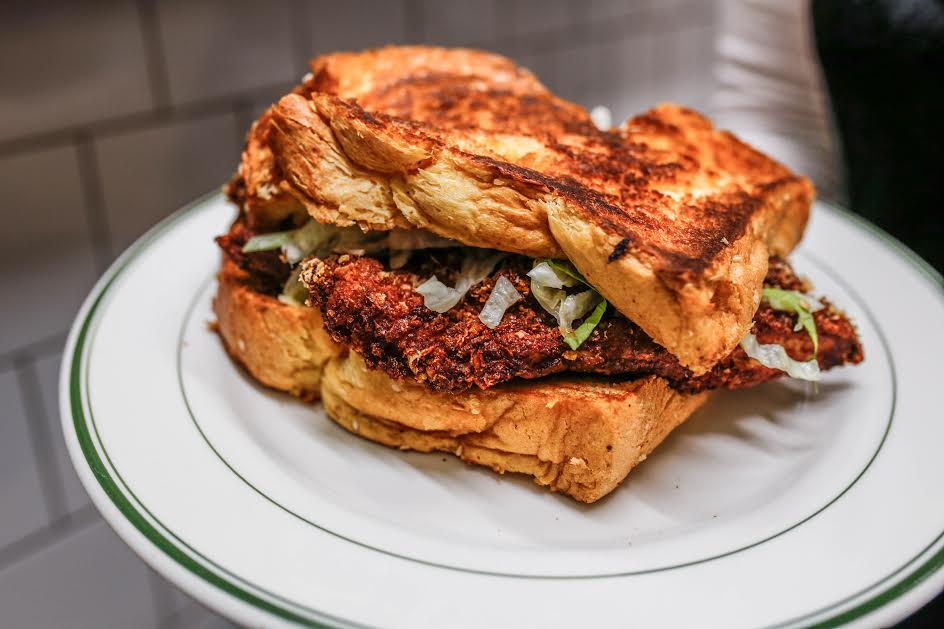 The neighborhood of St. Henri is vibrant, eclectic, and packed with great places to eat. At the top of our list is Arthur’s Nosh Bar. Opened in 2016 by husband and wife team Raegan Steinberg and Alex Cohen, Arthur’s is unapologetically Jewish with the warmth of an old school Ashkenazi deli and a contemporary playfulness that comes through in its dishes. There are also Moroccan flourishes which come from Cohen’s background. Brunch is a particular highlight, especially because of their Arthur’s Caesar, a take on a Bloody Mary garnished dramatically with pickles, olives, and an entire mini bagel with cream cheese and lox. For lunch, the McArthur’s is an absurdly delicious schnitzel sandwich on challah. Finish your meal with a rainbow cookie for some nostalgia-meets-fun. Make your own McArthur’s Schnitzel Sandwich with this recipe from Saveur.

Located inside the Museum of Jewish Montreal in the heart of the Plateau, Fletcher’s is a Jewish cafe open for breakfast, lunch, and brunch. Founded by Kat Romanow, Director of Food Programs, Fletcher’s seeks to tell stories of Jewish cooking through its creative menu. For lunch, try a Moroccan bagel board or a gefilte club; brunch includes a babka french toast; and for dessert there are rare treats like massafan, an Iraqi Jewish almond cookie. Fletcher’s is as much a space for culinary exploration as it is a restaurant. On many weekend mornings you can find live music brunches, and in the evenings you can catch storytelling events, cookbook launches, and pop-up dinners by The Wandering Chew, to name just a few of the regular happenings. Make your own gefilte fish club sandwich with this recipe from Fletcher’s.

Pro tip: The Museum of Jewish Montreal is worth the visit alone. It’s a small, versatile space that functions as a gallery of Montreal Jewish history. Its research comes to life through its exhibitions, walking tours, and, of course, its culinary offerings.

There’s no better way to get a feel for a city like Montreal than to walk its streets and taste its food! Two different companies offer Jewish food walking tours. The Museum of Jewish Montreal specializes in Jewish history and leads an intimate food-focused tour called Beyond the Bagel that weaves through the Mile End and Plateau neighborhoods, visiting food producers and exploring the city’s hidden Jewish food history. Round Table Tours specializes in the gastronomy of Montreal and offers their Jewish Neighborhood Food Tour starting in the Outremont neighborhood and heading south into the Mile End, focusing on the area’s culinary heritage, renowned residents, and local architecture. Both tours run for 3.5 hours. You’ll try staples like smoked meat, babka, rugelach, and Montreal’s famous bagels.

Pro tip: Do not eat beforehand, since both tours ply participants with plenty of treats. Book tours as far in advance as you can and keep in mind that May – October are the best months for strolling. Snow starts falling as early as mid-October.

Chef Jeffrey Finkelstein is a Montrealer to the core. That’s why he returned to his city after stints in some of the best kitchens in Europe to open a cutting edge bakery in the old Jewish neighborhood. His baguettes are some of the best in the city but Hof Kelsten has a particular soft spot for Jewish specialties like challah (available on Fridays) and dark, crusty rye bread (baked daily). The hip bakery supplies some of the best restaurants in the city. In addition to breads, Hof Kelsten serves up pastries, coffee, soups, and sandwiches. So, if you’re craving a chopped liver sandwich or a bowl of matzah ball soup or babka, they’ve got you covered on that, too. 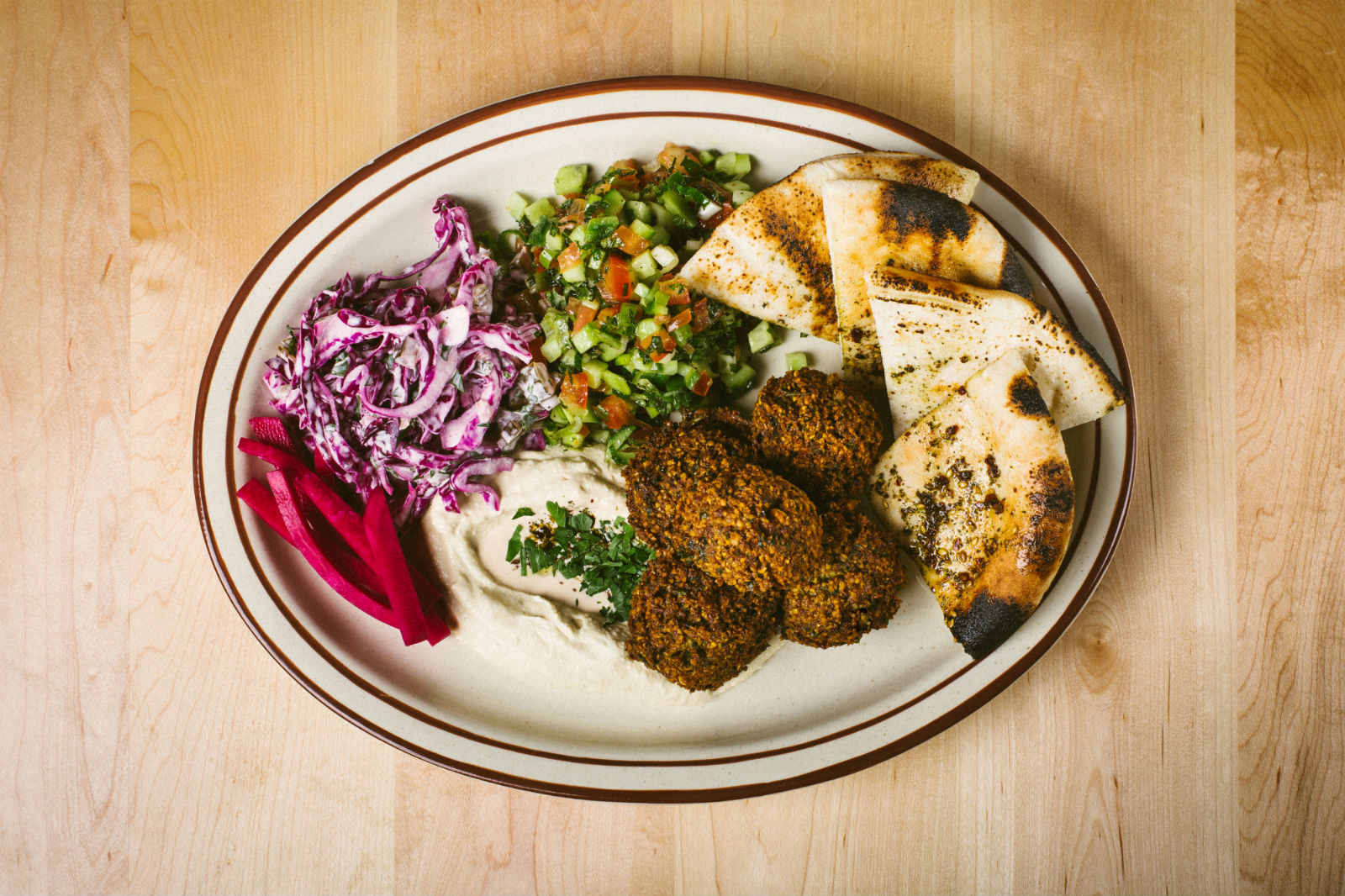 Following its opening in 2014, relaxed Middle Eastern restaurant Sumac quickly became a favorite in the hip, restaurant-studded St. Henri neighborhood. Co-owners David Bloom and Chef Raquel Zagury have cultivated a reputation for some of the best falafel in the city, flavorful Moroccan Jewish salads (Chef Raquel is a Moroccan Jew), French fries drenched in hummus and sabich (fried eggplant, salad and eggs) that makes this place one more piece of the Jewish Montreal culinary puzzle. For other exciting new and delectable hummus and falafel spots, visit the cozy Falafel Yoni or vibrant Birona Hummus Bar, both in the Mile End neighborhood. 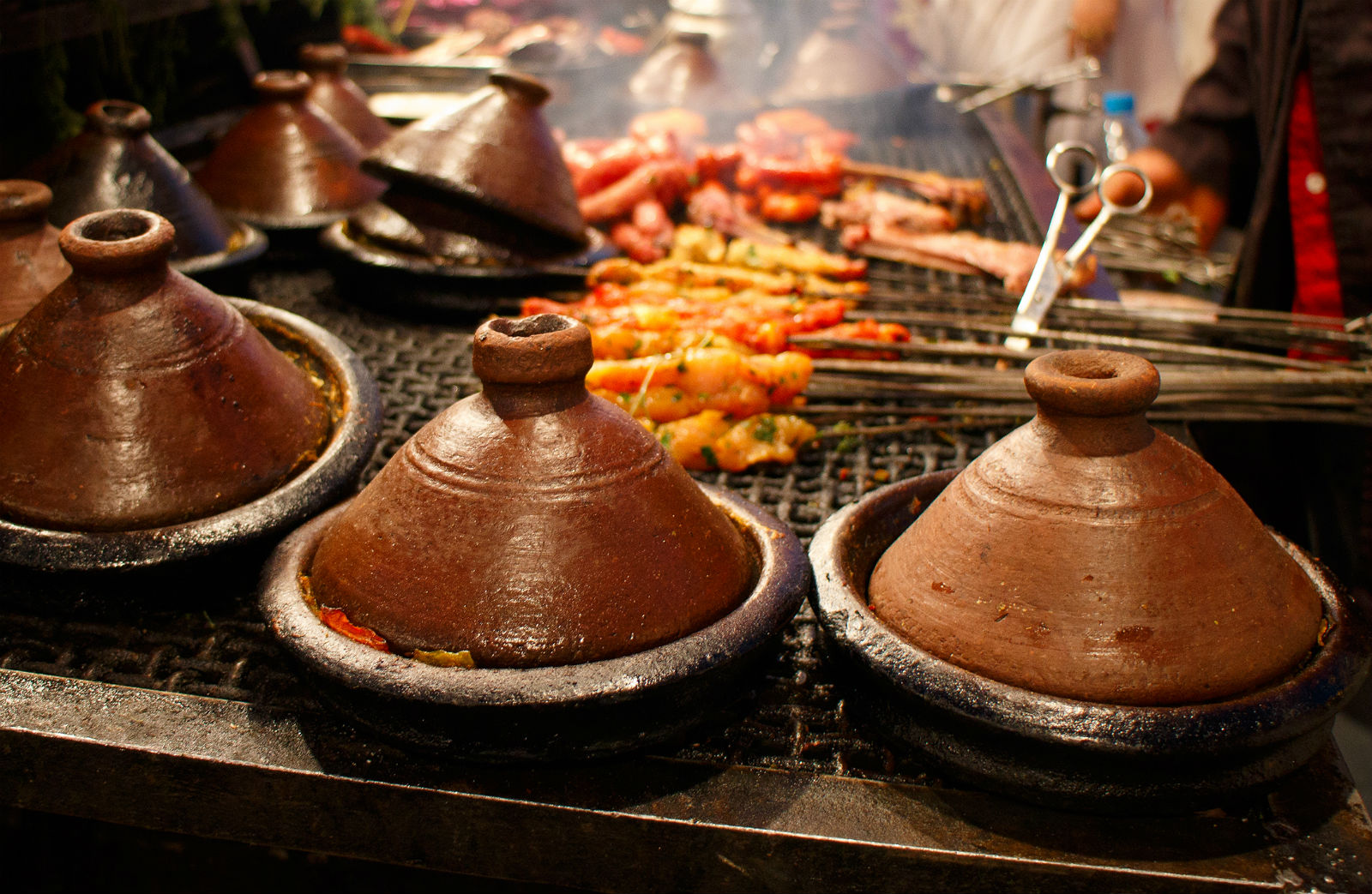 Few cities in the world can boast multiple Moroccan takeout counters, let alone kosher ones. But of course, Montreal continues to be the exception to every rule. Visit La Marguerite, a well-known kosher caterer in Montreal for over 30 years with a takeout counter full of Moroccan treats like olive chicken, veal meatballs, and a variety of Moroccan salads. It’s only open on Wednesday, Thursday, Friday, and Sunday. Patisserie Adar, a neighborhood favorite, is way more than a bakery. Try their spicy filet of sole, salade cuite, and slow cooked dafina.

Pro tip: For another specialty item for takeout, pick up some high quality kosher beef charcuterie by Amsellem Meats, a Montreal-based glatt kosher meat company. While Amsellem’s brick and mortar shop is closed, their products are easy to find online and in grocery stores.

When in Montreal, it’s important to pay respect to the legends that have inspired generations of Jewish chefs. Beauty’s Luncheonette has been a breakfast and brunch fixture since 1942. Known for its lavish brunch spreads, including its mish-mash omelet of hot dogs, beef salami, green peppers, and onions, this is the perfect place to start a full day of Montreal exploration. Wilensky’s, a spartan lunch counter that hasn’t changed much since it began in 1932, is known for its Wilensky special: grilled beef salami and baloney on a Kaiser roll with mustard, flattened on the grill, paired with a pickle and a fountain soda. This no frills landmark is a highlight of many Jewish food tours.

Of particular interest to the Jewish traveler are the various Jewish bakeries (mostly kosher certified) featuring Ashkenazi goods, some of which are unique to Canada. Take the cheese bagel, a horseshoe shaped flaky pastry found only in Canada, filled with sweet cheese blueberry or chocolate. Some of the best in the city can be found at the outposts of Solly the Caterer,  Qualite Cachere (Kosher Quality), or Montreal Kosher, where you can also pick up Montreal knishes or crustless, savory party sandwiches (another Canadian exclusive), and of course challah and other sweets. In the Mile End neighborhood, the Hasidic bakery Cheskie’s makes one of the richest chocolate babkas you’l ever tried. The smells wafting out of this little Mile End bakery are intoxicating.

Pro tip: If you want 15 or more cheese bagels from Solly’s, call ahead and place an order. The mini cheese bagels are perfect for a brunch spread, or for carting back over the border. 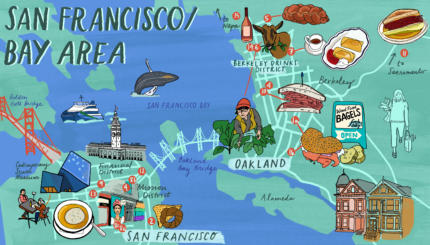