There’s no occasion that can’t be improved with sticky toffee pudding; so why not take one of the happiest occasions on the Jewish calendar, Rosh Hashanah, and make it even sweeter with this beloved British pud? Not only is it infinitely more delicious than honey cake, one of its main ingredients, dates, is traditionally eaten on the holiday.

Sticky toffee pudding, affectionately shortened to STP and known as sticky date pudding in Australia, is a dense, moist cake made with chopped dates and covered in toffee sauce. It’s closer to a North American muffin than a classic British sponge cake, which might hint at its origins — a highly debated topic.

Legend has it that the landlady at an inn in Yorkshire, England invented it in 1907. Others say it was introduced to a hotel manager named Patricia Martin in Lancashire, England by two Canadian air force officers during World War II. Martin shared the recipe (which was later published in “The Good Food Guide Dinner Party Book”) with Frances Coulson and Robert Lee, who served it at their hotel in the Lake District, England under the name “icky sticky toffee sponge”  in the 1970s.

However, a hotel in Scotland claims to have first served STP in 1967. Hmm. They continue to serve it with clotted cream ice cream, which sounds so much better than the classic vanilla. Whoever thought up this dream of a dessert, I am forever grateful.

Dates are often the starring ingredient of STP (use the best you can afford, especially if you can get your hands on Medjool dates, which are so squidgy and sweet they’re a treat when eaten as-is). As luck would have it, dates are also a symbolic food eaten at Rosh Hashanah, particularly among Sephardic communities. In Hebrew, they’re called t’marim (tamar, singular), which sounds like the word “tam,” meaning “to end” and symbolizes a wish for our enemies to cease. If this is a little dark for you, take solace in the fact that dates are an important food for Jews year-round: They’re one of the seven species of Israel, and likely the source of the honey in the biblical phrase describing Israel as “a land flowing with milk and honey.”

The following sticky toffee pudding was passed around various friends until it reached my sister, and eventually my mom. It remains a staple at each of their homes, probably because it’s so versatile: it’s as good when made pareve (non dairy) as when made with butter and it can be made as one large dessert or as individual puddings. Plus, it freezes well.

Note: Double the sauce; you’ll want extra on your pudding and it’s great in a sundae or eaten straight from the fridge once your holiday guests have left a la Nigella Lawson (silk nightgown optional). 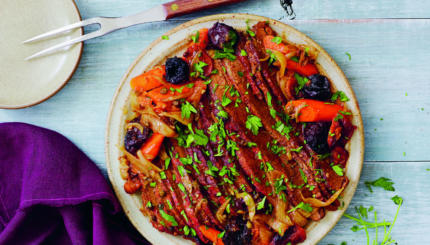 Traditional brisket get a little extra spice and flavor. 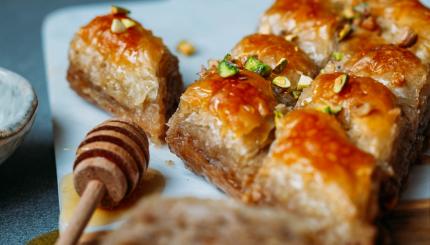 Set your New Year off on the sweetest of notes. 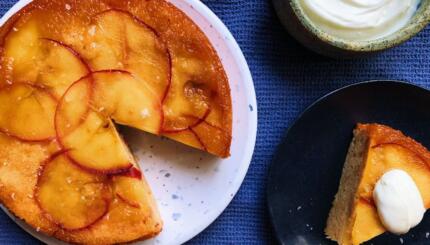 A sweet and perfectly portioned dessert.