I love meringues. I love to eat them and I love to make them. They are so simple, require so few ingredients and can be colored or decorated in so many ways. With that crunchy outside and chewy inside, meringues are always a crowd-pleaser. Meringues are a great Passover treat because they require only egg whites, salt, sugar, and a little bit of food coloring. They’re quick to make but take a while to bake so it’s best to whip up a batch before folding laundry or cleaning your refrigerator, but I promise they’ll be worth the wait. 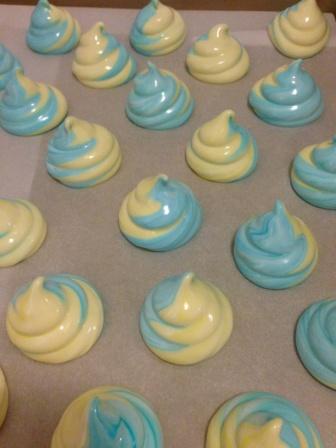 Brittany Wayne grew up in Weston, CT and enjoyed baking with her parents from a young age. In high school, Brittany completed a year-long independent study on cake decorating, culminating in a three-tiered wedding cake. The teacher who graded the study gave Brittany a D because she didn’t believe Brittany made the cakes she brought in each month. Brittany did make the cakes. You can follow Brittany and her cake creations on Twitter, and Instagram.

Use a stand mixer or hand mixer to whisk the egg whites and salt at a medium-high speed until peaks have formed.

Add sugar 1 tablespoon at a time (wait 5-10 seconds between each addition of sugar) and beat on medium-high until stiff white peaks have formed.

Split meringue batter into bowls to add color (I used two colors, you can use as many as you want).

Add a small amount of food coloring to each bowl and fold until color is distributed but some white is still visible (I don’t like to mix all the way because it could deflate the meringue and I like the marbleized look).

Pipe out meringue in a circular motion to create small meringue swirls (depending on your tip, they may have a star shape). Meringues should be 1 inch apart on the baking sheet.

Bake for 90 minutes at 200°F, then turn off your oven and let the meringues cool in the oven. This will let the outsides harden a bit to get that crunchy texture while the insides won’t overcook.