Think Shavuot is just about cheesecakes and blintzes? In 13th-century Egypt, the holiday menu consisted of eggplant with chicken, cooked with sesame oil and flavored with garlic, cubeb (similar to black pepper) and garden mallow, cooked as a spinach-like green. This is just one of the many historical morsels tucked inside Joan Nathan’s new book, King Solomon’s Table: A Culinary Exploration of Jewish Cooking From Around the World (Knopf; with a forward by Alice Waters), 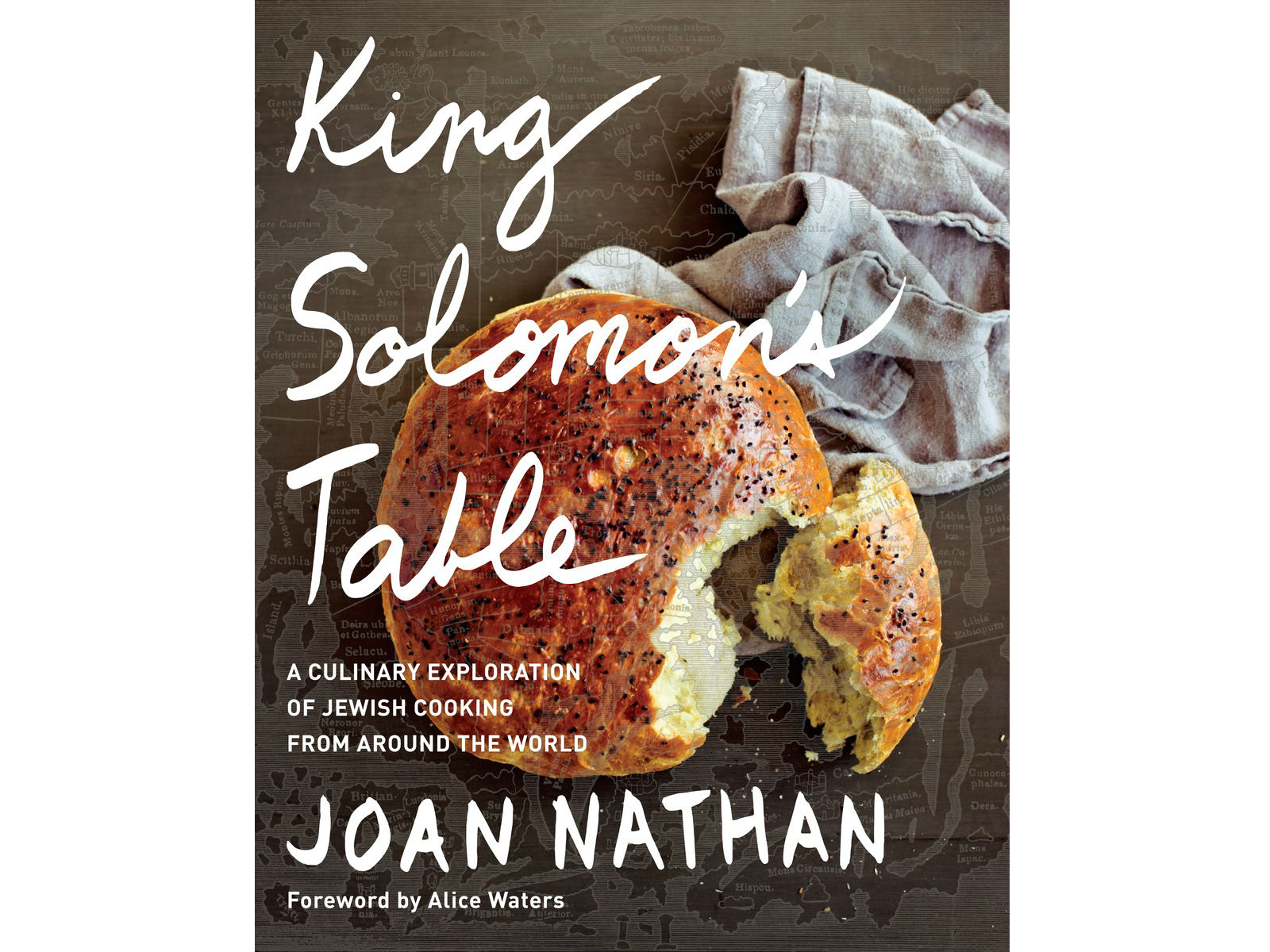 This rare glimpse of the medieval Middle Eastern Jewish holiday meal is among the gems that shine through in Nathan’s newest book, a sumptuous, stunning tour de force that traces the roots of Jewish food back to biblical times and earlier, and offers more than 170 recipes that span the millennia. Tantalizing recipes include Hungarian Apple Pancakes, Yemenite Chicken Soup, Huevos Haminados con Spinaci (Long-Cooked Hard-Boiled Eggs with Spinach) and Libyan Saefra, King Solomon’s Cake. But the soul of  King Solomon’s Table radiates from the warmth of Nathan’s signature stories that accompany the recipes.

I had the privilege of speaking with Nathan recently in Boston, where she visited Mamaleh’s Deli for a book signing that included tastes of Nathan’s smooth, flavorful Hummus with Preserved Lemon and Cumin, and her Carciofi alla Giudia (Fried Artichokes Jewish-Style.) Nathan, a world traveler familiar to cooking fans across the country from her PBS television series, Jewish Cooking in America, is disarmingly warm and an engaging conversationalist. Note: This interview has been condensed and edited.

What drew you to Jewish cooking in the first place?

I was living in Jerusalem, I was 26, working for the mayor [Teddy Kollek, Jerusalem’s mayor from 1965-1993]. He loved food. I realized two things. One, for Teddy Kollek, food broke down a lot of barriers…cultural barriers, political barriers. But the other thing was, I always thought of Jewish food as my mother’s chicken soup, and her challah. Also, [the woman who cleaned my house] was Jewish and she was from Morocco. She made stuffed vegetables and all kinds of delicious foods that were not Jewish, to my mind. She opened the whole world for me.

Are you surprised all these books later that you still find the subject of Jewish cooking and this cuisine engaging?

Why did you set out to write King Solomon’s Table?

Well I didn’t set out to write it. I signed a contract for a modern Jewish cookbook. But then I went to India, to the synagogue in Kochi. There was a sign that said Jews had been in India since the time of King Solomon. That set me on a sort of journey, to learn about King Solomon. I learned that in 1700 BCE, was the first known cookbook. It was written on cuneiform in the Akkadian language on three clay tablets. I wasn’t interested in the recipes so much. But I was interested at looking at what the ingredients were. There was swiss chard, beets, there was even a borscht in one of the recipes. There was wheat and barley. It was surprising.

You have a recipe for shakshuka, a food you love. What is up with its surge in popularity?

First of all, I love going to the restaurant Doctor Shakshuka, that everyone goes to in Jaffa. Israeli food is suddenly hot. It [shakshuka] was something eaten in Namibia. Shakshuka was known as a dish women made they were flirting with another man or were busy with a lover. It was an easy dish to make.

The following recipe is excerpted from King Solomon’s Table with permission from Knopf.

Many families in Libya used to squeeze oranges and bottle the juice to be used all year round. According to Claudia Roden, in her magnificent Book of Jewish Food, using oranges in cakes was a particularly Jewish practice. These cakes, usually prepared with the tart Seville oranges that had to be boiled for hours to tame their bitterness, have been enjoyed for centuries. With sweeter oranges and commercial juice available today, we don’t have to boil them.

King Solomon’s Cake, popular in Libya and attributed to King Solomon himself, is also called saefra (yellow) cake—the yellow comes from saffron. Many versions are studded with raisins, but I prefer this spiced date filling instead. This delicious dairy-free cake was a must for the Sabbath and special occasions. I assume it predates the more elaborate baklava we know today. It was also, according to the late cookbook author Copeland Marks, an aphrodisiac—and, as such, it was served on the eve of the Sabbath to husbands needing help in their conjugal duties.

For the date filling: