The wandering is over. With the much anticipated opening of Mamaleh’s, a new Jewish delicatessen in Cambridge’s Kendall Square, Bostonians no longer have to trek beyond their borders for home-cured pastrami, kreplach, and hand-rolled bagels with house-cured lox. The dine-in and takeout menus offer up traditional Jewish fare including noodle kugel and matzah ball soup, as well as new takes on some standards.

In addition to its gravlax-style house cured lox and pickled herring, Mamaleh’s offers perfectly smoked sturgeon and sable, sourced from Acme Smoked Fish in Brooklyn, according to Rachel Miller Munzer, part of the team that launched Mamaleh’s last month.

Mamaleh’s is the newest in a growing number of Jewish and Israeli eateries and cafes attracting Boston diners in and out of the Jewish community. Tatte Bakery and Cafe, owned by a Tel Aviv native Tzurit Or, recently opened its fifth location, a short walk from Mamaleh’s. Tatte’s cases overflow with Israeli inspired baked goods like a delicately flavored halvah rose pastry and light meals. Inna’s Kitchen, serving made-from-scratch Jewish and Israeli food, is part of the new Boston Public Market, the city’s first year-round indoor local food market.

Mamaleh’s has that nostalgic deli experience with a black and white tile floor and counter seating on bar stools, as well as roomy booths and table seating for 80 diners. Tempting home-baked loaves of moist babka (chocolate and cinnamon), slices of chewy, nut-filled mandel bread, delicately flavored tahini cookies, and gorgeous spirals of rugelach sit atop a glass case with a carrot-lentil salad and other take-out items. Mamaleh’s fountain and bar serves an array of inventive drinks, from homemade celery soda to egg creams, including a version with alcohol. Shelves are stocked with other items for sale, from Jewish snacks to cookbooks and Mamaleh’s memorabilia.

A few weeks before Mamaleh’s opened, the owners hosted a pop-up bagels-and-lox event at their State Park restaurant next door. “’What’s lox?’ somebody asked. It blew my mind,” that people didn’t know, Miller Munzer told The Nosher. “It didn’t occur to us to that we were opening an ethnic restaurant.” In less than a month, the deli is attracting a diverse range of diners. Some daring diners not raised on Jewish fare are experimenting, she said — others know Reuben sandwiches and house-roasted turkey and roast beef.


On a recent weekday, one group of diners steeped in this food couldn’t resist the urge to dig in, starting off with the Jewish Pu Pu Platter, loaded with chopped liver, schmaltz on toast, pickles and kreplach.


“The star was the kreplach, with shredded beef,” said Laura Mandel, executive director of Jewish Arts Collaborative that was holding its staff lunch meeting at a corner booth. “Almost as good as my mom’s, which is saying a lot,” she added. Mamaleh’s version is fried, an updated take on the dumpling traditionally served in soup. The pastrami and potato knish was another big hit. “It was nicely baked, golden and delicious,” Mandel added. She couldn’t resist a rye bread to go.

The emotional response from customers came as a pleasant surprise, Miller Munzer told The Nosher. In the short amount of time they’ve been open, many people are connecting with the food and culture. “This reminds me of my grandmother,” some people have said. Another customer recalled that her aunt used to call her Mamaleh. “It is very touching.”

Mamaleh’s is planning to expand to dinner service soon. 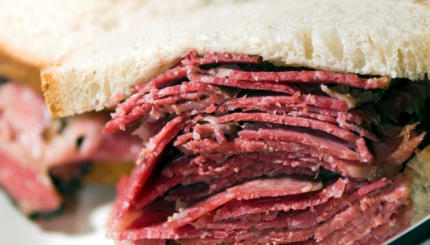