This Miami Jewish Baker Is Now Opening Up a Deli

“Let Jezebel dismiss all of your previously held notions about Kosher dining” reads the Soho restaurant’s website, a lofty claim since so many have tried but almost none have been able to achieve. While the NYC kosher eatery may have had a rough opening this summer, its website promise may now actually be true.

Like many others here in NYC with an eye on the Jewish and kosher food scenes, I was eager to experience Jezebel when it opened. As I wrote last week, prior to my recent re-visit to the restaurant, I wasn’t impressed when Jezebel first opened its doors; in fact I had easily written it off.

But with a new chef (Chef Chris Mitchell), updated menu and attitude overhaul, I can happily share how impressed I was with the establishment. Others have tried to break the mold before without success, but it just might seem that Jezebel has finally done it.

To look around the dining room upstairs at Jezebel, it truly could be any other downtown eatery – young crowd, attractive waitstaff, low lighting, ironic wall art. And then you start to realize the subtle ways in which Jezebel’s kosherness peeks through: the chandelier made of shofars (very cool – where can I get one!?), the faces of famous Jews looking down from the walls, and of course the occasional table full of bearded, payos– wearing men.

There is very little I could critique where the menu was concerned – the risotto was a pretty perfect consistency, good flavor and topped with delightful, crunchy porcini mushrooms that made a nice contrast with the creamy rice.  I also loved the “mac n cheese” side dish which was really impressive considering it had no dairy in it.

By far the stand-outs were actually the wine and the dessert. Before I am a cook or a writer, I am a baker and a well-known snobbish skeptic of pareve desserts. But Jezebel’s chef has truly mastered creating “non-pareve tasting” pareve desserts. The husband and I shared the granita, bread pudding and semi-freddo and all three were exceptional. But among the three the hands down winner from the entire meal was the semi-freddo, made from a base of non-dairy creamer! Like the mac n cheese, the silkiness of the dish was a real surprise. I nearly had to fight my husband to give it back to me. 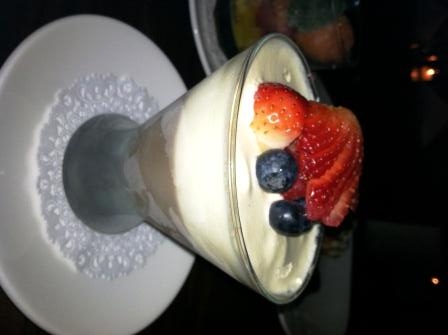 I was less impressed with the hamachi, which I thought could have been sliced thinner and flavored a little more strongly. The lamb chops were good, if not a bit sweet for my taste (the husband, however, loved them) and the braised short ribs were not a disappointment. The flavor of the cumin-spiced meatball appetizer was right on point.

The sommelier was incredibly knowledgeable (and very nice) and the wine list is impressive. My favorite was the O’Dwyers Sauvignon Blanc, which interestingly enough, was also Time Out New York’s favorite wine when they reviewed Jezebel over the Summer. Great minds think alike.

So what next for the ground-breaking eatery? Beginning Monday, January 7th Jezebel will be hosting Havana Nights each week featuring a live band and cigar rollers among other features. Don’t want to cook for Passover? They will be KP and featuring a full Passover Seder for the first two nights of the holiday this March.

You can check out Jezebel’s updated menu, located at 323 Broadway in Soho. I don’t think you’ll be disappointed, that is, unless you are looking to kvetch.

Have you heard about The Hester? Operating out of the Ditmas Park, Brooklyn home of Itta Werdiger Roth and her husband, ...

New Pizza on the Block

The Prime Restaurant Group is really on a roll lately – they are opening a new location for Prime Grill ...