Driven by a lust for riches, the 16th-century Spanish conquistadores set out for El Dorado, a mythical kingdom of gold and plenty. What they found instead was Peru, and plenty of potatoes. And that turned out to be the real treasure.

The men brought some potato plants back home with them and the tubers became lifesavers among the poor throughout Europe from Spain to Ireland to Germany to the shtetls of Russia.

At first, potatoes were met with mixed reviews in Europe. The Scots wouldn’t eat them because they weren’t among the foods mentioned in the Bible. Potatoes only became a staple in Ireland, some say, because Sir Walter Raleigh planted them on his estate there. The French originally thought potatoes were poisonous, mostly because cooks discarded the fat, lumpy part and served the leaves, which can be toxic.

It was only after French chemist Auguste Parmentier won a contest to discover a food that would reduce “the calamities of famine” that potatoes became a staple of the French diet. And everywhere else.

To stop massive starvation among the poor in 18th-century Prussia, King Frederick II forced the peasants to plant potatoes – with consequences for those who refused. (To this day, visitors to the king’s grave in Potsdam leave potatoes as a calling card.) Empress Catherine the Great did the same in Russia, for the same reason.

So, despite Europeans’ initial reluctance to accept this South American staple, it became clear to everyone that potatoes are incredibly valuable. They are easy to grow, and they thrive in all sorts of climates. More importantly, potatoes are filling and nutritious (rich in starch, potassium, copper and vitamins B6 and C).

It’s a perfect food for the poor.

The potato certainly was a blessing for the poorest of Ashkenazi Jews in Eastern Europe, who paid tribute to the tuber by composing a song:

In every culture where the poor depended on potatoes, there’s a recipe for potato soup. France boasts the world-famous Potage Parmentier, made with leeks, in honor of the renowned scientist. In Ireland they serve a St. Patrick’s Day specialty — potato onion soup garnished with bits of crispy bacon. Our Ashkenazi classic,Kartoffelzup, is very similar to both the French and Irish versions.

In celebration of St. Patrick’s Day, I offer a rich, but easy soup based on a combination of Irish potato soup and Ashkenazi kartoffelzup. You can garnish it with crispy kosher beef (or lamb) bacon if you substitute a non-dairy product for the cream. But I prefer the dairy version and use roasted shiitake mushrooms in place of the bacon because it has a similar smoky, meaty flavor. For sheer indulgence, serve the dairy version with a dollop of sour cream on top. Long live the potato. 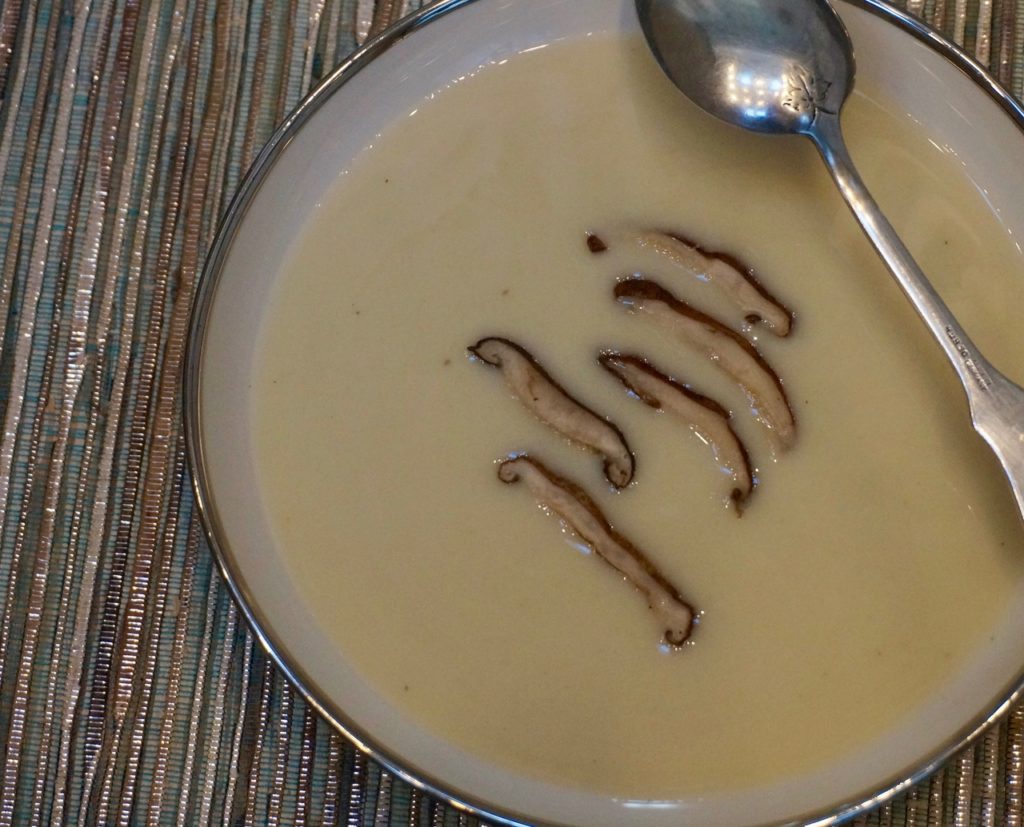 2 medium onions, chopped (or use one large leek plus one onion)

Heat the vegetable oil in a soup pot over medium heat. Add the onions and cook, stirring occasionally, for 2-3 minutes.

Add the potatoes, stir for a minute. Pour in the vegetable stock. Add salt and pepper and the nutmeg. Bring to a simmer, lower the heat and cook, partially covered, for 45 minutes or until the potatoes are tender.

Meanwhile, roast the mushrooms. Preheat the oven to 450 degrees. Rinse and dry the mushrooms and coat them with the 2 tsp vegetable oil. Place on a baking sheet and roast for about 25 minutes or until well browned. Chop or shred to be sprinkled over the soup.

Take soup off the heat and let cool slightly. Puree the ingredients in a blender or food processor or with an immersion blender. Return the soup to the pan. Add the cream and heat through. If desired, serve with a garnish of chopped chives or chopped, roasted shiitake mushrooms. Add a dollop of sour cream if desired. 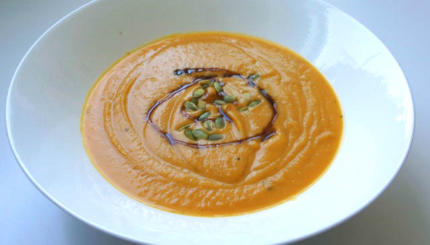 This is one of my favorite recipes to make and to share with others. Every time I make this soup ...

I’m having a love/hate relationship with food lately. By “love,” I mean, you know, I want to eat yummy food ...

Most weeks it’s hard to find a crumb of challah leftover after Shabbat, especially since my husband and I love ...