It’s a new year, a new decade, and of course, there is a plethora of new Jewish food to be enjoyed. Israeli and Jewish restaurants continue to thrive across the country and world, so work up an appetite and head to one (or all!) of these places in 2020.

#Repost @emilyfknox with @make_repost ・・・ Finally got to try @boichikbagels today. Amazing! My how I’ve missed a good bagel. Emily, great meeting you and thanks for indulging me this morning!

Boichik Bagels began as a pop-up, but has now become a brick-and-mortar, much-sought-after bagel shop in Berkeley, CA. They actually opened in what had previously housed Noah’s Bagels, giving new life to bagels in that location. The Bay Area has been hungry for New York-style bagels, and so was owner Emily Winston, who wanted to recreate the crusty, chewy NY-style bagels of her childhood. With lines winding out the door and down the street, make sure to get there early if you want to grab a classic bagel and schmear. They open early in the morning and close when the bagels are all sold out. Indeed, now there are good bagels in California.

Check out where else to get the best Jewish food in the San Francisco area here.

We’re in full-Hanukkah mode over here, with latkes and Sufganiyot on special all month long. And best of all we’re celebrating the foods of the holiday with our #Hanukkah POP-UP! We have a few tix left for each night, so grab them while you can! (Link in profile) 🎉🥂🔥🌈 📸 by @studioxiiiphotography ❤️ . . . . . . #latkes #sufganiyot #hanukkahfood #jewishfood #hanukkah #popup #womeninfood #womenrunbusiness #matzoballsoup #drbrowns

Beetroot opened its doors late this past summer as part of a wave of Jewish-inspired eateries hit the Portland area. Part restaurant and part market, Beetroot prides itself not only on serving up classic Jewish and Eastern European comfort foods, but also sourcing local ingredients for shoppers to bring home. Serving everything from classic pastrami, Russian tefteli (meatballs), plenty of vegetarian fare, and smoked fish galore, each dish is more mouth-watering than the next and stamped with Sonya Sanford’s unique Russian-Jewish-American taste. Beetroot is also a completely female-run restaurant, giving you one more reason to go there and be a patron.

Oh that’s okay. I make LAMB!💥😉 Have a look at our Lamb Pita. 💚🧡 the lamb is spiced with house shawarma spice, which is a sumac and paprika-based blend. It’s then rolled, tied and roasted on the rotisserie, sliced thin, and crisped-up for sandwich time 🧡💚 #hotpita #whatdoyoumeanhedonteatnomeat

Michael Solomonov can’t stop opening restaurants, and Merkaz (translation: center) is the most recent one to open as part of his and partner Steve Cook’s empire. Perfect for Israeli-style breakfast, salads, coffee, and a delicious pita-centric lunch menu, Merkaz also serves up gazoz, an Israeli-style soda starting to creep onto the larger culinary landscape.

Love this guy! Thx to everyone who came to celebrate with us last night the first ever dinner @laserwolf_philly and #masteringspice cookbook! L e & spices @mikesolomonov @handsomhenshaw

Another Solmonov-Cook endeavor, Laser Wolf is set to open this winter 2020. According to Eater, this one will be an “Israeli shipudiya (skewer house) named after the wealthy butcher in Fiddler on the Roof.” It will have a similar menu to Zahav, featuring grilled veggies, meat, and fish, and will be centered around a charcoal grill.

The American Dream Mall, located in Secaucus, New Jersey, is an enormous entertainment enterprise years and years in the making. When it is fully completed, the 90-acre mall will feature a football field-sized ice rink, a Nickelodeon-themed amusement park with rides, the second largest water park in the world, an actual shopping mall, and yes, a food court filled with kosher restaurants. While the specific vendors and restaurants have yet to be announced, this will be the first food court of its kind in the U.S. Once open, visitors can expect kosher Chinese food, fried chicken, Mediterranean fare, and pizza. 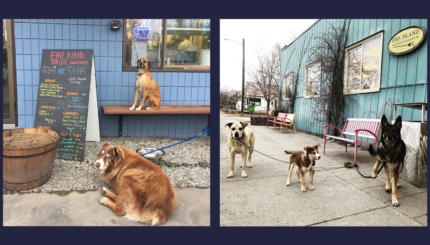 See These Adorable Dogs Outside a Jewish-Owned Alaskan Bakery

You will fall in love with these bread-adoring dogs. 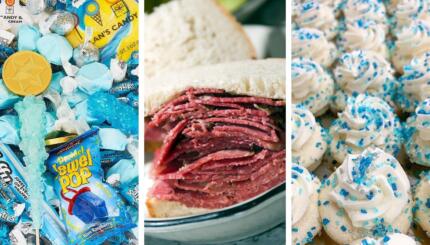 Just because we can’t gather in person for the holidays this year does not mean we have to miss out ...