With its earthy toasted buckwheat groats (kasha) and schmaltz-slicked bowtie pasta (varnishkes), kasha varnishkes is pure Ashkenazi comfort food. First recorded in the mid-19th century Yiddish play “Die Mumeh Sosye” (Aunt Sosya), kasha varnishkes has reinvented itself numerous times, from a kreplach-style noodle dish to the farfelle version we know today. While it has waxed and waned in popularity over the years, there’s something about the simple formula that keeps people coming back; as if on cue, a recipe for the classic dish by Olga Massov recently appeared in The Washington Post.

In the 16th century, buckwheat was a staple grain among Northeastern European Jews because it grew easily and could be stored over the winter months. In Russia and Ukraine, kasha refers to a number of grains that can be cooked into a porridge, but in Jewish terminology, kasha refers specifically to buckwheat. In “The Encyclopedia of Jewish Food,” the late Gil Marks traces the roots of buckwheat-filled dumplings from 16th century Russia and Ukraine — where they were called kashe varenki, which were similar to pierogi — to an easier-to-prepare version that combined buckwheat, onions and flat squares of pasta, called kasha varnishkes.

Eastern European immigrants brought this dish to the United States in the mid-20th century where it evolved to become a quintessential Jewish American staple — common fare for Hanukkah, Purim and Shabbat.

For many American Jews, Wolff’s brand is synonymous with all things kasha. The black box with its gold logo and picture of a kasha pilaf has been a common sight in Ashkenazi pantries for decades (though hopefully the boxes themselves have been changed out from time to time). Founded in 1868 by William Wolff, Wolff’s was acquired in the early 1900s by Birkett Mills in Penn Yan, New York, “the kasha capital of America.” Birkett Mills continues to sell kasha to this day under the Wolff’s brand.

It was the American reliance on convenience and access to dried pasta that led to the shift away from homemade noodles toward the increasingly available farfalle, or bowtie pasta. Caramelized onions also became standard, as the sweet onions did wonders for balancing the earthy nuttiness of the kasha, while providing much-needed moisture in a dish that can tend to eat a little dry.

For Theo Peck, the great-grandson of the founder of famed Lower East Side Jewish deli Ratner’s (shuttered in 2004) and owner of Peck’s, an eatery with Jewish roots in Clinton Hill, Brooklyn, memories of kasha varnishkes loom large. “I grew up going to Ratner’s and started working there when I was six,” said Peck. “Kasha varnishkes is the dish I would eat most often. It’s a bizarre thing because, when you compare it to Italian pasta, not for nothing, but it’s sort of a sad pasta dish. I find it delicious, but it sounds disgusting.” In addition to the standard pasta and kasha, Ratner’s version included creamed mushrooms, making the dish even more substantial. “It was like a gut bomb,” Peck recalled. “You didn’t need to eat for a day after that. I’ve been missing it since Ratner’s closed. It’s probably the thing I miss most.”

Kasha varnishkes is a bit of an Ashkenazi food workhorse. It’s rarely anyone’s favorite Jewish dish, and yet it persists, occasionally surfacing in unexpected pop culture references, like the 1999 “Star Trek Cookbook,” which includes a recipe for “Kasha Varnishkes à la Vulcan,” provided by Leonard Nimoy’s mother. The dish was also immortalized in an episode of “Seinfeld” in which a rabbi in Elaine’s building asks, “Can I offer you some kasha varnishkes?” (She declines.)

The simplicity of the dish invites a number of household interpretations, including adding mushrooms or gribenes (crispy chicken skin cracklings), baking with eggs to create a crispy crust or even topping the dish with a poached egg for another hit of rich, creamy fat. In “The Gefilte Manifesto,” kasha varnishkes get a vegetal upgrade with crisp brussel sprouts leaves, which add color and texture. In 2019, at the East Village location of The Standard, chef de cuisine Max Blachman-Gentile created a loaf of bread that tastes exactly like the starchy side dish. And in his cookbook “Jew-ish,” Jake Cohen includes a recipe for “the flashiest kasha varnishkes you’ll ever make,” calling for assorted fresh mushrooms and herbs.

With winter approaching, it feels like the perfect moment for a revival of the comforting classic — however you opt to make it. 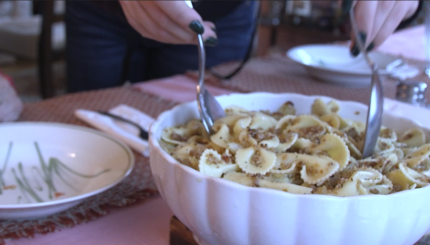 A family recipe for this classic, schmaltzy dish. 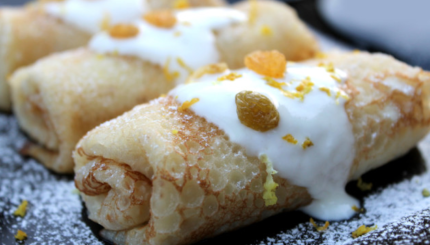 Pickled cucumbers, borscht, kasha varnishkes, and knishes are just some of the stick-to-your-ribs foods that Polish and Russian-Jewish Cuisine is best known ... 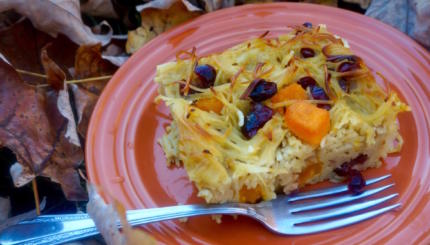 A few years ago I was a judge at a Kugel Cook-off and even a million calories later I was ...