The history is palpable walking over the cobblestones and through the narrow corridors of the Marais in Paris. Jews have been living in this fourth arrondissement neighborhood since the Middle Ages with their own synagogues and cemeteries. Today it’s known for its mix of stylish boutiques, art galleries and traditional markets.

“Marais” simply means “swamp,” referring to the marshy land surrounding the banks of the Seine. But Jews gave it the Yiddish name, “The Pletzl,” or “the little square” and have since filled the neighborhood with their own shops, bakeries and restaurants.

The Pletzl of 2022 is something of a Jewish melting pot with an eclectic mix of Ashkenazi, Sephardic, Mizrahi and Israeli culture. Nowhere is that more obvious than at the restaurants, bakeries and delis of the Pletzl where you can find everything from a fast falafel to a good old-fashioned knish.

Florence Kahn’s eponymous bakery sits in the heart of the Pletzl with a remarkable blue mosaic exterior that catches your eye. It’s a bakery/deli experience that would be familiar to any American with shelves of fresh challah and other sweet pastries alongside savory sandwiches, like Kahn’s signature pletzel. Kahn takes inspiration from the historical pletzel flatbread layered in onions and poppy seeds to create a fluffy sandwich bread with your choice of pastrami, turkey or corned beef inside; topped with eggplant, caviar, red peppers, tomatoes, cucumbers and pickles.

For a hodge-podge of the Jewish-American deli experience and old school Americana, check out Schwartz’s. It’s a portal into 1950s U.S. diner culture with its mix of American staples, like hot dogs and burgers alongside pastrami sandwiches and even their own Reuben. They boast 60 years of family experience, bringing the New York deli experience to Paris since 2009 now with three locations across the city.

Miznon is Israeli dining with a French twist, founded by chef Eyal Shani, with three locations across the city, including in the Marais. The restaurant also has locations in Tel Aviv, Vienna, Melbourne and New York City. It’s fast casual dining featuring fresh ingredients that will keep both carnivores and vegetarians happy. They’re known for their whole-roasted cauliflower, but there’s plenty to explore on the menu from their minty lamb kebabs to falafel and ratatouille — all of which you can order stuffed into one of their pillowy pitas.

La Boutique Jaune offers the same simple, no-frills charm as Florence Kahn. The quaint shop features a variety baked goods and even some groceries — and they’ve been doing it since 1946. It’s also the best place to pop in for a knish.

They don’t do sandwiches here; they do Alfis. What is an alfi? Well really, just a sandwich. The kosher deli’s slogan is: “C’est n’est pas un sandwich, c’est un alfi,” translating to: “It’s not a sandwich, it’s an alfi.” The deli features a handful of Alfi options, stuffing your favorite meats (turkey, beef pastrami and sausages) or roasted veggies between slices of your bread of choice.

Expect to find a line stretching around the block if you come by the wildly popular L’As du Fallafel during lunch. It’s a casual, Israeli falafel joint where most people walk up and take their order to-go. But dining in is an option with various kebabs, shakshuka and shawarma on the menu as well. Stretch it out into a long lunch with some Israeli wine. 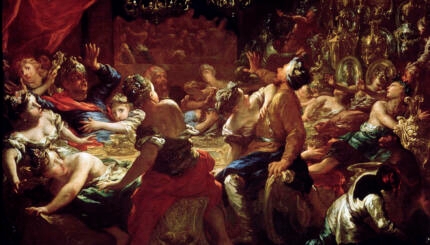