When I was brainstorming my Thanksgivukkah menu I kept dwelling on one of my favorite childhood holiday dishes – what my family calls “Sweet Potato Yum Yum” (or what another family might call sweet potato casserole). You are probably familiar with the heavenly combination of pureed sweet potatoes, margarine, brown sugar and spices, topped with marshmallows and baked to sweet, melted perfection.

Combining the flavors from my family’s Sweet Potato Yum Yum into individual-sized sweet potato latkes topped with toasted marshmallows seemed like the perfect crowd-pleasing dish to mark this once-in-a-lifetime holiday. And it is. Happy Thanksgivukkah! 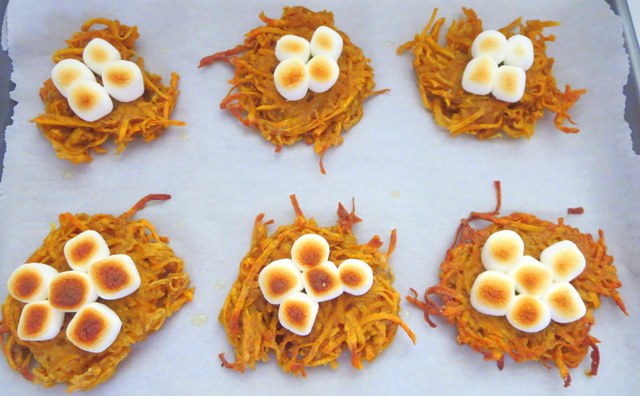 Place grated potatoes in a dish towel and wring out as much excess liquid as possible. This step is key to making sure your latkes are crispy. In a medium bowl stir together potatoes, flour, salt, pumpkin pie spice and brown sugar. Lightly beat eggs in a small bowl. Fold eggs into potato mixture until combined.

Heat oil in a deep skillet over moderately high heat.

Check to see if oil is hot enough by putting a small drop of the potato mixture in the oil. If it starts bubbling it is ready for frying.

Spoon approximately 1/8 cup potato mixture per latke into the oil. Flatten with a spatula and don’t crowd the pan otherwise the latkes won’t crispy properly.

Reduce heat to medium and cook until golden brown, about 1- 2 minutes per side.

Once marshmallows toasted until just brown, remove from oven and serve.