In honor of Hanukkah beginning earlier this week, and an all-around appreciation for starch and fried things, Manhattan-based event planning company Great Performances hosted its annual Latke Fest, touted as the “only festival celebrating latkes in NYC!” This year marks the sixth time well-known restaurants throughout the city came to compete for the title of the ultimate latke. The event also benefits The Sylvia Center, with each year’s proceeds supporting the Center’s mission to inspire healthy eating and cooking amongst young people and their families.  (Yes, yes, there’s a slight irony of frying potatoes in gallons of oil to in effect promote good food choices but I’m pretty sure nobody is complaining.) I had never attended before, and I thought there was logically only one person to ask to come with me: Shannon. 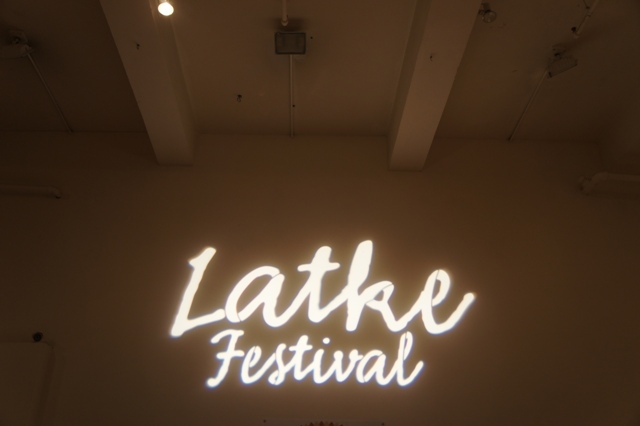 “I know this is Latke Fest but…I can’t eat any more latkes. I have been eating, and testing and frying latkes since October!” This is how Shannon greeted me when we met in front of the Metropolitan Pavilion. About 2.5 seconds later, we were both at The Plaza Hotel’s table enjoying  latkes with red wine braised oxtail, horseradish sunchoke and crispy kale.  And so our tour-de-latke began.

It was a packed house (albeit with ample space to move around), of people and potatoes, and, as one sign warned, also some pork. Chefs and their culinary accomplices together dished over twenty different kinds of potato pancakes. Before we had walked two feet to the next station, we had already made some observations. 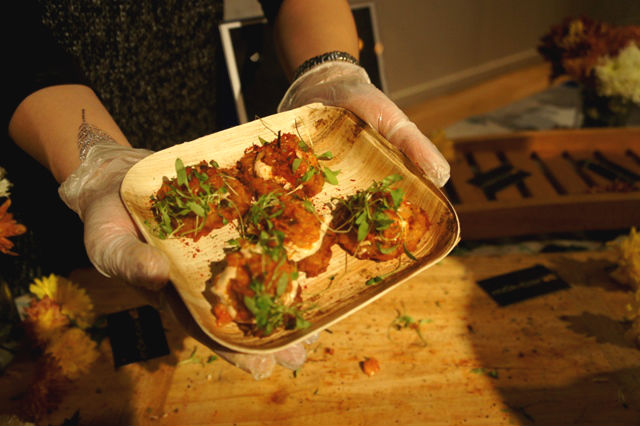 First, the idea of a “crispy latke” might be a challenge in this cooking/serving environment. More often than not we ate delicious but let’s call them “softer” pancakes.  Second,  we were immediately perplexed by the presence of forks. But looking around the room it was evident that there were two kinds of Latke Fest people: those who used forks, and those who, well, just shoved the latkes in their mouths. We were definitely “shovers.”

Which brings me to another thought shared by Shannon: things seemed rather civilized. Nobody was elbowing each other or plowing through the crowd to get to a table like when it’s schmorg time at a bar mitzvah. Shannon was sure we would witness at least one semi-brawl over a station’s last latke. 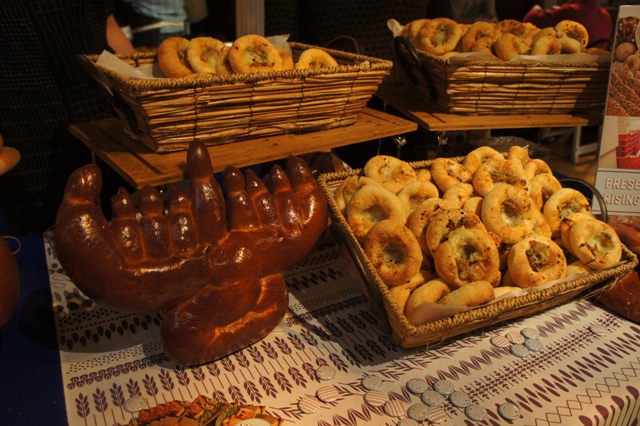 Or, as it turns out, a donut. Or babka. Or a biyali. There were lots of latkes, but also other foods and beverages. Final observation: the grand tradition of offering tangential Jewish foods at the same time in one place was proudly being kept alive here: “Welcome to Latke Fest, have a biyali!” (Dough brought big puffy strawberry-cheesecake and passion fruit filled “sufganiyot;” there was shiny gooey babka from Bread’s Bakery; and a table of beautiful bialys and bread shaped like menorahs from Hot Bread Kitchen.)

Though, to be fair, as Shannon pointed out, isn’t everyone always in the mood for babka? And, I would add, even a donut? In anticipation of being in such a mood later that evening, we had a very brief but serious discussion about trying to sneak extra donuts into our bags. For our husbands. Definitely for our husbands, and definitely not for us (yeah, for us). 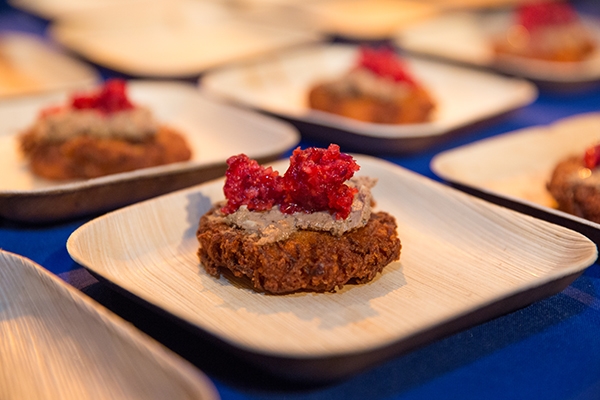 I can’t imagine we were the only ones who tried this. But what I also would have liked to smuggle to the outside world was another of Print’s sweet potato & chestnut latke in duck fat. I actively do not like chestnuts, but various layers of fat probably helped the cause. For Shannon, it was Shelsky’s sweet potato and schmaltz-fried latkes with chopped liver that made all her latke dreams come true.

After at least five more latkes (most of them not bite size), two cocktails, and several instagram photos we were stuffed. Drunk off oil and carbohydrates.  Latke Fest, a success? As we made our way out of the Pavilion, Shannon said “I should have worn my maternity jeans…” So I think that means, yes, a successful evening.

The official winners were coincidentally also some of our favorites: both Print and Shelsky’s took home wins for their latkes, Judges and People’s Choice respectively. (Mae Mae Cafe also tied for Judge’s Choice).

An honorable mention that your kosher bubby might not approve of: Mokbar’s pork latke with kimchi crema. The cool spicy cabbage was super nice against the perfectly crisp potato. 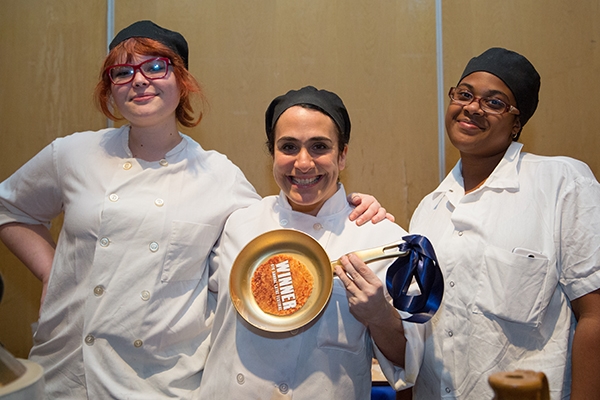 I recently told my parents that they cursed me. The way I see it, when my (probable) Irish genes collided ...