I have long considered myself somewhat a latke expert, with several varieties under my belt, and never a single latke leftover when serving to my friends and family. That is until I had the chance to spend time with Michelin Star Chef Bill Telepan and Pastry Chef Larissa Raphael of the acclaimed New York City restaurant Telepan last week.

Chef Bill Telepan isn’t Jewish, though his latkes might indicate otherwise. In truth, Bill grew up in suburban New Jersey eating potato pancakes every holiday season prepared by his Hungarian mother. He carries this tradition on with his own family, serving up a big Christmas breakfast of eggs, bacon, pancakes and, what else, latkes. 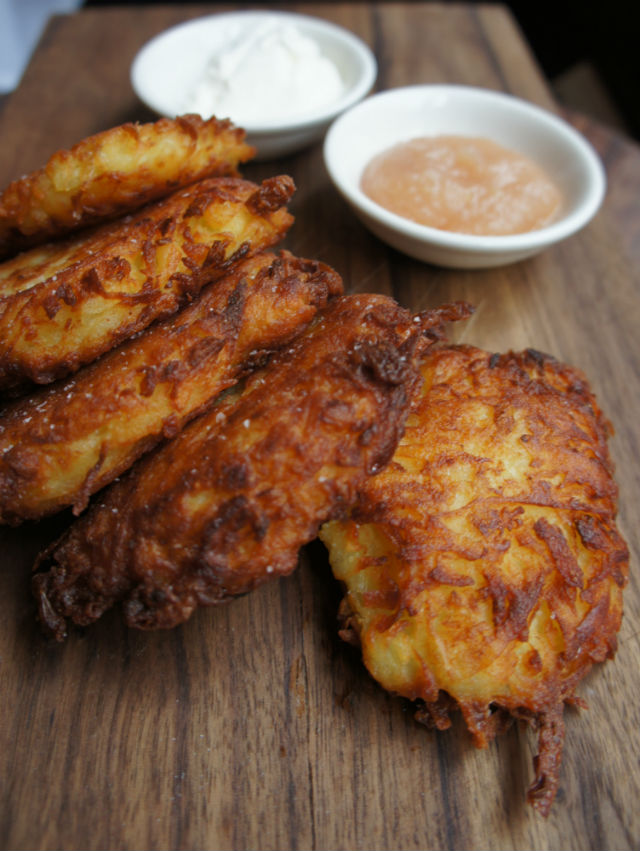 But he has also been serving up latkes at his restaurant for nearly ten years, and even won an award for his latkes at the Annual Latke Festival in New York City several years ago. He likes serving them two ways: plain with sour cream and homemade applesauce, or as an appetizer with smoked salmon and creme fraiche (a personal favorite).

So what can a Michelin Star chef teach a nice Jewish girl about frying latkes? Well, a lot. And it turns out I had been making a couple of mistakes.

Bill shared that you want to keep the natural potato starch in the mix, but also need to remove excess liquid. After mixing all the latke ingredients, he allows the mix to sit around 5-10 minutes. Then he drains it, mixes the eggs with the leftover potato starch, and adds that back into the potatoes.

Don’t squeeze out too much liquid: I had been squeezing out the liquid from my latke each time I formed a patty, but Bill told me you don’t want to do that, because then the latkes will be dry. Instead, lightly form a patty using your hands or a tablespoon to keep the moisture in, creating a fluffier and creamier latke.

Onion is key for Bill, who uses a ratio of 1 small onion to every 1 ½ lbs of russet potatoes. When I tried out this ratio over the weekend, my dad immediately said “wow, great onion flavor” so I guess Bill is really on to something.

Another key element is adding enough salt, both in the mix of the latkes, and then a small sprinkle after they come out of the hot oil. While 2 tsp of salt for 1 ½ lbs of potatoes may seem like a lot, Bill pointed out that potatoes really absorb the salt and need a little extra to bring out the flavor. 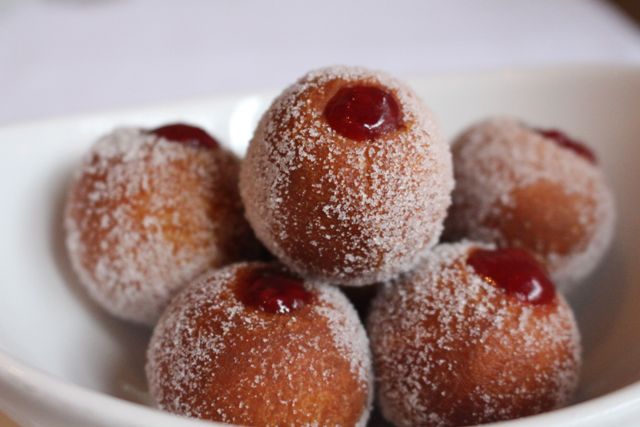 In my time at the restaurant I also had the chance to spend time with Pastry Chef Larissa Raphael, who has been serving up some of New York City’s best desserts for years, who decided to try her hand at serving Hanukkah jelly donuts this year for the first time.

You have probably had a jelly donut around Hanukkah time. And they are fine, I mean what is bad about fried dough. But what I loved about Larissa’s Hanukkah donuts is the balance of rich chocolate ganache and raspberry jam filling paired with delightfully light, bite-sized donut “holes.” After all eating several small donuts is way more fun than trying to stuff one enormous powder-sugar covered donut into your mouth.

If making donuts from scratch seems like a daunting task, Larissa shared that you can actually allow the dough to rise overnight in the fridge, a helpful tip for the busy home baker.  No fancy oil for this frying: just plain old vegetable oil.

So now you can enjoy Michelin Star quality latkes and Hanukkah donuts all from the comfort of your own home.

Latkes and Hanukkah donuts will be available at Telepan from December 16th to 24th and are available both for take-out and in-house dining. Donuts will only be available for the dinner menu. 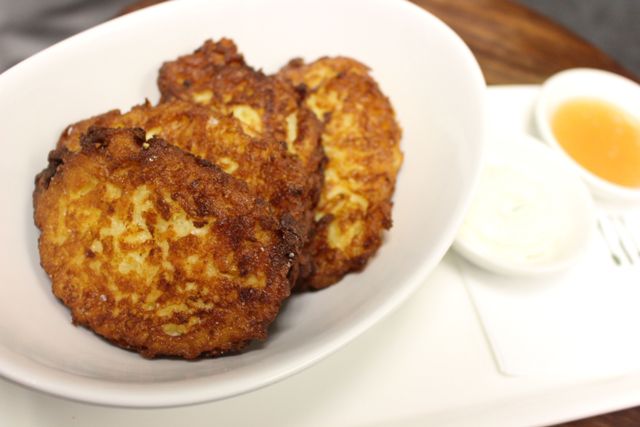 Using the large hole on a box grater, grate potatoes and the onions into a mixing bowl.

Beat the eggs and add them to the starch and combine well.  Add the flour and salt and combine all.

Pan fry in a sauté pan in a generous amount of vegetable oil until golden brown and crispy on the outside, and cooking through on the inside.

For the chocolate ganache:

Mix yeast, milk, flour and eggs in the bowl of a stand mixer, with the paddle attachment, on low speed until combined. Mix in sugar and salt.

Add butter and mix on medium speed until gluten is developed, around 10 minutes. Place dough onto a floured cookie sheet and cover loosely with plastic wrap. Allow to rise to double in size. Another option is to place in refrigerator overnight.

Once the dough is doubled in size, put onto a floured surface and roll to ½ inch thick. Cut with cookie cutter (I use a 1 ½ inch round cutter) and place on a cookie sheet with parchment, or waxed paper, or lightly floured. Cover loosely with plastic wrap and allow to rise for 20 minutes.

Heat your oil to 350. Fry the doughnuts for around 3 minutes. Break one open to check that 3 minutes is enough time and that middle is cooked through.

Roll in sugar. You can fill with chocolate or jam or both.

To make the ganache: Melt chocolate in a medium bowl over a pot of boiling water. Set aside. Place cream in a pot and heat until boiling. Pour over chocolate and mix with whisk until combined.