It is rare that I do anything these days without a podcast for company: cooking, walking the dog, and yes, falling asleep, too. They are, I suppose, the millennial equivalent of having the radio murmuring softly in the background. And just like radio, podcasts are readily available, downloaded in an instant for free on a number of applications (iTunes, Stitcher, and Podbean, to name a few), and cater to any interest or taste — no matter how niche.

My favorite podcast addictions are on the topic of food. There’s something delicious about hearing strangers — often culinary heroes — enthuse about a topic I’m passionate about as well. I’m particularly partial to podcasts which focus on Jewish and Israeli cuisines. And, as an Englishwoman living in New York, listening to British food podcasts connects me to my roots.

Whether you’re British or not, if you love food and podcasts, you’ve got to check out these three favorites. So pour yourself a strong cup of tea and enjoy. 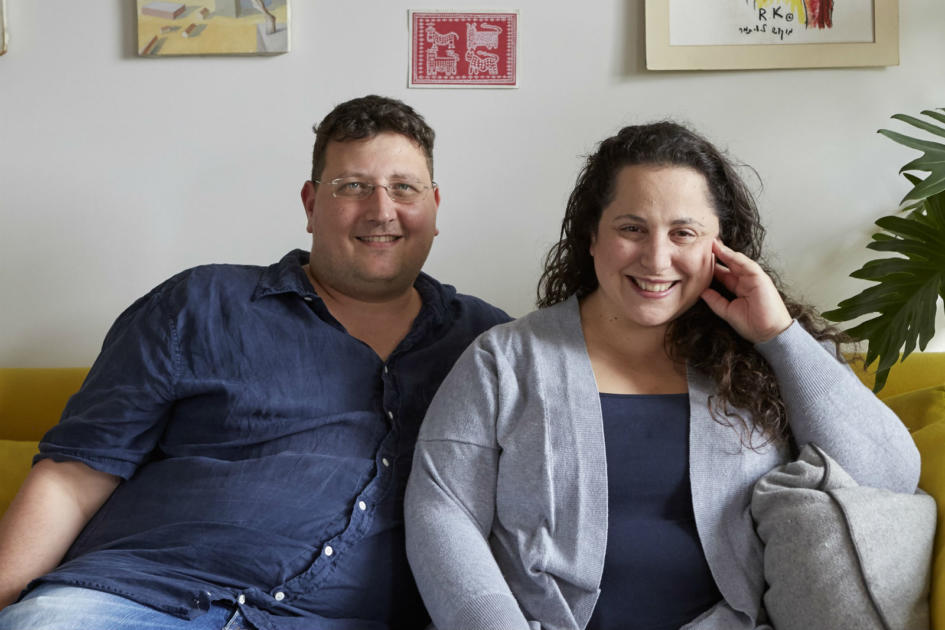 Husband and wife team Itamar Srulovich and Sarit Packer were born and raised in Israel. They both became chefs and moved to London, where they worked in various kitchens, including at Ottolenghi. They opened Honey & Co., a 20-seater diner serving critically acclaimed Middle Eastern home cooking, in 2012 and went on to open a deli and grill house, too.

Their “Food Talks” are held monthly at their deli, Honey & Spice, in front of a small audience, then released as podcasts. Guests range from Netflix star and cookbook author Samin Nosrat to Joseph Trivelli, head chef at the River Cafe to Michael Rakowitz, an Iraqi-American artist of the Fourth Plinth commission “The Invisible Enemy Should Not Exist.”

The stand-out episode for me was when Itamar interviewed Reem Kassis, author of The Palestinian Table. It was special to witness such a respectful, compassionate discussion of Israeli-Palestinian relations. Instead of focusing on what divides these two groups, they focused on the similarities between the two cultures, particularly in regard to ingredients and attitudes toward food, celebrating the many parallels.

Listen for: An incredible breadth of culinary knowledge from experienced food industry professionals.

Yotam Ottolenghi is the undisputed king of Israeli and Middle Eastern cuisine worldwide, responsible for turning ingredients like za’atar mainstream and popularizing dishes like shakshuka. Having co-opened five wildly successful cafes and restaurants in London, and written several international bestselling cookbooks, it was only a matter of time until he blessed us with a podcast.

“Simple Pleasures” was released to accompany his latest cookbook, Simple. Ottolenghi cooks a couple of recipes from it each episode for a variety of celebrity guests who he hosts at home. As far as the menu goes, the braised eggs with leeks and za’atar alongside charred cherry tomatoes with yogurt that he cooks up for Lin-Manuel Miranda sound beyond dreamy. But the candid chat with his old friend Nigella Lawson is a joy to listen to — I almost felt unworthy of being a fly on the wall in the presence of such culinary greatness.

Listen for: an intimate cook-along with a refreshingly down to earth celebrity chef.

Jewish singer-songwriter Jessie Ware may not be the first person you’d expect to host a food-themed podcast, but she does it brilliantly in “Table Manners” alongside her mother, Lennie — a textbook Jewish mother who’s become something of an icon. Together, they bicker contentedly as they whip up feasts which sometimes prove unbelievably delicious and sometimes fail spectacularly.

Though their guests aren’t your run-of-the-mill dinner companions — they deliver sausages to Ed Sheeran’s studio during a recording break (he has four helpings) and invite Sadiq Khan, the mayor of London, over to break his Ramadan fast — they keep it real, squealing hysterically in anticipation of Nigella Lawson’s arrival.

And the two talk about their Jewish roots, like, all the time. They really dig into the Ashkenazi cooking tradition in the episode with food critic Jay Rayner, but go to town with Mark Ronson, who has two servings of chicken soup, four matzah balls, and talks about the Passover seder he attended during Coachella.

Listen for: the laughs. And a gratifyingly normal portrayal of the highs and lows of intergenerational cooking.